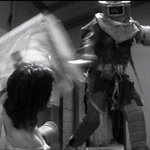 It mostly follows “The Man” (Pierre Jolivet, also co-writer and producer and a prolific director in his own right), sort of a goofball taking shelter from the post-apocalypse in an office building with not too bad of a set up. He has a plant, some furniture, an oven, a cassette deck, a mattress, plenty of space if he ever wants to take up tai chi or breakdancing or anything like that. It’s pretty dusty in there, though. The movie opens panning through his living space and there’s some kind of panting you can hear and you see his naked legs and then you see that he’s humping an inflatable sex doll. Not exactly an iconic entrance like Mad Max or somebody.

Before we continue I want to take a moment to lament the tragedy of this world going to shit before the invention of the compact disc. Some of you might be too young to have ever had to listen to your music on cassette tapes. I tell you, you didn’t miss much. It’s just so depressing to think of this guy’s music tape – which he obviously uses to hang onto the memory of civilization, of a lost art, of soul-replenishing creative expression – inevitably starting to crinkle and warp so that it starts fading in and out and then it gurgles and spits out a tangled up mess that he could probly never repair. I hope he can find some records that didn’t get too scratched up when the shit went down.

But I suppose he’s got bigger fish to fry than home entertainment. He’s on his own and the car-strewn desert wasteland around his building is ruled by the first ever set of typical Besson villains. Yes, they’re gangsters, they even wear ties, and they have a scary boss (Fritz Wepper) who wears a white suit and a fedora.

I really want to emphasize that these guys are wearing ties. That really is not something you usually see in a post-apocalyptic wasteland. Ties can look nice but I think most people would agree they are somewhat constrictive, and not worn for comfort. So these guys really must want to look professional still, despite everything. That’s something.

Anyway, the boss guy has a dwarf slave (Maurice Lamy, DELICATESSEN, READY TO WEAR) who he keeps in a car trunk and sends through pipes to bring him tiny amounts of water. (It’s easier to find liquor these days than to find water.) The Man sneaks around trying to scrounge up parts for a flying machine he’s building back at the office. He has to stab the gang boss with his makeshift spear to steal a car battery, and then his days of peaceful inflatable fucking are over. They come at his walls with a battering ram, and he gets the thing operational and flies out the window just in time. Ha ha, suckers. 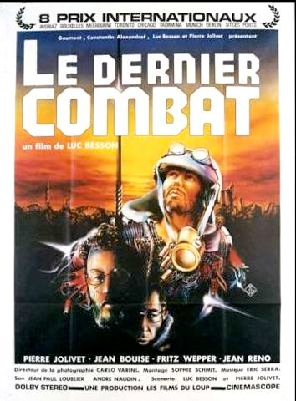 Meanwhile there’s this other Final Battle going on between an old mural-painting doctor (Jean Bouise, I AM CUBA, Z, THE TALL BLOND MAN WITH ONE BLACK SHOE) and some asshole (Jean Reno in an early role). The Asshole (actually “The Brute” according to the credits) tries to trick The Doctor into letting him past the iron bars on the hospital where he’s holed up, then attacks him. No good. When The Man’s flying machine putters out, though, he lands in the area and The Brute goes after him, so The Doctor takes him in for sanctuary and medical care.

The fights in this movie are unique in that they don’t come across as martial artists or knights or anything. They’re just some dudes beating on each other after the fall. They’re basically LARPers who don’t feel the need to stick to historical armor styles and don’t have the resources for that anyway. It’s all makeshift: padding wrapped, strapped and taped around their arms, welding and motorcycle helmets, goggles, flattened tin cans, rubber, corrugated piping. The Brute uses a sword and a spear he made with a sharpened tin can or something on the end that can punch a circle in your flesh.

He’s cocky, too. After The Man gets away from him he grabs his crotch and spits. That’s why he’s The Brute, I guess. He literally has no friends, but I’m not sure he wants any. If he was hanging around a bunch of people he might not be able to relax like when he hangs out in his tighty-whiteys eating fish he stores in an old gumball machine. (There’s a nice scene where the area is blessed not only with rain but with fish falling form the sky. Good things can still happen.)

It is an impressive first feature for Besson. He creates a vivid world out of junk and dirt and dudes with odd faces. There’s a quirky sort of Jean-Pierre Jeunet side to some of Besson’s work, and this leans more on that than the exploitation producer side of him. This also started his decades long collaboration with composer Eric Serra, who gets a little cheesy and fusiony at times (I don’t think I approve of the saxophone), but mostly does a good job of finding not-obvious but effective styles of music to use.

And of course it’s nice to see Reno (who was also in the short film this was based on) right there with Besson in the beginning. Besson has since directed Reno in four other movies and produced another three movies of his.

Eric Serra Jean Bouise Jean Reno Luc Besson Maurice Lamy no dialogue Pierre Jolivet post-apocalypse
This entry was posted on Friday, March 13th, 2015 at 11:23 am and is filed under Reviews, Science Fiction and Space Shit. You can follow any responses to this entry through the RSS 2.0 feed. You can skip to the end and leave a response. Pinging is currently not allowed.