Well, no surprise here. I’m on record as being done with this “scary home video” fakumentary subgenre, and I think it’s not worth doing unless you can come up with a new gimmick to add on top of that gimmick, like CLOVERFIELD did by doing a found video Godzilla movie. PARANORMAL ACTIVITY doesn’t have much to distinguish it from BLAIR WITCH PROJECT or [REC] other than it’s even lower rent, taking place entirely in one normal house with only 2 cast members for 98% of the running time. I didn’t check the credits but if more than 4 people worked on this then somebody wasn’t pulling their weight. 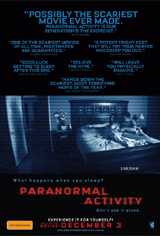 It’s pretty much what you expect in a movie like this, same old shit but cheaper than ever. They do forgo with one part of the formula I laid out in my [REC] review: they don’t start out pretending it’s a birthday video or a school project about agriculture. They say the girlfriend has been seeing this demonic something or other since she was a little kid, now some weird things have been happening in their new house so the boyfriend bought a camera and started filming everything, including them sleeping. (But not having sex. That type of fakumentary is too easy.) Anyway that’s nice, it cuts to the chase.

For a while of course they goof around and don’t take it seriously, but then SPOOOOOOOOOOOOKY shit happens, for example a door opens on its own (SPOILER), there is a noise, etc. Mostly the second one. Then obviously the girl gets mad that he’s taping and there’s about seven or eight scenes about them bickering about it. You know, for drama, tension, etc. Very compelling stuff. Why are you filming this? And then But I want to film this. Like that. I mean obviously you can imagine all the drama they could wring out of a conflict like that. Cinematic dynamite.

But I gotta admit the movie works at times, and it’s for a simple reason: nobody likes them things that go bump in the night. You’re asleep, you hear some loud noise from your living room, that shit gets your heart beating no matter who you are, no matter what it is. Don’t matter if it’s a demon or a crackhead, you gotta go get a baseball bat or something, and therefore it’s a gotta-go-get-a-baseball-bat-or-something adrenaline rush.

There’s no inventiveness here at all, just an understanding of that basic fear, a knowledge that it’s scary to be woken up by a loud growl or thud from your living room. Although the actors weren’t left out in the woods like in BLAIR WITCH this is basically the same approach to scaring the audience: hold on quiet nothingness long enough to create tension, then show normal people freaking out at an unexplained spooky noise. In fact, they also keep doing a thing where the girl stands still as if in a trance, I think it’s a lift from the famous standing-in-the-corner final image of BLAIR WITCH.

It’s short and paced well enough that I was able to stick with it, but unfortunately it’s all leading to nothing, no pay off, just another variation on the ol’ oh no it’s coming toward the camera/tape ends nobody knows what happened ending.

[REC] was much more impressive filmmaking, way more complex scenes, more atmosphere I guess. But to be frankly honest PARANORMAL ACTIVITY worked better on me, it got me once or twice in a primal place. Still, it bugs me that because this made alot of money out of nothing some of my movie web writing colleagues treat it like more than a quickly forgotten one-off novelty. Man, do you really think this thing has a shelf life? Or that anybody is gonna care about the sequel by the time it comes out? Is there some reason to believe this director will be making movies of note in the future? The BLAIR WITCH guys were the kings of Variety Headlineland for a while too, but it took them seven, eight years to direct again, now they just do a line of DTV horror that most people never heard of. Did you guys even know they made other movies? I bet most of you didn’t. And those guys knew how to use film, they used that found footage idea when it seemed pretty new, they had a unique idea about how to get the performances out of their non-actors. So there was at least a little evidence there. Here, this guy could be a genius, but then so could any one of you who haven’t made a movie, there’s really nothing to go on here.

THE EVIL DEAD scared teenagers too, but there was no question Sam Raimi would be making more great movies after that. It’s all there on screen. It has, like, cinematography and shit. Sets. Props. Movie stuff. PARANORMAL ACTIVITY is an idea, THE EVIL DEAD is a bullet packed with movie technique and shot right through your face. You know there’s gotta be more of that in the clip. In fact, as PARANORMAL ACTIVITY talked about a demon following the girl I pictured the demon following Alison Lohman in DRAG ME TO HELL. And I thought damn, I should be watching DRAG ME TO HELL. That’s a movie where a demon follows a girl around.

I guess I was buying groceries or something when everybody decided the found footage thing isn’t just a tired gimmick, but actually a whole new form of storytelling with endless possibilities for self expression. Well fine then, that’s not what I would’ve voted for, but if that’s the decision I gotta ask where does it go from here? Sorry The Little Guy, but I think it’s worn out its welcome as a tool for making movies on a shoe-string, I think the way to make it more interesting is to have it seem like a real video but all kinds of crazy FX shit is happening (like CLOVERFIELD). I mean we can keep trying for more minimalism, but the only way we can go smaller than PARANORMAL ACTIVITY is if it’s one guy making it by himself in his bedroom. After that it’s just a competition to see which guy has the smallest bedroom and then they’ll start having lower resolution cameras until somebody makes a movie that’s just 80 minutes of one black pixel.

I don’t know man, it’s not the worst ever, I can see why it would be a hit at the slumber party. I’ll give it credit for being semi-entertaining, but I prefer movies. This is a video.

another fucking found footage movie fakumentary
This entry was posted on Tuesday, December 29th, 2009 at 3:11 am and is filed under Horror, Reviews. You can follow any responses to this entry through the RSS 2.0 feed. You can skip to the end and leave a response. Pinging is currently not allowed.