You know how it is when you’re a young woman playing drums in a band but you see your boyfriend with another girl at your show so you flip out and get kicked out of the band and you’re depressed anyway because your dad is dead and your mom left town for months so you get real drunk and some guys in a parking lot try to kidnap you but some other dude takes you from them and you get chased by guys hopping around on bladed pogo-stick goat-leg stilts and you pass out and wake up with some dudes hanging out in a warehouse and it seems like this is their home but it turns out they brought you with them when they broke in here to rescue girls from the human traffickers who tried to take you. 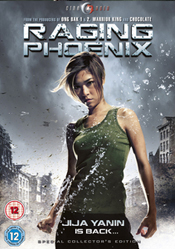 Of course then you go to a beach where they teach you drunken muay thai and reveal that they’ve all had wives or loved ones killed or kidnapped by this organization. And I guess this could be considered a SPOILER but maybe it goes without saying that they actually chose you as bait because they could smell a unique pheremone on you that means the kidnappers can harvest your tears for an extremely valuable perfume/drug. Pretty standard stuff.

This is the second movie starring the thrilling new Thai martial artist JeeJa Yanin (that’s how some places spell it, but as you can see the DVD spells it “JiJa.” I guess she’s still in her Michelle Khan/Michelle Yeoh confusion stage). In CHOCOLATE she played autistic – “a special needs girl with a special need for kicking ass” – here she gets to be more cool and charming. But she also cries alot. There’s alot of the trademark Thai jarring-shift-to-melodrama, but to me some of it was actually pretty effective, like when she looks up at the sky and talks to her dad. (Don’t worry, the clouds don’t form into his face like in THE LION KING. Unless his face just looked like a cloud.)

The new fighting style they introduce is fun to watch. It also incorporates an occasional breakdancing move, with no explanation as far as I noticed. Obviously she looks up to Tony Jaa, but some scenes reminded me of things Jackie Chan would’ve done in the old days. Of course there’s the DRUNKEN MASTER parallels, but the main one for me was a really clever scene before they teach her how to fight. The guys stand behind her and kick the back of her legs so she’ll kick the bad guys, or pick her up and swing her around so she hits people. Basically puppeteering her. Probly my favorite scene.

The story has alot more going on than CHOCOLATE, and it’s alot weirder. There are scenes of “sniffers” going around inhaling digital odor vapors – take that, THE MATRIX. There’s a female bodybuilder villain. There’s a scene where JiJa’s stuck hanging upside down, wrapped in saran wrap. And that thing with the pogo stick legs is never explained or mentioned again after it happens. Maybe that’s just something that happens in Thailand.

Like DRUNKEN MASTER this movie makes light of the act of heavy drinking, and never deals with realistic consequences for a skinny young girl getting hammered every day, unless you count almost getting kidnapped as a metaphor for date rape, and losing in fights symbolic of liver damage and blood alcohol poisoning. But they do have a pretty cool mythic touch – in order to master this style you have to be miserable. You drink because of your problems and channel your troubles into your fighting. She’s had a tragic life and she can use that to fight the good fight or she can let bad people take advantage of it by stealing her tears. She even has a love she knows is pure because it’s destined to be unfulfilled. She loves this guy whose mission is to rescue the love of his life. His love for this other girl makes her love him even more. Throw some Danny Elfman on there and sell this at Hot Topic. (That’s a new catchphrase I’m trying to popularize so I can put it on bootleg t-shirts. “I See Dead People” hasn’t been moving for a long time.)

Although in alot of ways this is more enjoyable than CHOCOLATE it’s not as good in the most important category: the fights. I mean they’re all good, way above average, there’s plenty to like here. But CHOCOLATE was kind of a breakthrough for modern martial arts movies, so I think it’s fair to hope for this one to match or top what was done in that one fight-wise. Most people didn’t like TOM YUNG GOONG/THE PROTECTOR as much as ONG BAK, but you had to admire that crazy tracking shot fight up the stairs, that was a definite case of dumping barrels full of elbow grease and going for the gold. RAGING PHOENIX builds to a pretty cool fight on top of a web of rope bridges. It’s cool, but it doesn’t approach the incredible fight on the side of the building from CHOCOLATE (sometimes called the Donkey Kong fight). So although I got a kick out of this movie (get it, because there is kicking in it, that’s not what I meant but I’ll take it) I couldn’t help but feel a twinge of disappointment. Gotta get out my copy of CHOCOLATE and watch that last fight again.

When all was said and done I hope  she didn’t give up playing the drums. She seemed like she might be pretty good. Also it would leave room for RAGING PHOENIX VS. DRUMLINE.

JiJa Yanin Thai action
This entry was posted on Tuesday, August 24th, 2010 at 1:48 am and is filed under Action, Martial Arts, Reviews. You can follow any responses to this entry through the RSS 2.0 feed. You can skip to the end and leave a response. Pinging is currently not allowed.