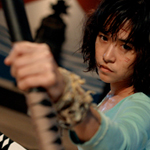 This heart-rending melodrama from Thailand tells the courageous story of Zen (newcomer Yanin Vismistananda), an autistic girl who finds out her mother has been suffering from cancer but hasn’t done anything about it because she can’t afford proper medical treatment. With the help of an orphaned street urchin, and despite her many mental obstacles (she is easily distracted by small round objects, she can barely speak, she is afraid of flies), Zen goes around the city struggling to collect enough money to save her dying mother.

Harrowing, huh? But you know come to think of it I should’ve mentioned that this is from the director of ONG BAK, so the way she collects money is by picking fights with gangsters, battling 15 or 25 guys at a time, doing flips, hopping over and under various furniture and pipes, hitting people with her feet, hands, knees, elbows or head, swordfighting, throwing people off buildings, etc. See, her mom used to be a gangster and all these assholes owe her money, and Zen wants to collect. And it just so happens that one of the things she is fascinated with is the movie ONG BAK. She has focused much of her mental energy on observing muay thai in that movie and in the kickboxing school she lives next to, and has somewhat superhuman hearing and reflexes. It’s just a lucky combination I guess. So look out.

Speaking of lucky, it’s lucky that these are genuinely bad people and not just friends who borrowed money and forgot to pay it back, because I don’t think Zen understands that they’re bad people. She has no concept of good or evil. She’s just trying to collect the money and they’re not handing it over like she thinks they should, so violence ensues like in the movies she sees. I guess CHOCOLATE argues that violence in the media does influence people, and can help treat cancer.

I looked it up – Vismistananda is about 24 years old. But she looks 13 or 14, which makes all her moves and stunts even more surprising. I thought they had a real child actor and I kept looking for a stunt double. The story follows in the tradition of BORN TO FIGHT by being a surprising bummer in contrast to the main attraction, which is of course the long, meticulously choreographed, American-action-movie-embarrassing classic fight scene showstoppers. A 20 minute stretch of one great action sequence after another is immediately followed by a long scene of the poor autistic girl holding her dead mother and crying “Mommy! Mommy!” over and over again, like she doesn’t understand that she’s not gonna wake up. You go from a crack-level action movie high straight into a brick wall. But the buzz was so good you gotta forgive it. It’s a Thai thing, we wouldn’t understand.

Another thing that might be lost in the translation is the title – I know she eats some candy but I’m not sure why the title would be CHOCOLATE. But then I don’t understand what TOM YUNG-GOONG has to do with soup either. Maybe Thai action movies have flavors.

I’m so thankful, because while Jackie Chan is stuck making shitty Hollywood movies that seem to waste the talents he still has at his age, these guys are bringing back that feeling we used to get watching Jackie’s better movies, that feeling that we can’t believe we just saw that, that a human body actually did that. There are plenty of Jackie-esque moves: in one of the earlier fights a guy runs up behind her and she happens to bend over to pick up her dolly, ducking her attacker’s kick, then casually kicking behind her and taking him out. And there’s lots of fighting with props, including a whole bunch of great moves involving a chair. I have noticed that any movie where a martial artist kicks a chair and it stays upright but skids across the floor tends to be a pretty good one. So keep that in mind, filmatists.

Like many martial arts movies you most likely won’t care about the plot as much as the filmatists seem to. (The movie even opens with a dedication to special needs children.) But there is an extremely favorable action-to-non-action ratio and I was impressed by the way each fight seems to one-up the last. What starts out seeming like just a pretty good movie only gets better and better as it goes along. The last half hour or so is pretty much one fight scene after another, going through hand-to-hand, guns and swords. When Zen faces another disabled martial artist (a dude in an Adidas track suit whose twitches are incorporated into his fighting style) it seems like a pretty natural climax. But that scene is long forgotten by the time Zen leaps out onto the side of a building to chase the villain and whack-a-mole his men as they pop out of the windows trying to kill her.

I saw somebody refer to this as “the Donkey Kong fight,” which makes sense because they hop around between different levels of ledges on the side of this building. She kicks heads through windows, dangles from wobbly signs, lassos people around the neck with wires, uses people as a human bridge. The thing I can’t get enough of is that human pinball the thing, where the thugs get knocked down, bouncing off multiple ledges and garbage dumpsters, hitting the street hard, and all in one shot. Admittedly they already did this from moving trucks in BORN TO FIGHT. This one is obviously on a specially designed set and some of the shots might include wire removal and stuff. But still, seeing a stuntman fall off a building and ricochet off of 4 or 5 different hard surfaces on the way down is pretty incredible. It’s a long sequence, and I watched it 3 times. It’s an instant classic. You don’t get an instant classic everyday.

There’s an old cliche that story, characters and filmatic competence are not required in an action movie, that you just want to see shit blow up and guys shooting and punching and maybe some boobs. Of course anybody who would say that is not very observant. If that was the case all the Andy Sidaris and Golan and Globus movies would be equal to or better than DIE HARD. To me the very best are the ones with the full package, where I really do care about the story and characters and there also happens to be breathtaking action sequences.

For some people CHOCOLATE might pull that off. It does have this sentimental idea and a hell of an underdog character with a simple, righteous mission. For me though the whole concept was pretty laughable and clearly wasn’t meant to be, so I wouldn’t go that far. Still, I enjoyed the hell out of it. It’s in that other category of unforgettable action movies that may be weak in some departments but go so far beyond the call of duty in the planning and execution of the action sequences that they deserve some kind of medal and maybe a scholarship named after them. They become undeniable. Whether the story works on you or not, you would have to be dead not to be impressed by the inventive and dangerous work of the choreographers and stunt people here. That type of excellence doesn’t happen in most action movies, but it pops up sometimes in various periods of Hong Kong cinema, the parkour movies from France and now this wave of Thai movies. The fight on the building belongs in the pantheon of great movie fights. Especially in a time when sloppy and indecipherable action sequences are fashionable it’s exciting to see action with this much of a visceral thrill, that forces you to say “holy shit!” over and over again, even if you’re not the type of person to talk to yourself.

Also I think this movie will be a great inspiration for autistic martial artists around the world much like THE CRIPPLED MASTERS was for amputees in the ’70s or ONG BAK was for the girl in this movie.

JiJa Yanin Prachya Pinkaew Thai action
This entry was posted on Tuesday, February 10th, 2009 at 12:43 pm and is filed under Martial Arts, Reviews. You can follow any responses to this entry through the RSS 2.0 feed. You can skip to the end and leave a response. Pinging is currently not allowed.

One Response to “Chocolate”