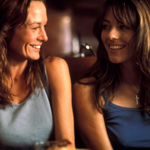 It is from the producer of ON DEADLY GROUND though.

Catherine McCormack plays Jean, a magazine photographer who wants to go to the Isles of Shoals to do a photo essay about the ax murder of two Norwegian women that happened a long ago, both in real life and in the novel by Anita Shreve. (If the movie mentions that the specific island where this happened is called “Smuttynose” then I missed it.) Jean’s husband (Sean Penn) is named “Thomas Janes,” but he doesn’t seem to be based on Thomas Jane. Sorry. Anyway he comes along because his brother Rich (STOLEN’s Josh Lucas) is the one that has a sailboat and can get her to the island. And Rich brings his superhot girlfriend Adaline (Elizabeth Hurley). 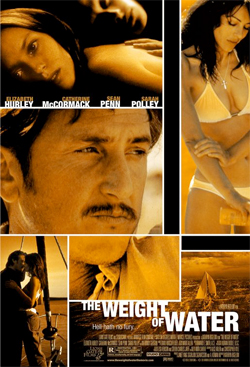 Meanwhile – or actually, not meanwhile, 1873while – Maren Hontvedt (acclaimed director and DAWN OF THE DEAD remake star Sarah Polley) has identified Ciaran-Hinds-with-Hans-Grueber-hair as the man she saw murder two women in her cabin before she ran off and hid in a cave. The movie cuts back and forth between the present day boat trip and the events leading up to the murders, sort of drawing parallels between them, although most of the time I didn’t really understand what the connections were. It reminds me alot of CLOUD ATLAS and even though it’s not nearly as complex it had the same type of disconnect for me. So maybe I’m not good with these intercut-time-period movies.

On the sailboat there’s all kinds of sexual tension. Jean is really obvious about checking out (and taking pictures of) her brother-in-law taking his shirt off. Adaline is even worse about trying to give Jean’s husband a boner. I mean the way she sucks the ice cubes in front of him is obvious enough, she doesn’t have to also rub them on her nipples. This isn’t a huge boat, Jean is right there watching him watch this. You don’t know if it’s too uncomfortable for her to say “hey, knock that topless nipple hardening two feet away from my husband shit off” or if she’s into it herself or what. But she does seem to be jealous and suspicious of the relationship between those two. Which is maybe hypocritical.

It takes a while, but eventually this is mirrored in the other time period when it becomes clear that Maren has a thing for her own brother, and then it gets more complicated. This Maren has a rough life. She lives on this tiny rock and doesn’t seem real in love with her husband. Even if she was it can’t be good to have a husband with a giant Amish style beard. She has to do all the work, including mopping floors and chopping wood. She’s real happy when her brother is gonna come visit, and then completely bummed when he brings a new fiancee named Anethe (Vinessa Shaw) with him. Total twat block.

It gets worse: Anethe is a girly-girl who can’t do any of the work, but is so apologetic and embarrassed about her uselessness that it’s harder to hate her for it. And there’s this pervert guy Louis (Hinds) who Maren has to nurse back to health and he tries to make moves on her and it’s a pain in the ass. And she can’t bear children.

Things get more interesting when it becomes clear that Maren is a fuckin nut. She purposely puts Anethe into a situation where she gets raped by Louis, then convinces her not to tell anybody. When Anethe is later pregnant, and elated about it, it seems like Maren can’t even set up a rape without getting jealous.

There is some Respectable Kathryn Bigelow in here. Both stories are centered on female protagonists, both pretty complex and flawed characters. Like ZERO DARK THIRTY it’s very intent on not telling you what to think about what’s going on. In fact, there are a whole bunch of major story points where I wasn’t sure whether there were supposed to be multiple possible interpretations of the events or whether I just didn’t get it. IMDb forums confirm that many other people are confused or in disagreement about what happens. Most discussion seems to be about what exactly happens in the climax, but I’m more unsure about the black and white shots of Elizabeth Hurley during the scene where she finds out Thomas killed a girl in a drunk driving accident. I think it means that he’s such a sicko he tricked her into re-enacting his memory of a fatal car accident without telling her, and makes her wear a crucifix to remind him of the dead girl. But it could mean she’s picturing herself in the accident, or that the girl in the accident resembled her, or something else. I don’t know.

At times this obliqueness (obscure nautical pun not intended) seems like a storytelling weakness to me, but it also makes for most of the interesting parts of the movie. Probly my favorite scene – and I swear not for the wrong reasons – is one where (spoiler?) Maren and Anethe sleep in the same bed and sort of fool around. Anethe seems like she’s trying to seduce Maren, cuddling up to her, taking her nightgown off, giving her a massage. Polley lays looking at the camera in a long, horrified take. When she finally gives in Anethe seems to be asleep. You don’t know if this is gonna be a horrible misunderstanding, or if Anethe is playing around or just real tired or what. All very uncomfortable and understated, and there are many scenes like this where the motives and feelings are up to interpretation.

The movie is so focused on the women that Penn and Lucas’s characters feel kind of lightly sketched, like female characters usually are. Penn’s is one of his slick egomaniac guys, like in U-TURN. He’s supposed to be a famous poet. There’s a scene early on where a young woman comes up to him and says “Hey, you’re that writer guy, aren’t you?” and he says, “Yeah, William S. Burroughs.” I thought jesus, what a fucking asshole. You write poetry, for chrissakes, and this is the 21st century. If somebody recognizes you you should be hugely flattered, not be a dick.

Later the movie seems to say that he really is a big celebrity and that it’s weird that Jean didn’t know who he was when they first met, so I guess he didn’t have to be flattered. But he should’ve been polite. I’m against him.

It’s kinda weird, it seems like there’s this mystery about who the actual killer was, but it doesn’t really try to fool you about who it is. And ultimately it turns out that the killer confessed and the authorities secretly knew the truth, so it’s not like Jean uncovers something new. She just finds an old letter that explains it.

I don’t know if this is just me, but it seems like there are alot of movies, tv shows and books about married couples and somebody is having an affair or is real tempted to and they struggle with it and what not. Also alot of them, including this one, have a whole lot of gloomy saxophone playing on the soundtrack. I don’t know why this is supposed to be such a hugely interesting and important topic for grownup movies (and I mean that in both the Shannon Tweed and non-Shannon Tweed meaning of the term), but I guess somebody must be into it if they keep doing so many of these. I don’t know why, but I’m more into cliches like “I gotta get revenge on the guy that killed my wife” than “I really wanna fuck somebody that’s not my wife.” Maybe I’m just romantic?

Come to think of it maybe there’s something about this “couples on a sail boat trip” type of story too. They talk about life and relationships, they have some wine, usually somebody dies. No Natalie Wood jokes either, there really are a bunch of sail boat trip dramas and thrillers, right? And I guess it’s not a lifestyle that I can relate to. I’m not the “somebody I know owns a boat” type.

But at least this isn’t your run-of-the-mill version of that story, it’s a pretty weird one and gives you many things to try to decode. It’s just not my type of movie.

I guess even if it was it would probly still be the most boring movie Kathryn Bigelow ever made. But I give it some credit. I got more interested as it went along, and that’s better than the other way around.

ax murders Catherine McCormack Ciaran Hinds Elizabeth Hurley Josh Lucas Kathryn Bigelow sail boats Sarah Polley Sean Penn
This entry was posted on Friday, January 18th, 2013 at 2:46 am and is filed under Drama, Reviews. You can follow any responses to this entry through the RSS 2.0 feed. You can skip to the end and leave a response. Pinging is currently not allowed.

30 Responses to “The Weight of Water”