Nielsen plays Jack Potter, an old fashioned private detective, lonely, out of money, etc. He takes swigs from his flask but it turns out it’s just Pepsi because he has ulcers. He’s not the kind of buffoon that Nielsen usually plays, though. His hair is spikey, he has a five o’clock shadow and he looks kind of macho with his short-sleeves and gun holsters. The main difference is that he knows what he’s doing, he’s not an idiot. Also he keeps ninja stars in his van. But it’s weird because he narrates the whole thing in the exact voice he uses to narrate NAKED GUN and POLICE SQUAD. And that’s a problem.

The baby-faced Lochlyn Munro (FREDDY VS. JASON) plays Marty Mackenzie, a Hollywood chump who blows all his money staging a shitty play where he’s a detective. Then he meets Potter and begs him for a job, finally gets it by promising to work for free if he can sleep on the couch. Potter tries to get him out of his hair by sending him to a small town in Oregon to spy on a cheating wife. 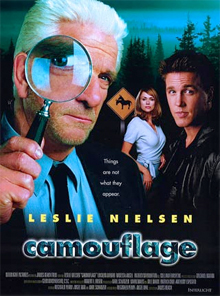 This type of movie makes me think it must be tricky as hell to be a screenwriter, because I can sort of picture it being a decent movie if it was executed completely differently. I think the tone was probly supposed to be a little like MIAMI BLUES, like a serious crime story but some crazy, funny shit keeps happening. But director James “Stacy’s brother” Keach play it more like an out and out comedy. The music is by Mark Mothersbaugh and that guy can be good but here he’s just constantly reminding you how wacky and eccentric this is. Nielsen has alot of corny lines that I can picture being funny if Billy Bob Thornton said them. Like, “When in Rome, do like the Romans. But Marty wasn’t in Rome… Rome’s in Italy.”

A stupid thing that bothered me in this movie is at the end when Marty has taken care of the villainous plot but Potter fails to show up to back him up. The sheriff tells him sorry but Jack died back there when a tunnel collapsed. When Marty runs in to try to save him the sheriff is surprised and yells that it’s suicide. But he says he has to do it because it’s his partner.

The implication is that the partnerly bond is incredibly strong, that no one could possibly understand but when your partner is in trouble you will do the craziest most outlandish things to help them. But this partner shit is simply not necessary, because normally if somebody was trapped under a bunch of logs, even if it was a stranger or somebody you think is a dick, I think most people would, like, try to do something. And there would be no reason to explain that you did it because he’s your partner, because nobody would ask “Why the fuck did you try to lift that log off of that guy that it fell on top of that was gonna die if you didn’t use basic lifting to help him?”

What the fuck kind of sheriff is that? A mine collapses on a guy and he just figures there’s nothing he can do and leaves? I don’t think that’s how it works. Especially in a case like this where Jack’s face is visible and he’s clearly alive and able to communicate. Admittedly there’s a nest of snakes there (total ripoff of TRUE GRIT) but still, you gotta be the world’s laziest sheriff to just give up at that point. Here are a few better options:

1. try to pull him out
2. go find people who are not sissies who would try to pull him out for you
3. even if you are hopelessly pessimistic and assume he’s doomed at least get someone to help get the body out for burial
4. find somebody to give a nice sermon at the funeral
5. get Pepsi to sponsor a mine safety fund in his name

Well, that was a pretty shitty way to pay tribute to a dead guy – find one of his movies you’ve never heard of and tell you it’s bad. Oh well. He tried. Pour one on the curb for Leslie Nielsen.

Billy Bob Thornton Leslie Nielsen Lochlyn Munro Tom Epperson
This entry was posted on Monday, January 21st, 2013 at 1:35 pm and is filed under Comedy/Laffs, Crime, Reviews. You can follow any responses to this entry through the RSS 2.0 feed. You can skip to the end and leave a response. Pinging is currently not allowed.