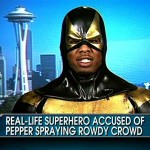 With all these questions surrounding JUSTICE LEAGUE (will it be delayed by the strike, who will be cast, when will Vern stop telling us about how awesome George Miller is) there is one fact that most of us have missed: a Justice League movie has already been made starring your favorite Justice League heroes Superman, Batman, Wonder Woman, and of course The Incredible Hulk. There are also guest appearances by lesser heroes like Ghost Rider, Marilyn Monroe and Charlie Chaplin. 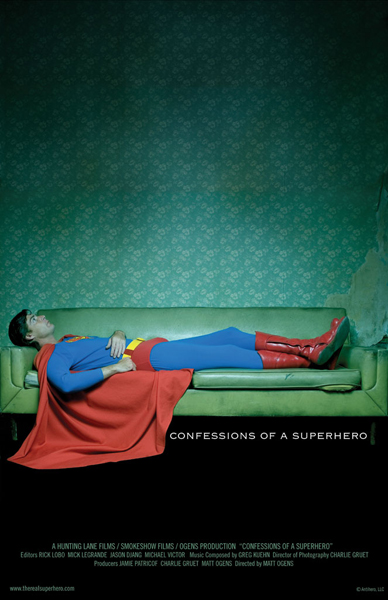 This version is called CONFESSIONS OF A SUPERHERO and it comes out on DVD in January. It’s a documentary about those people who dress up as cartoon characters on Hollywood Boulevard, pose for pictures with tourists and then guilt them into giving them tips. We all remember the notorious Spongebob incident. Spongebob was probaly too dangerous and unpredictable for a camera crew to follow, so instead the movie focuses on Superman. You may have seen this guy interviewed on TV before. He looks eerily like Christopher Reeve, but he’s really skinny, like Superman got the space cancer. It’s disturbing to look at. His friend Batman looks alot like George Clooney. Wonder Woman doesn’t look like anybody famous, but she seems like a nice girl. And the Hulk is just a guy in a costume who blacks out on hot days. They’re all aspiring actors, some aspiring harder than others, and at first they seem pretty normal and reasonable. Except Superman.

Sorry Kryptoniacs, but it’s true. Superman is a total wear out. The movie is really cleverly put together, revealing information a piece at a time so that the picture keeps changing and keeps you guessing. At first Superman just seems like kind of a weirdo with a strange job. And full of shit. In the interviews he keeps saying “We don’t work for tips, we accept donations,” but in the footage him and Batman keep saying “And we work for tips” and holding their super hands out after a photos is taken.

But I didn’t figure him for a Superman fetishist like my old newsgroup pal Kalelfan. This only becomes clear when he goes to his apartment and starts showing his shelves and stacks and piles of cheesy Superman memorabilia. I thought for a second it could be just research materials but by the time he takes out the crude cardboard dioramas he made of scenes from those corny old movies I wanted to back away slowly.

The movie doesn’t explicitly make fun of him except when he brags to a tourist that he’s also an actor in movies and TV, and they have a quick cut to him as an extra in some terrible kid’s movie, wearing a wig and dancing behind a kid and a dwarf. He mentions that his mom was an actress but it’s not until 30 minues in that he says his mom was Sandy Dennis.

Holy shit! Sandy Dennis gave birth to this freak? Or did she find him in a cornfield and adopt him? They start interviewing some of Sandy Dennis’s relatives about her. But it’s not for another 30 minutes or so that they reveal they don’t believe Superman is even related to them, because Sandy Dennis never had a kid. And she probaly would’ve mentioned it to them if she did.

Batman’s stories start to fall apart too. At first I accepted him as a normal guy, he even laughs about his friend’s obsession with Superman. But the more he talks about his anger, his dark past, special forces training, mafia connections… the more it looks like the cape is there to hide the fact that his pants are on fire. There’s a really uncomfortable scene where they get him to talk to a psychiatrist (in costume) and he starts to tell a story that involves his wife getting murdered and him getting revenge on the culprits. But he doesn’t seem to expect that the shrink will ask him to clarify details of the story and he starts to stumble. Whoops, I guess a psychiatrist is not gonna think you’re cool when you claim that you murdered somebody.

Between Superman and Batman the movie could easily be a freak show, like TREKKIES, and a good one. But it’s nice that they have a couple sympathetic super heroes too. Wonder Woman seems real nice, and there are moving scenes as her and her husband are clearly growing apart on camera. (not over Wonder Woman related issues, don’t worry. No invisible plane arguments or anything.) Hulk seems like a cool guy too. He shows the cameras the spot where he used to sleep when he was homeless. Then he gets a part in FINISHING THE GAME. So you can feel good about Hulk, he knows the director of TOKYO DRIFT now.

There are lots of funny moments, like when Superman is showing a new Ghost Rider the ropes, says super heroes can never smoke, and Ghost Rider argues that he can because “he’s made of fire.” And there are tons of uncomfortable scenes like when Superman goes out of town for a Superman convention, and you’re relieved that he can’t pressure people for tips anymore, but then he still makes you squirm by constantly bugging everybody to “remember to vote for your favorite Superman” in the costume contest. But unlike many lesser documentaries they don’t try to play that up with a bunch of wacky music or cheesy graphics. It’s class all the way with a downbeat, gloomy score and nice photography. The only little show-off maneuvers are some artistic portrait type shots of the people staring into the camera or (against Superman’s rules) smoking in costume. And having them talk to the psychiatrist is obviously a set up. That kind of goes against the documentarian’s code of honor I think, like in CANNIBAL FEROX when they have that little animal on a chain and a big snake “just happens to come along” and eats it. But I didn’t really mind because it wasn’t like they were tricking anybody, and in fact those scenes sort of give you the idea that Batman has been lying in other scenes. Where’s the Joker when you need him?

My one major compaint is about one of the people they interview, Drew McWeeny. He only has one line at the beginning, and not a very good one. It seems like they took it out of context, he doesn’t really get to comment on much. Next time let’s see a little more effort to not get cut out of the movie, Moriarty. You can do it.

Also there’s nobody dressed up as Blade or Ziggy. That was disappointing. I bet alot of people would want to get their picture with Ziggy. Come on guys, who wants to be Ziggy.

the Nerdening of America
This entry was posted on Thursday, December 13th, 2007 at 9:40 am and is filed under AICN, Comic strips/Super heroes, Documentary, Reviews. You can follow any responses to this entry through the RSS 2.0 feed. You can skip to the end and leave a response. Pinging is currently not allowed.

3 Responses to “Vern Deflects Bullets And Ties On A Cape To Review CONFESSIONS OF A SUPERHERO!”