For years Robin Hardy, the director of the original non-mega THE WICKER MAN, has been trying to make this movie based on his novel Cowboys For Christ. It’s supposed to be a “spiritual sequel” dealing with the same themes but not the same characters or story. I expected a barely watchable but hopefully interesting mess, but that’s not what it is. Without being directly connected to THE WICKER MAN it pretty much takes the WILD THINGS approach to sequelizing: kind of a loose paraphrase with all the details changed. It’s clunky at times and always completely unnecessary, but surprisingly compelling.

It doesn’t take place in the same place, there’s not a missing persons case to follow, it’s not the same cult. Christopher Lee in his tiny “special appearance” plays “The Old Gentleman” who passed the religion on to the current leader, but it doesn’t seem like he’s supposed to be Lord Summerisle (or that his scene needs to be in the movie at all). It’s still the same basic idea, though: outsiders (a couple this time) are welcomed into a very old-fashioned rural community, they try to honor and learn about the local customs that uncomfortably rub up against their prudish Christian beliefs, they don’t know they’re being groomed for a ritualistic sacrifice as part of a May Day celebration. 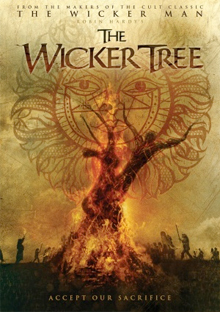 The story follows a Texan pop-country star named Beth Boothby (Brittania Nicol) and her cowboy fiancee Steve (Henry Garrett) on an evangelical mission to Tressock, Scotland, because they found out the people there don’t believe in angels. A Ben Kingsley lookin motherfucker named Sir Lachlan (a guy from RAMBO named Graham McTavish – it was written for Lee, but he injured his back on the set of THE RESIDENT) and the rest of the community welcome them with open arms, humor them by listening to their hymns, and convince them to take part in their upcoming May Day celebration.

Like most fictional celebrities I have a hard time believing this young lady is a beloved superstar. Or I did at first. But since she seems to be doing her own singing I started thinking maybe she was some girl from American Idol that actually is a big star but just doesn’t seem like one because she got there by being on a game show. I don’t know. I’m out of touch.

Anyway the idea is she became famous as a sexually suggestive singer (a country Britney Spears I guess) but has since become a born-again Christian. Beth and Steve wear chastity rings (but not belts) and swear not to fuck each other until marriage, even though they’re tempted. Poor Steve has it extra bad because while trying to keep it in his pants her video comes on TV and she’s shaking her ass around singing double entendres and shit.

Their abstinence is contrasted against the aggressive sexuality of the Tressockians as they celebrate virility in their May Day festival. Women of all ages seem to flirt with Steve. And like THE WICKER MAN is loaded with performances of different traditional folk songs and what not. The Texans get to sing their spirituals to the locals but they also have to hear an older gal sing about cherries and grapes getting ripe but in my opinion it’s more than just fruit in those lyrics. That night, in the movie’s goofiest image (intentional, I think) Steve is laying in bed and imagines Beth laying next to him covered in fruits and berries. She just fades in next to him like in a cartoon when an animal looks at a guy and sees him as a steak.

It turns out the local obsession with fertility rites is not just tradition, it’s very important to them because an accident at the nearby nuclear plant has rendered them all infertile. There’s only one kid that lives there. Same sort of thing that happens in towns plagued by Freddy, except no Roseanne and Tom Arnold cameo in this one.

I totally forgot about this until just this moment but one time in another decade I was staying in a college town and got invited to an outdoor party. Turned out it was actually a pagan May Day celebration, which is not my religious background but what the hell – when in the woods, you know? They didn’t burn anybody alive or have any wicker things, but they danced around a maypole, which they explained represented a phallus. Before that I thought May Day was that thing from the Family Circus comics where the kids hang flowers from doorknobs. Turns out it’s about hippies worshipping a giant dick. That was the last time I celebrated May Day.

Also one time I heard a weird sound in the distance, a sort of vibrating hum that kept getting louder, like a swarm of bees coming my direction. All the sudden a dude rides by on a bicycle blowing on a huge didjeridoo. True story.

Steve could never do that but he is a talented horseman and also impresses the locals with an evangelical card trick where he correctly calls each card he pulls out of a deck and says what part of the Bible they remind him of (3 reminds him of the Father, the Son and the Holy Spirit, for example). I like this scene because even though you’re pretty sure these guys are part of a human sacrifice cult they watch the entire trick and laugh with delight when he pulls it off. They’re like “I love this guy!” even though they probly got something pretty bad planned for either him or his lady or both, in my opinion. Or maybe they’re innocently trying to get them to switch churches.

Hardy – whose only other movie since THE WICKER MAN is 1986’s THE FANTASIST (I haven’t seen it but you can find it on VHS and PAL CODE 2 DVD) – is not the slickest filmatist. He has some real pretty shots but also some plain ones, some awkward performances and transitions, and most of the evangelizing that is supposedly the reason for the whole story is brushed over in a sitcom style door-knocking-and-rejection montage. Hardy describes it as somewhat of a black comedy, but if so most of the comedy is just clumsy stereotypes about Texans and Christians being doofuses. But the colorful characters and odd little idiosyncrasies made me sort of enjoy it. There’s a local simpleton henchman type who has a pet raven, and sometimes (for no good reason as far as I could tell) it switches to the bird’s POV. There’s a polite lady that has kind of a pleasant Mrs. Hogget sort of personality even when she’s helping oil up a drugged naked abductee.

If you like boobs, there are some. Nothin as weird as that lady dancing naked against the wall, but I don’t know what could match that. To promote the sect’s sex-positive stance one of their most important members is the town ho, Lolly, played by an actress with the even better name of Honeysuckle Weeks. She has a pretty good way of seducing horny abstinent Christian cowboys which involves standing naked in a river and talking to them. I guess there is some pretty good black comedy in the way the Christians try to be really open-minded and cool to the point of putting up with way too much pagan business.

There’s one cultural difference that our American protagonists take advantage of: one of the bad guys attacks while wearing a kilt, and there’s a shard of glass nearby. Next thing you know the Mrs. Hogget lady’s got him on a slab telling him they “nearly severed one of your googerlies.”

Obviously McTavish is no Christopher Lee, but he’s pretty good. I like that he compares himself to Monty Burns. It’s such a real way for a guy like that to ingratiate himself with us. If he knows about The Simpsons he’s just a regular guy, right? He’s one of us! It’s the same thing the protagonists do for their evangelism, they sing good ol’ pop country for the Lord. Or in Seattle they have these young hipster evangelists with tight jeans and wallet chains, you’re supposed to think maybe they listen to the same bands as you so you should go to church with them and they could explain why your gay friends and relatives shouldn’t be allowed to get married. (That’s these particular sideburn-sporting dicks, not churches in general.)

Steve at first seems pretty bland, but he kind of grew on me and seemed to have a pretty authentic clean-cut-cowboy-evangelist-that’s-too-nice-for-you-to-hate. It seems like he’s kind of fooling himself in this relationship but even after he wises up he’s kind of an aw schucks boy scout and I respected him for it. I wish I warmed up to Beth in the same way, because she has a couple good moments toward the end that would be alot better if I liked the character more.

It would be pretty hard to match the WICKER MAN’s ending, since it was a surprise, both what happened to the sergeant and what Nicolas Cage got to yell about in the remake. THE WICKER TREE’s doesn’t have the same kind of impact, but I like how they mixed it up. It plays with your expectations and in a way sort of shows you a couple variations on how you could end a story like this. There’s a decent horror movie gimmick or two involved in what the cult intends to do with the cowboys for Christ, though it’s weird because the titletacular wicker tree doesn’t seem very significant to their ritual.

I don’t know if I really recommend THE WICKER TREE, but you could do worse. Do what thou wilt.

Christopher Lee cults May Day pagans Robin Hardy
This entry was posted on Tuesday, May 1st, 2012 at 2:04 am and is filed under Horror, Reviews. You can follow any responses to this entry through the RSS 2.0 feed. You can skip to the end and leave a response. Pinging is currently not allowed.

17 Responses to “The Wicker Tree”