So anyway the dude who goes after him is kind of a sissy type fella by the name of Ichabod Crane. Apparently he’s some sort of cop although without a uniform or a badge I’m just going to let it slide and say, okay, this dude is all right with me. Even if he’s wearing some kind of lady’s scarf which I guess was considered less taboo at the time this takes place. 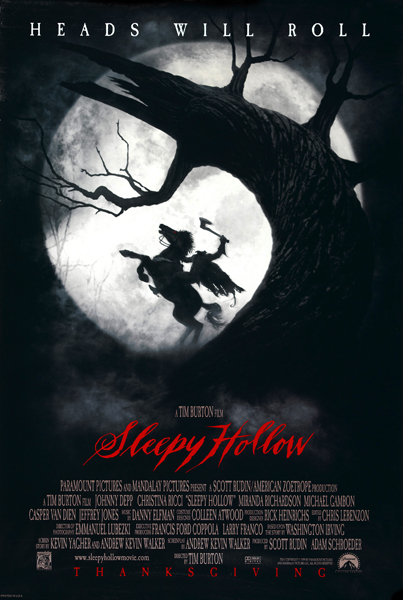 Now you know I’m thinking it, so I’m just gonna go ahead and say it, this dude Ichabod would NOT last long inside. He’s afraid of a headless horseman, afraid of a headless dead guy, afraid of a hairy spider. He hides under his blanket and won’t come out of his bedroom he’s so scared. I don’t know what the fuck a pretty janey like this is gonna do when he has to shower with Mickey Deadly, a samoan dude with the devil tattood on his dick.

But I gotta be honest, this hiding under the blanket shit is something you don’t see a whole lot in movies, so I gotta give it points for refreshingness. I don’t want to see everybody start doing this in the movies, I’d rather have more walking bare foot on glass as in the film Bruce Willis’s Die Hard. And if van damme tried the hiding in the bed he’d probably work in some kind of splits and that would just be kind of stupid. But this one time in sleepy hollow it’s kind of cool, I like it.

You see, you can’t expect Ichabod to be a fucking ANIMAL like a lot of these guys in prison, who lift weights EVERY FUCKING DAY and use rookies as punching bags and wouldn’t be afraid of a rabid gorilla on PCP. That’s just not Ichabod, Ichabod is one of these scientific rational type guys, trying to use an encyclopedia and a math chart to reduce life into a formula. He’s always trying to think, trying to figure things out, deep in concentration in that brainy head of his. You might think this is an advantage he has since the motherfucker he’s up against has NO head, but that’s where there is an interesting twist.

You see the headless horseman, having no head, doesn’t overthink things. He just overreacts. I mean you should see how many heads this guy chops off, its probably four times as many as I’ve seen in my entire life. What Ichabod has to realize (with help from a foxy gal in his dreams, possibly his mother) is that you can’t just think about all this stuff. You gotta stop thinking, head off into the haunted woods with only a little boy to protect you, and look this little prick the horseman right in the stump.

And in order to do that Ichabod has to do what every man must learn to do at some time in his life, stop thinkin and start instinctin. I know this is what he did because somehow the dude figures out that somebody is controlling the headless horseman, and I don’t know how the fuck he comes up with some random shit like that unless its instinct.

Instinct is what brings the best things in life. Its what told me to go see die hard the first time even though it starred a dude from moonlighting. Its what told me to become a Writer and to start a web sight about the films of cinema, despite the prejudices against ex-con film critics. And its what led ichabod to find the headless horseman’s head and give it to him. This was a good trick because after it was proven he had a head it pretty much ruined his whole gimmick and he had to leave.

Now to be frankly honest as someone who is trying to be Positive and concentrate on my Writing rather than keep breaking people’s ribs like on the evening of October 31st on my own property, I actually wish I could be as brainy as this dude ichabod (although with more masculine type clothes). I would like to have his type of knowledge as well as intelligence, however when it comes down to it all the know how in the world isn’t worth jack shit next to the artistic fucking impulse.

Stop figuring things out, formulating, calculating and quantifying what makes sense and what it all means. Shut your mouth, get off your ass and do what comes naturally you jackass. Thats what ichabod would tell you and thats what the headless horseman would tell you, and thats what I’m telling you. And you should trust what us three are saying here because two heads are better than one.

P.S. Two heads are better than one? Holy christ that was a despicable fucking joke, I have been reading too much of that jailhouse jim’s sight (see last week’s column). One more reason why I’m going to cut that motherfuckers balls off.

Casper Van Dien Christina Ricci Christopher Lee Johnny Depp Ray Park Tim Burton
This entry was posted on Monday, November 22nd, 1999 at 7:47 am and is filed under Horror, Mystery, Reviews, Vern Tells It Like It Is. You can follow any responses to this entry through the RSS 2.0 feed. You can skip to the end and leave a response. Pinging is currently not allowed.