VERN Vs. THE BROTHERS GRIMM!! 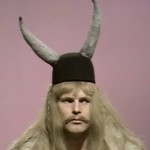 As far as actual entertainment value though it’s maybe a little less miraculous, in my opinion. The main problem: the first hour. A man of my knowledge and insights, I oughta be able to put my finger on it more than that, but all I can say is I was bored as shit for the first half of this movie. Nothing really painfully lame or anything but it’s just not involving and not in the usual Terry Gilliam way where he overwhelms and disorients you with his powerful imagination rays. It looks like a Terry Gilliam movie, it seems like an okay premise for a Terry Gilliam movie, but it just doesn’t click. It’s not funny. It’s not that clever. And takes for fucking ever to get going. 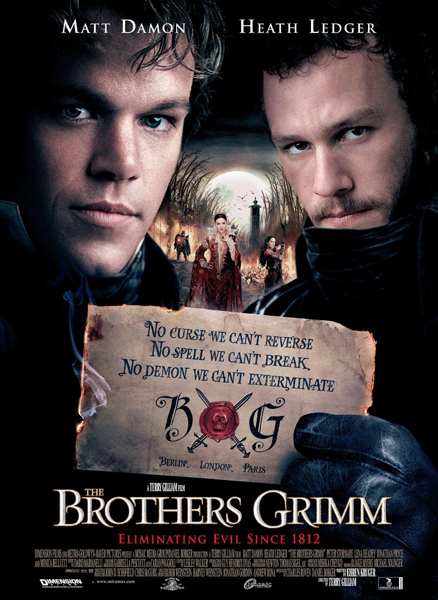 I don’t know for sure what happened but this is my guess. The poor bastard spends all these years doing these weird fantasies about the power of imagination and what not, then suddenly he takes a left turn and makes that great adaptation of FEAR AND LOATHING. It makes sense that he was the guy who could pull that movie off, but at the same time it’s pretty different from castles and hot air balloons and flying around on wings and shit. And all that heat, something in his brain cracked. So now he goes back and tries to do Don Quixote, he can’t do it without disaster: floods and sickness and I forget, did anybody get eaten by locusts in that documentary? He has such a hard time he figures what the hell, after all these years of fierce uncompromising independence, it’s time to take one for the team. He does one for hire, from somebody else’s script (the chump who wrote SCREAM 3) just to get his camera rolling again. But I bet he doesn’t really have his heart in it.

I mean you can tell it’s a Terry Gilliam movie. There are faces in this you would only see in a Terry Gilliam movie or maybe a Disneyland ride. And crazy shit nobody else would put in their movie. But you want the whole movie to be good, not just little spots. I don’t think it has a point of view like his other movies. It’s not trying to say anything. And because you’re not busy being dazzled or nothin, it’s easy to notice that.

I had really given up on the movie, and it was definitely too late to redeem it entirely, but suddenly out of nowhere there’s a crazy fucked up scene involving an evil horse. And if you’ve seen the american remake of THE RING, which was written by the same guy, you will remember that the best scene in there was also a crazy fucked up scene involving an evil horse. So it is easy to conclude that this Ehren Krueger guy is afraid of horses. I am afraid of horses too ever since a month ago or so when I read about the guy dropped off at a hospital in Enumclaw, Washington bleeding to death from his colon. Turned out he had been on a farm with a horse and, you know, I think you can add that one up. I mean I’m guessing the bleeder was the instigator but I still don’t trust any animal that knows how to do that. Ever since then I been avoiding rural areas.

There’s no way Ehren Krueger knew about that one though because this movie has been in the vaults for a while, it’s part of The Great Weinstein Purge of ’05 (dumping off all the shelved Miramax movies before they go off to their new company). So Ehren Krueger if you’re out there, you were right to be suspicious of the horses. Stay away from those beasts. Remember Enumclaw.

Okay so where was I. The scene with the horse. By the way, just to be clear, the horse in this movie does not fuck anybody to death. That kind of thing only happens in real life. This was something else and it was a good scene. A bright spot in a dull landscape. Then about halfway through the movie, when Heath Ledger climbs up into a Rapunzel-type tower, suddenly the movie starts working. This really is the first time in the movie where I started to be interested in what was going on. Suddenly you start to see what’s going on with this curse and an evil queen and there are more concentrated instances of the crazy fantasy shit Mr. Gilliam enjoys. It’s all based on fairy tales of course but they did it better than you might expect. All the events related to fairy tales are different from the stories we know, mixed up and nightmarish. And they never try to point fingers at it or comment on it. “This would make a great fairy tale! I’m writing this shit down!” There’s weird special effects and two really spectacular monsters. There is one scene that looks more like a Jan Svankmajer short than a studio movie. (Yes, I know who Jan Svankmajer is. Some animation guy.) Anyway this crazy scene was probaly worth sitting through the rest of the movie for.

Honestly, if I had walked in at the halfway point, I would’ve thought it was a good movie. I recommend showing up real fuckin late to this one. You will miss all the fandango ads, the invasion of the fantanas and the one where you put a Black Eyed Peas song on your phone so let’s say your friends are stranded on a mountain or something and you’re their only hope of rescue, they will have to listen to a song before you answer and hopefully their battery won’t die. It’s hard to explain but that’s what the ad said, I was supposed to buy a cell phone, then I was supposed to pay to have it play a hot new song to anybody who calls me. If you’re late for the movie you won’t find out how much you need that important new service and also you will not be as bored during this movie.

I guess in a way this is like so many of the fantasy movies of the ’80s and back then. They got no sense of humor, the characters are dull as a butterknife, but every 20 minutes or so there is an awesome stop motion monster or puppet or something. Now that I look at it that way I guess it’s better than DRAGONSLAYER or KRULL or something. Hey, maybe it’s not that bad. But between the scary monster bits, it seems like the movie is supposed to be whimsical. I felt like I was supposed to be having a whole fuck of alot more fun than I was actually having.

This really feels like a miss to me. I wouldn’t think it would be like WEDDING CRASHERS or MRS. DOUBTFIRE or something where I’d say, “Yeah, pretty bad, I’m sure it will be huge.” But on the other hand, the screening I saw it at seemed to go over really well. There was actually alot of applause at the end. So who knows. Maybe it will make money and the Man will let Terry Gilliam make another movie. If not, I think he already finished one called TIDELAND during the time this was in the can. So we’ll get at least one more. Unless it gets shelved, destroyed by a flood, or fucked to death by a horse.

Ehren Kruger Heath Ledger Matt Damon Terry Gilliam
This entry was posted on Friday, August 26th, 2005 at 6:21 am and is filed under AICN, Comedy/Laffs, Fantasy/Swords, Reviews. You can follow any responses to this entry through the RSS 2.0 feed. You can skip to the end and leave a response. Pinging is currently not allowed.