(KILLER ELITE is enjoyable if unspectacular. Luckily it’s more in the vein of the sort-of-classy studio action thrillers like THE BANK JOB than the gloomy Millennium Pictures joints I halfway expected it to be like. So it co-stars Robert DeNiro, the legendary actor, and not Robert DeNiro, that old man from the 50 Cent movies. But the star is definitely Jason Statham, looking exactly the same in 1980-81 as he does in any other time period (minus the track suit).

Statham plays an assassin-formerly-for-hire trying to settle down in Australia (the ol’ “I almost shot a kid and had to get out of the game” routine) when he’s summoned to Dubai so a dying oil sheik (who looks as cartoonish as the Arabs in THE EXTRAORDINARY ADVENTURES OF ADELE BLANC-SEC) can offer to pay him 6 million (American?) dollars to go to London and assassinate the former S.A.S. officers who blew up three of his sons out in the Oman desert years ago. Oh yeah, and I know you’re retired so to show my appreciation I will also release your mentor (DeNiro) who I have as my prisoner. Have fun!

The Stath puts together a team and starts his series of tricks and ambushes of the Brits on his hit list. They have to be clever about it because they have to first get a videotaped confession, then kill them but have it look like an accident. That’s hard enough, but another ex-S.A.S. guy who’s not on the list (Clive Owen) stumbles across their suspicious snooping and starts interfering with their whole plot. So there are some fights, some car chases, some guns. 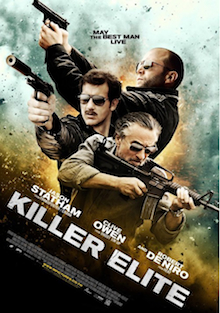 I like how the posters and the DVD/blu-ray cover tell you the most important thing you need to know: these are some guys that wear sunglasses and shoot guns. But they leave off my favorite member of the sunglass-wearing/gun-shooting team: Dominic Purcell, believe it or not, in a role a little better than I’ve seen him in before. He wears a ridiculous mustache and sideburns well and they adapt organically into his disguises as he fakes a couple different nationalities. (Nobody buys his Welsh, though.) He has a really good comedic moment where he’s on a beach with his gut hanging out and fakes an ice cream cone accident to cover letting the air out of a tire.

Owen’s part is interesting because if they edited the scenes in a different order he would be the good guy. Statham and team are introduced first, so we identify with them, but they’re guilty of the exact same kind of murders these S.A.S. guys are being avenged for (“I’m just glad I never did a raghead,” Purcell says – a racist way of admitting that they could easily be the ones on the list). In his circle Owen is the perceptive one who figures out there’s a plot afoot, and that nobody will listen to. He even gets set up to take a fall for them – the whole hero thing. He could be Tom Cruise in MISSION: IMPOSSIBLE. He’s totally the good guy.

He does have a mustache though, that’s the only thing that really makes him evil. He has a glass eye too, but you notice the mustache first.

One detail I like is the tension between Clive and the emerging punk culture in Britain. In one scene he’s in a bar and some punks turn on the juke box while he’s trying to watch a news report about a dead soldier. He yells at them for having no respect. In a funnier scene a crazy old ex-S.A.S. guy beats the shit out of four skinheads for keying his car.

I’m happy to report that this doesn’t have all the dull trappings of modern action. There is some color in it, some sunshine, some variation in locations. Some of the face-to-face fights are a little shaky, but overall the action is pretty old fashioned workmanlike, for better or worse. There are some suspenseful sequences (like when they gotta force two other vehicles into an accident) and some good moves (bread loaf silencer, tied-to-chair-flip, tunnel chase hornet’s nest elbow [done by Ben Mendelsohn, the most evil guy from ANIMAL KINGDOM]).

DeNiro’s a prisoner for most of the movie but does manage to be involved in a couple big shoot outs and later has a scene where he uses his charm to keep Statham’s girl (Yvonne Strahovski) from panicking. Like the movie itself this mentor character is not exactly one of the greats, but is pretty likable. I like how he calls 44 year old Statham “kid” or “kiddo” all the time, and how he decides he has to go back to get his watch during an escape attempt.

This KILLER ELITE has nothing to do with the Sam Peckinpah movie THE KILLER ELITE. It’s adapted from a 1991 book called “The Feather Men” by Ralph and Joseph Fiennes’s third cousin Sir Ranulph Fiennes. That sounds made up, but it’s true. That’s the guy’s name and he really is related to them. The book was promoted as non-fiction even though the words “FACT OR FICTION?” were on the cover and that seems to be sort of a self answering question. You wouldn’t put that on the cover of “Angela’s Ashes.” From summaries of the book it sounds like it’s different from the movie in that the assassinations take place over 17 years, and Clive Owen probly is the good guy. His group are called “The Feather Men” and they save Sir Fiennes from being killed by what would be Statham’s group, “The Clinic.” In the movie I guess his character is one of the ones that gets killed. The text at the end still claims it’s a true story, so maybe out of spite Fiennes now says it was all made up.

Anyway, KILLER ELITE’s not bad. You could do worse. I guess it made sense to put Statham in the remake of THE MECHANIC because he really is putting together a body of work that in a way makes him the closest thing we have to a modern Charles Bronson. Or at least a white Jim Brown. He just needs some more DEATH WISHes under his belt. But he’s got a bunch of THE EVIL THAT MEN DOs.

assassins Ben Mendelsohn Clive Owen Dominic Purcell Jason Statham Robert DeNiro true story
This entry was posted on Tuesday, January 10th, 2012 at 3:53 am and is filed under Action, Reviews, Thriller. You can follow any responses to this entry through the RSS 2.0 feed. You can skip to the end and leave a response. Pinging is currently not allowed.