Happy New Year’s Day Observed everybody. I hope you are able to observe the New Year today.

Everybody seems to be sharing their end of the year favorites list, so I decided to join in, and threw this hodgepodge together. As a rule I don’t do end of the year lists, but I hate all rules so this year I’m doing one. Take that, The System.

This movie didn’t entirely work for me. I think it’s way too long and repetitive. But it’s such an unusual and impressive technical feat (it follows a dead guy’s soul floating around after his death) that the experience really stuck with me. Yeah, I saw plenty of movies that weren’t as heavily flawed, but most of them weren’t as interesting.

DISQUALIFIED FOR BEING RELEASED IN 2010. NICE TRY, CHEATER 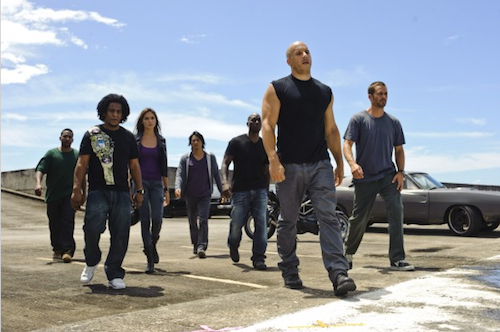 My pick for the most satisfying dumb Hollywood movie this year. Somehow this series continues to get more awesome without sacrificing ridiculous. Great action scenes, gimmicks, cast, and a classic macho-off between Vin Diesel and The Rock. Too bad THE EXPENDABLES wasn’t this fun. 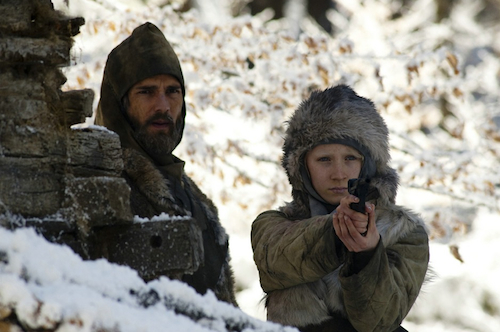 I love a good movie that can pass for a Hollywood thriller but has kind of an arty or classy edge to it. Here the director of ATONEMENT does a great take on the ol’ “kid trained to be a super killer” tale. He gives the girl a good revenge arc and Eric Bana a couple topnotch fight scenes, but my favorite part of the movie is the goofy and sweet friendship between the l’il assassin raised in the wilderness and the little brat raised on reality TV and cell phones. 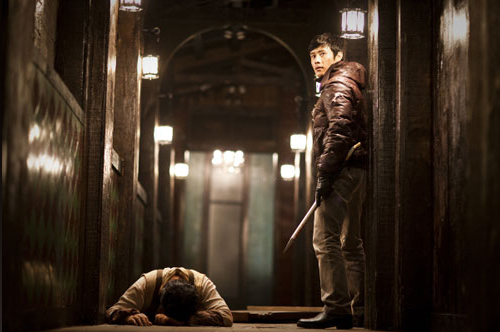 I SAW THE DEVIL

A stylish action-revenge movie gets disemboweled by a fucked up serial killer thriller. It uses filmatism to get me excited for sadistic vengeance and then makes me feel bad about it. In a good way. “Revenge is bad” is a message we’ve seen before but it’s such an engrossing, precise, and at times shocking movie that it almost tricks me into thinking it’s a new idea. 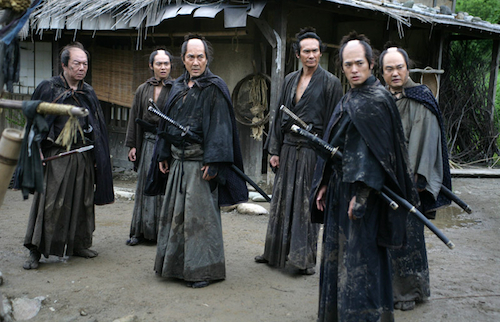 A big group of characters but a simple story. An absolutely great villain and a whole bunch of badass samurais with a smart strategy. Swords, explosions, bonding, honor, all the shit I love. Just pure entertainment.

THE TREE OF LIFE

This seems like the obvious pretentious critic’s choice for movie of the year, but sometimes those fellas know what they’re talking about. This Terrence Malick individual uses cinematic language in a way I’ve never seen before, creating such an authentic movie version of the feeling of remembering one’s childhood that it gave me maybe the most overwhelming emotional response I’ve ever had to a movie. Despite the presence of dinosaurs. I’m not saying I’m gonna throw this one on all the time – studying it too much could demystify it – but man if it isn’t a cinematic achievement. Way to achieve, Malick. 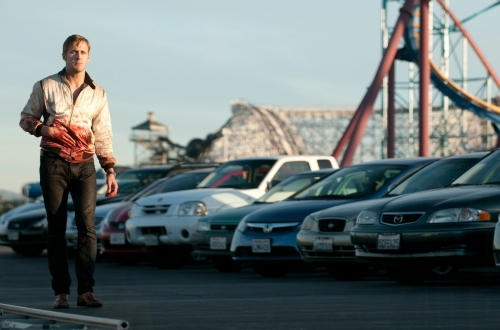 This is another one that’s topping alot of lists, you might be sick of hearing about it. I’m glad it caught on so much (big enough for a backlash!) but I really feel like this is exactly my kind of movie. It’s a crime movie with great tension and action but with a sense of patience and a respect for quiet. And some great characters. Might even get Albert Brooks an Oscar. It’s got style, atmosphere, mood, swagger, weirdness, humor, romance, headbashing, some cars.

losers that can hang their heads high:
KILL THE IRISHMAN, ATTACK THE BLOCK, RISE OF THE PLANET OF THE APES, WARRIOR, THE DESCENDANTS, M:I:4:GP

Michael Jai White, NEVER BACK DOWN 2: THE BEATDOWN

MJW’s directorial debut has some cheesy aspects, but his character is a classic. I watched scenes of this over and over like I was wearing out favorite songs on a pretty good album.

SUCKER PUNCH. I don’t know man, it’s a mess but I still respect the ambition and the technical mastery. Not given enough credit.

DON’T BE AFRAID OF THE DARK. I guess it wasn’t a huge year for the stuff, I didn’t see too many new horror movies in ’11. And of course even this one is a remake. But I think it’s really well executed with interesting character dynamics, solid suspense skills and A+ creature effects. I hope it catches on on video. (I think it comes out this week.)

I wish I could say RANGO, which is easily the best looking cartoon I saw, but unfortunately the movie bored the shit out of me. One thing I don’t get: if it’s supposed to be a tribute to westerns why base it on CHINATOWN? Why not, like, a western type plot? Or at least a samurai one?

And I liked THE ADVENTURES OF TINTIN if that counts as animated, but I gotta tell you, the one I enjoyed most was actually KUNG FU PANDA 2. I thought a part 2 would probly fail without that “not Pixar but good for Dreamworks” surprise factor, but they managed to make a really good sequel. It builds on the first one, starting him off as a heroic warrior (not taking everything away and making him rehash what happened in part 1) and turning the joke about him obviously being adopted into the premise of the movie. The villain is a white peacock who’s visually interesting, a completely different threat than the burly tiger villain in part 1, and who has some emotional vulnerabilities you don’t expect to see. Looked great in 3D, too.

CARS 2. I’m sure some of the other ones involving Gnomes and shit are worse, but this is the first time I thought a Pixar movie was bad. I dug the insane logic and detailed animation of the first CARS and it sounded like a great idea to put them into a spy movie. But the story is just like Saturday cartoon junk with vague, generic allusions to James Bond, phony attempts at emotion and gratingly frenetic action throughout. It’s not just “weak for Pixar,” it’s not good at all.

DRIVE ANGRY 3D I guess. Not his best year.

Most unique use of 3D I saw:

CAVE OF FORGOTTEN DREAMS. So cool it got re-released in a theater here after the DVD already came out.

HARRY POTTER AND THE etc. part 2

There’s some god damn liar in Hollywood going around giving a little seminar to convince the directors that it would be easier just to shoot the movie the way they always have and not learn new things, then have it converted to fake 3D. It always looks like shit, many of them don’t do as well anymore and most moviegoers either can tell the difference and don’t like it or can’t tell the difference and don’t like any 3D. It’s just a terrible idea artistically and business-wise but they keep doing it – for example THE AVENGERS and STAR TREK 2 are gonna be released in fake 3D next year. STAR TREK might be shot partially in Imax, but why would you want to go to a real Imax theater only to have that footage converted into fake 3D?

As the public becomes more aware of this shitty technique they gotta do interviews and talk about how it was always planned in 3D or they had a longer period to convert it than they did on CLASH OF THE TITANS, THOR, THE IMMORTALS, CAPTAIN AMERICA, CONAN THE BARBARIAN and whatever else you saw that looked like shit, or the technology’s getting better or whatever. And still they end up with something like GREEN HORNET, where you barely noticed it’s in 3D until the end credits, or this, where you barely notice it’s in 3D except when parts of it are blurry or dark and it’s hard to see.

I hope this will be the year everybody figures out to stop doing that, but obviously if any of these directors had seen any of these movies in fake 3D they would never have even considered doing it to theirs. So they must not go to many movies and they’re never gonna find out.

comedies that weren’t that great but made me laugh:

BAD TEACHER – I wonder if there’s gonna be a whole “BAD” line of movies some day. BAD LIEUTENANT, BAD SANTA, this. Cameron Diaz being an asshole the whole time is pretty funny. I only regret the undeserved happy ending for her.

30 MINUTES OR LESS – This one the story was pretty dumb but the people in it were funny, mostly in ways that probly didn’t come out of the script. I can’t really do it justice but maybe my favorite scene is Danny McBride showing off that he’s not scared to pretend to buttfuck FRIDAY THE 13TH 3D Jason Voorhees on his dad’s projection TV.

Dumb comedy that made me laugh but everyone I know thinks it’s the worst and unfunniest piece of shit they’ve ever seen:

Another Danny McBride one. Not as good as I was hoping for, but still had me laughing with its story of a CABIN BOY esque priss as the obnoxious hero of a KRULL type ’80s fantasy movie. James Franco maybe made the movie as the handsome brother McBride is jealous of. You’d think he’d be a vain asshole but instead he’s the greatest guy in the world. He’s so kind and heroic that he offers to go on a dangerous rescue mission for the pet lizard (“my animal companion Stephen”) that his dumb brother purposely left behind in the woods. Natalie Portman, having already won her Oscar, does a victory lap in this movie looking super hot and shooting arrows. I didn’t review this because director David Gordon Green wrote the introduction to Seagalogy, and people would probly think I was faking it to be nice. Don’t see it, I guess, but I liked it.

I think this THE HUNGER GAMES PART 1 OF A NEW SAGA won’t be the cultural phenomenon they’re trying so hard to fabricate it into. It will make some money but to mediocre reviews and most adults won’t give a shit by the time the second one comes out. (counter argument: but Steven Soderbergh is the second unit director. The insert shots are gonna be transcendent!)

That’s all I got. More reviews soon

This entry was posted on Monday, January 2nd, 2012 at 1:59 pm and is filed under Blog Post (short for weblog). You can follow any responses to this entry through the RSS 2.0 feed. You can skip to the end and leave a response. Pinging is currently not allowed.