I forgot all about it after Michael Jai White’s NEVER BACK DOWN 2, but the star of part 1, Sean Faris, looks and acts an awful lot like Tom Cruise. But FREERUNNER is pretty low-rent for Tom Cruise even when he was younger. It’s not good, but it’s not the usual type of churned-out-dispassionately bad DTV, it’s more of a scrappy independent we-gotta-get-this-shot-somehow production. It’s artisan crap.

The Channing Tatum one sounds like it was gonna be a POINT BREAK or THE FAST AND THE FURIOUS knockoff but with the bank robbers doing parkour. This one is more of a BATTLE ROYALE/THE CONDEMNED/DEATH RACE type of formula. Whatsisdick plays a guy who competes in an illegal parkour race organized by a dangerous British dude (he says “wanker” alot) and backed by online betting. He has a hot club singer girlfriend, a hacker friend and a dream to move somewhere on the ocean. So he comes up with a plan to secretly bet all his money on himself (for some reason that’s not allowed) and then he would just have to win the race. What a scam. Then he would take the money and run (and climb walls and jump off stuff I guess). So it’s kind of a weird idea for a parkoursploitation movie – it’s all about dreaming of getting out. They never did that with breakdancing. One last headspin, and then I’m retired for good. I guess somebody needs to do the breakdancing-to-the-death movie. I’d watch that. 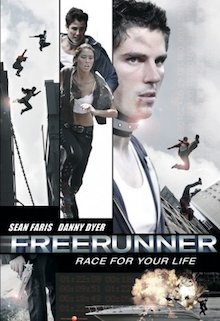 About 35 minutes in the plot switches up. Since the movie is sloppy it doesn’t come off like a narrative trick, it just seems like they got sick of the first premise and decided to start a new one. Now the racers get abducted mid-race and a different bad guy forces them to compete in a different illegal race where they have to wear explosive collars like BATTLE ROYALE. The first place winner gets a cash prize, everybody else gets blowed up. All the action is hosted by a blond Access Hollywood type hostess. It’s funny that these evil rich people could find some model-turned-TV-presenter who’s willing to joke around about people’s deaths. Then she exposes her tits, so they must’ve just hired a porn star I guess.

The movie seems weirdly out of touch. The hacker/girlfriend’s-stepbrother character hangs out at a place always referred to as “the cybercafe.” They use the term 3 times in one scene. He comes close to blowing the original plan before the plot changed because he almost forgets to click “send” after filling out his bet. There’s a painfully unfunny scene based on the cliche of the old cashier at the drugstore who calls for a price check when you’re buying condoms. At the end the secret to victory over evil is that he says “Love bites, doesn’t it?” and his girlfriend knows it’s a signal to bite the bad guy.

The parkour scenes are unimpressive. Sure, they jump across alot of roofs, they do gratuitous flips. But it’s all very repetitive and without much art or spectacle to it. There’s none of the thrill of the chases in DISTRICT B13 or the YAMAKASI or the opening of CASINO ROYALE. And in the first big race the filmatists make the knuckleheaded decision of slathering the scenes with sloppy handheld cameras and stupid graphics. I guess the idea is to make it look like the home videos parkour guys would make for Youtube and shit. Okay, then put it on Youtube, don’t make me pay to rent the DVD.

I did think it was funny that when he comandeered a motorcycle he had to do a flip onto the bike. I mean come on man, are we really supposed to believe that was the easiest way to get on that thing? Then he does a wheelie too. He’s just a fuckin showoff. He’s not really parkour because the point of parkour is to be efficient, to get from point A to point B in the quickest way. No slowing down to do wheelies. But by some definitions freerunning is different from parkour and is more about creativity than efficiency. So yes, he is a freerunner and freemotorcycler.

DTV parkour Sean Faris
This entry was posted on Tuesday, January 3rd, 2012 at 2:04 am and is filed under Action, Reviews. You can follow any responses to this entry through the RSS 2.0 feed. You can skip to the end and leave a response. Pinging is currently not allowed.