I thought BLACK SANTA’S REVENGE was gonna be a real (but super low budget I’m sure) movie. Turns out it’s a 20 minute short (“mini epic” the credits say) shot by some dudes in Portland, Oregon. The writer/director David Walker is the guy that started the zine-turned-websight BadAzz MoFo, which I’m sure some of you are familiar with because of their coverage of blaxploitation and spaghetti westerns. 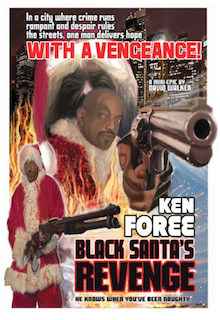 The titular Santa who gets the also titular revenge is played by an actor I really like, Ken Foree. Of course I always knew him as Peter from DAWN OF THE DEAD. Through the ’80s he mainly did TV guest star gigs on Knight Rider and Scarecrow and Mrs. King and shit like that, with only the occasional movie appearance like JOJO DANCER YOUR LIFE IS CALLING or FROM BEYOND to fulfill any of his potential. I was real excited when I recognized him in LEATHERFACE: THE TEXAS CHAINSAW MASSACRE III (his Good Samaritan survivalist character is an enjoyable part of a not-great movie) and like alot of horror fans I always wished he would show up more.

That seemed to sort of happen after 2005 when he played the Lando Calrissian type character in THE DEVIL’S REJECTS that welcomes Captain Spaulding to the safety of his brothel. Now he’s one of the Rob Zombie players, showing up in all the Zombie pictures, and like Sid Haig that means he also gets a bunch of side-work in movies so low-rent even I wouldn’t think about watching them. I could be wrong, so please let me know if you know of a good one, but I got no faith in most of ’em. I made the mistake of trying to watch that NIGHT OF THE LIVING DEAD 3D with Haig and it made the DAY OF THE DEAD remake seem pretty good by comparison.

Anyway BLACK SANTA’S REVENGE is pretty much what the title says it is. It’s a violent revenge tale about a guy who dresses as Santa for poor kids at a community center that takes toy donations that they’re actually gonna give to the kids that asked for them. Then some assholes steal all the toys at gunpoint and say they hate Christmas.

Now Santa has a headwound and he’s depressed as shit, fantasizing about a kid calling him “nothin but a punk ass beeyitch” for not following through with the presents, having a drink at a titty bar. Suddenly he notices one of the toy-thieves, follows him to a warehouse and murders everybody involved in the toy-donation-thieving ring. There is a little bit of Santa-themed dialogue, for example he yells “Ho ho ho, you naughty motherfuckers!” as he opens his attack, and a thug bangs his head against the ground while grunting “Milk drinkin… cookie eatin… mother… fucker!”

There are little references that you’d expect from Badazz Mofo – a Jim Kelly line from ENTER THE DRAGON, a Dolemite phrase (“rat soup eating motherfucker” of course), a song listed on the credits as “Sounds Like John Carpenter Theme.” But thankfully it treats it more seriously than as a joke, despite the obvious absurdity. I do think it would work alot better if it made a little more sense – like, what charity has a Santa that promises specific toys to kids planning to really give it to them from donations? And how are we supposed to believe that some guy is gonna get money from selling shitty used teddy bears? He’d have trouble moving them at a garage sale.

I guess I don’t believe it, but if it was gonna be phony anyway it could’ve had some ridiculous explanation, like somebody accidentally donated a doll full of a superdrug or something, I don’t know.

Also, why is he Black Santa? Is it because white Santas don’t volunteer at the community center, even though most of the kids there are white? It doesn’t seem to make a difference in the story at all. Does anybody ever give him shit about not fitting the common image of whitey Santa? They don’t really deal with it. I guess I like my blaxploitation to have some kind of racial conflict, like the racist white sheriff who loses his wife to Dolemite, or Mamuwalde refusing to deal with Dracula because he’s a slave trader. But I guess that wouldn’t be in the spirit of Christmas to have that kind of divisiveness in here. Instead Walker chooses to honor the spirit of the holiday by emphasizing the importance of charity, and by delivering savage vengeance upon those who fuck with charity.

I can’t really say you need to seek this out. It seems like probly exactly what it is – some film fans who decided to have fun trying to make one. They probly regret a few things and they probly learned things they would use if they tried again. I would be happy to regret a couple of bad green screen shots on their behalf (like the shot where a door opens onto what appears to be a stretched jpeg of some toys).

It’s not great. But I like that it’s not as smart-assed as I expected. It’s not really Troma-esque in tone. It even ends on a sentimental note. Best of all, Foree treats it as a dramatic role and not acting like he’s trying to be funny. And he doesn’t get that many leads so it’s nice to see even a 20 minute short that centers on him. I’d watch a feature version if they made one.

blaxploitation Christmas Christmas crime Ken Foree revenge shorts
This entry was posted on Tuesday, December 20th, 2011 at 2:30 am and is filed under Action, Reviews. You can follow any responses to this entry through the RSS 2.0 feed. You can skip to the end and leave a response. Pinging is currently not allowed.