Frontier(s) is kind of a 2000s French take on THE TEXAS CHAIN SAW MASSACRE. It takes place when an extreme right winger has been elected President, sparking riots across the Paris suburbs (which is English for French for “the hood”). Our protagonists are 5 kids who tried to take advantage of the chaos to do a robbery, but one of them got shot. They split up, and two of them take the wounded guy to the hospital while the other two head out to the booney(s) to hide out. Those two get to a small inn and try to get the two girls at the desk to, you know, enjoy the room with them. And things get ugly pretty quick after that.

There’s definitely some HOSTEL in here too, what with it being a hostel, and some horny dudes trying to get laid, and hot scary ladies luring them in to be dragged to a filthy warehouse type place where they’ll be worked over by various sizes of sweaty maniacs in aprons and rubber gloves. But I say it’s more TEXAS CHAIN SAW in substance because they’re a family of cannibals and it has that same idea of an ancient asshole (Jean-Pierre Jorris) still alive and forcing his backwards ways on the next generation. In this case he’s not zombie-like Grandpa, he’s still lucid and very much in charge, and he’s an escaped Nazi war criminal who now kidnaps girls as “wives” for the young butchers he calls his sons, trying to keep his “pure race” going. 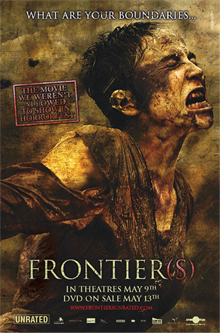 Like TEXAS CHAIN SAW (original but not remake) there’s a forced family dinner. The family dynamic is interesting because these characters who have been terrorizing the kids get scared when their “father” comes in the room. The ladies from the front desk violently stoke the fire so it looks like they’re working (or maybe so the room is at just the temperature he likes it), another helpfully tells their kidnap victim Yasmine (Karina Testa) to sit up straight, because he hates it when they slump.

Father announces that he’s decided to pass on leadership of the family to “the only son I’m proud of,” then complaints about how much the other sons suck, and they have to just sit there and take it. It’s very true to life, the subserviance and even loyalty to a horribly abusive asshole. They’re terrified of him but if they make him happy it will be a big accomplishment, so they keep trying desperately. It’s true, you get attached to these people that aren’t really good to you, and you do things you shouldn’t. Farid let his dumb friend drag him into cheating on his girlfriend, these guys let their Nazi father figure drag them into kidnapping, murdering and cannibalism.

The action is shot too chaotic, but it’s mostly readable. The most effective sequence to me involves two of them trying to escape by crawling through some kind of pipe or sewer that they barely fit through. The guy in front is having trouble moving on, and the idea of getting trapped behind him is real upsetting, I think. I’m against it.

The scariest character is definitely the father, not so much physically as psychologically. There’s something about his petty cruelty to his kids that makes him not just horror-villain-scary but really ring true as the type of toxic person you would hate to be around in real life even if they weren’t a Nazi, a cannibal or a kidnapper.

I also thought Gilberte (Estelle Lefébure) was interesting, she’s very good looking but looks more mature and physically capable than your standard Hollywood good looking woman. So she’s intimidating to these kids even when they’re just trying to fuck her and don’t know she’s trying to kill them.

But then there’s Eva (Maud Forget). She looks like a young, hunchback Helena Bonham Carter. She seems like the most conflicted member of the family (like Ruby in THE HILLS HAVE EYES), so she follows the rules but secretly tries to console Yasmine and tell her she’s pretty and stuff. Unfortunately her solution to forced pregnancy is to soothe herself by drinking jugs of very potent moonshine. And this may have had results you’d expect, based on what she says about her kids.

Yasmine is the Final Girl, something that’s missing in some of these modern horrors. I don’t know why but it never feels as satisfying to see some dude running away at the end. Call me old fashioned. (usually when you say “call me old fashioned” it’s sarcastic, but in this instance I am sincerely asking you to call me old fashioned.) It’s important to note that she’s pregnant. And she’s not just protecting her baby’s life, she’s protecting it from being given to this family, to become one of them. Just as the rioters don’t want the extreme right wing president to change France, she doesn’t want this way, way more extreme right wing guy to turn her child into one of his family. So it’s TEXAS CHAIN SAW but there’s more at stake, at least symbolically: their lives, but also the country, and the next generation.

And here is this asshole keeping alive the shitty old ways. The men fight each other for power, the women use their sexuality and housekeeping skills to serve him. I guess Gilberte does rank higher than some of the men in the family, that’s fair, and somewhat progressive. But Klaudia (Amélie Dore) and Eva don’t get shit. Eva, the only one who sees what a shitty way of life it is, sees no way out and just tries to medicate her way through it.

I also like that the movie poses a conflict between (sub)urban dwellers and rural types. Back at home the powers that be see kids like this as the troublemakers. And admittedly they did that robbery, that was bad. But shit, have you seen what they’re doing out in the frontier(s)? Cut these LA HAINE type kids some slack, at least they don’t have a meat locker full of people. They’re good kids.

There are plenty of other TEXAS CHAIN SAW parallels besides the ones I mentioned, and it ends up with an excellent remix of the classic hysterical-blood-covered-survivor-stumbles-back-into-civilization bit. She looks like she’s just been put through the ringer and then put back through the ringer and then shook off and then run through a couple more times just to be sure. The cops stop her and they might be there to arrest her for involvement in the robbery but when they see her who knows what they’re thinking? I mean, shit.

I would say FRONTIER(S) is quite good(ish). It’s fairly derivative and I prefer the classic style of the movies that it’s derived from. But it also pulled me by the hair through a pretty good thrill ride, and I feel that it respects the classics by investing their tropes with modern relevance. It’s definitely better than I would expect from director Xavier Gens based on that movie HITMAN where Timothy Olyphant played a religious hitman who probly regretted having to shave his head, because it didn’t suit him. But reportedly that was taken away from him for being too violent and they re-edited it and did reshoots without him. If those reshoots were all the parts that showed Olyphant’s head then that might exonerate M. Gens.

I don’t think all horror movies have to be “about” something, but it’s nice when they are, and kinda rare these days. Some people might mistake it for a “man, check out how fucked up this is” movie, but it’s got more to it. It works on two level(s).

cannibals French horror Xavier Gens
This entry was posted on Thursday, October 6th, 2011 at 1:53 am and is filed under Horror, Reviews. You can follow any responses to this entry through the RSS 2.0 feed. You can skip to the end and leave a response. Pinging is currently not allowed.