I almost said there might be a giant pig out there, to avoid spoilers, but that would be a disappointing movie if they set up the possibility of a giant pig and then didn’t follow through, wouldn’t it? So don’t worry, there’s a pig. But it’s not a straight monster movie, there’s more threats involved and they’re both human and regular-sized.
Tension comes right away with an encounter at the gas station. A dude and a bunch of girls in weird robes. Our protagonists keep calling them hippies, but I don’t think these are the type of hippies you normally see in the Bay area, are they? They all carry swords (actually, ritualistic blades like the killer used in NIGHT SCHOOL) and they disagree with John’s decision to shoot a rattlesnake with his crossbow. They love animals. They don’t seem vegan, though. I bet there is one type of meat they’re okay with. Not sure. 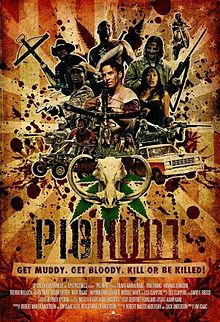 Next are the rednecks that live near the property and stand around spitting tobacco and looking scary in front of a giant American flag. They knew John growing up and a couple of them annoy their way into the hunting party. They’re kind of the redneck stereotype made fun of in TUCKER AND DALE: bitter, dirty white trash dudes who are always hostile and make people feel uncomfortable and unwelcome (but on purpose in this case).

But I think this is also an example of a more modern redneck stereotype that comes out of some of the rock ‘n roll of the ’90s, where they’re supposed to be slimy and scary but also they’re kind of supposed to be cool. A sort of fetishized mishmash of lower class southerner stereotypes and biker culture, like Rob Zombie or the guy from Ministry try to dress up as. One of them is played by Les Claypool from the band Primus – he also did some of the score (which is pretty good at times, his weird basslines sort of sound like a mutant rock ‘n roll JAWS).

I don’t really get that whole movement but in this case I’m okay with it because it means there is a bunch of four-wheeler driving and some motorcycle stunts. Rednecks and standard necks obviously can’t work side-by-side peacefully for that long, so there is some killing and all the yahoos start driving around whooping and hollering and going off of jumps and looking for them. So it becomes a battle between the hunters, the four-wheelers and the hippie cultists. And at some point the giant pig will show up.

It’s hardly an effects extravaganza, but when they’re there they’re pretty good. Instead of SyFy type cgi they build up the pig mostly with POV shots and then have sort of a puppet/costume thing at the end. There also some very realistic gore effects on a smaller pig that they fight and cut open.

The movie tries to reach for a little more with some political themes. The girlfriend is an artist, so the opening credits are over some Iraq War paintings, kids welcoming American soldiers with candy like a Cheney and the Rumsfeld fantasy world. Before they leave there’s some really noticeable street art in the background showing the notorious hooded figure from the Abu Ghraib photos. Some of the hunters are veterans (but non-combat) and some are fascinated by war stories, they think combat is awesome. Of course, it’s the lower class people that actually see combat, so one of the rednecks turns out to be a veteran. But he’s totally crazy, not exactly a sympathetic portrayal of a troubled soldier.

At the end it even gets heavy-handed enough to take a quote from Animal Farm about humans and pigs being indistinguishable from each other. I don’t know about that, man. Nice try but I don’t think you quite earned that one. I like that they’re including current issues in here, but whatever they’re saying is kind of muddled. (Get it? Mud. Pigs like mud.)

The director is James Isaac, one-time Cronenberg effects guy who also directed THE HORROR SHOW and JASON X. To me this one seems a little more indie than those, like a bunch of Bay Area people hired a Canadian director and went out to some woods together to have a fun time making a giant pig movie. So they kind of throw in a bunch of stuff about war and drugs and cults and not all of it works out exactly but they take advantage of whatever talents their friends have and it’s fairly entertaining to watch.

giant pig Iraq War subtext James Isaac rednecks
This entry was posted on Monday, October 31st, 2011 at 1:02 am and is filed under Horror, Reviews. You can follow any responses to this entry through the RSS 2.0 feed. You can skip to the end and leave a response. Pinging is currently not allowed.