Red Sonja (Brigitte Nielsen) is a warrior gal with red hair. Like all fantasy heroes her village was burned down and her parents were killed and she has to go on a journey where she will eventually save the world from the bitch that did it and throw her into some lava. Because she was a girl she also got raped (so we hear, luckily this is not a I SPIT ON YOUR GRAVE type approach) and that adds an extra dimension to the revenge.

So some ghostly spirit lady appears to her and tells her she’ll give her powers so she can get revenge. The only catch is she has to vow not to be “had” by any man that doesn’t defeat her in battle first. That’s kind of some fucked up magic small print, isn’t it? She got raped so she has to keep getting raped, basically? I’m against it.

Anyway, you quickly forget about the magic powers, it just seems like she’s tall and good at swords. She lives in Conan the Barbarian’s Hyborian age, but you won’t hear many lamentations from this woman. She’s introduced sparring with some Asian swordmaster and kicking his ass. I don’t see why this can’t be training and not magic, but oh well. Meanwhile over in a monastery somewhere a bunch of priestesses in white robes are about to ritualistically destroy a talisman that could be used to conquer the world. But some soldiers throw a dagger at the priestess, come in and steal the talisman. Fuck! 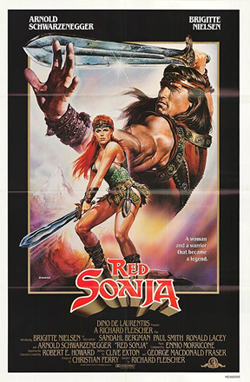 Not surprisingly the evil queen behind this whole plot is the same one that burned down Sonja’s village. Her name is Queen Gedren and she’s played by Sandahl Bergman, who also played Valeria in CONAN THE BARBARIAN (which won her a Golden Globe for “New Star of the Year – Actress”). She apparently was offered the part of Red Sonja but turned it down to play Gedren. Having something like that she could hold over Brigitte Nielsen all the time probly helped her to be evil.

Gedren wears dumb looking leather straps on her face. She tells one of her men to touch the talisman, but when he does he disappears. Warps to another dimension or ceases to exist or who knows. So she tells one of her women to touch it. And she’s like “Uh– b-but, I mean…” She’s like Chris Tucker not wanting to get into that trunk in JACKIE BROWN: she doesn’t want to do it, but she does it. Luckily she doesn’t disappear – it turns out that only women can touch it.

You see? That’s the genius of RED SONJA. She’s apparently in the same world as Conan the Barbarian but she’s on a quest that he could never do, because she can touch the talisman and he can’t. Fuck you, Conan.

The dying priestess zip-lines away just in time to meet Arnold Schwarzenegger on a horse and tell him to go get her sister, which is Red Sonja. So Sonja finds out she’s gotta go on a quest to find this bitch and destroy her talisman.

Unfortunately it’s not all that exciting of a quest, and not much happens. She comes across a town that’s already been destroyed by the queen and her talisman. The only survivors are an obnoxious prince named Tarn (Ernie Reyes, Jr.) and his servant Falkon, who kept reminding me of that guy Horatio Sanz who used to be on Saturday Night Live. If you’re not familiar with Reyes, he was a kid who was an accomplished martial artist, who must’ve been about 12 or 13 when he did this and his first movie, THE LAST DRAGON. As an adult he was one of the fighters in THE RUNDOWN and was the native who attacked them in the cemetery in KINGDOM OF THE CRYSTAL SKULL, but I mainly think of him from this TV show he had in the ’80s called Sidekicks. Gil Gerard was a cop who had to take care of Ernie, he was the heir to some kind of martial arts legacy so people would attack him and he would do tae kwon do or whatever.

In this one he’s an entitled little shit-stain who’s constantly yelling at his servant and calling him an imbecile, or he’s complaining about “ruffians.” He’s a funny little kid and he gets really into the role but it’s also pretty grating. Even after he’s softened up, they’ve helped save the day and Falkon has risked his own life to save him, the fucking kid calls him “clown.” On the positive side, he swings a sword around alot and seems better at it than any of the adults in the movie.

Nielsen was a young model at the time, she got the part shortly before filming after being spotted on the cover of a magazine. Her performance is stiff, but I kind of like her in it. She doesn’t seem crazy like she does now. 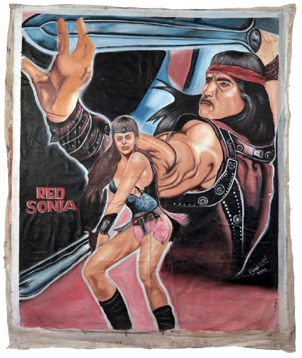 I always knew about this movie and how Schwarzenegger got top billing but wasn’t really the lead. I thought he had a cameo as Conan. He’s actually a pretty big supporting character, he follows her around and keeps showing up to help her, makes fun of the logic of her vow not to sleep with a dude who doesn’t defeat her first, then tries to defeat her so she’ll fuck him, then sticks around for the finale. He’s dressed fancier than Conan but still, this is the same Robert E. Howard world as Conan, right? So I was surprised when he said his name was Kalidor. I even wondered if he was using an alias and would later reveal that he was Conan, but it never happened.

Apparently Red Sonja isn’t exactly a Robert E. Howard Conan character anyway. Howard had a supporting character named Red Sonya, but she was in a non-fantasy story that took place during a time when there were guns. Many years later the name was re-spelled to use for this character in the Conan comic books.

I can’t claim this is a good movie but I don’t regret finally watching it.

Brigitte Nielsen Ernie Reyes Jr. Marvel Comics Richard Fleischer Robert E. Howard
This entry was posted on Sunday, September 11th, 2011 at 7:32 pm and is filed under Fantasy/Swords, Reviews. You can follow any responses to this entry through the RSS 2.0 feed. You can skip to the end and leave a response. Pinging is currently not allowed.