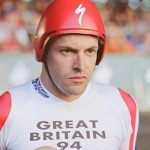 The movie is called THE ESCAPIST, but it’s not a remake of THE ESCAPIST from 1983 which stars actual escape artist Bill Shirk as himself. You would think you couldn’t go wrong with a movie where they do nothing but find excuses to hang the main character upside down in a straight jacket and put snakes on him and crap, but it doesn’t really work out.

In this THE ESCAPIST the guy is not an escape artist trying to promote a radio station, he is some kind of pilot with a death wish getting revenge, like in the movie DEATH WISH, only he’s a pilot. The pilot in question is Jonny Lee Miller (some guy from HACKERS and TRAINSPOTTING) and the recipient of the revenge is Andy Serkis (he is the guy who plays Gollum, if there’s any LORD OF THE RINGS fans out there you will recognize him I bet).

See Jonny is happily married with a pregnant wife, and in a movie like this that’s askin for it. So some weirdo (Gollum) breaks into the house, one thing leads to another and the wife gets killed (spoiler). But the baby survives (spoiler 2). But Gollum just laughs when he’s caught and sentenced to 20 years and this rubs Jonny the wrong way for some reason. So he ignores the baby, tells his sister-in-law to keep it and embarks on a journey. A journey not unlike the one in LORD OF THE RINGS, except instead of going with Gollum to throw a ring in a magic volcano, he has to go TO Gollum to try to shank him in prison. And there’s no giant eagle. I think there’s a talking tree though. No, I take that back, there’s not a talking tree. I guess actually it IS a journey unlike the one in LORD OF THE RINGS.

By the way this movie has a connection to LORD OF THE RINGS, that’s your cue to bring up STAR WARS again in the talkbacks. You know, “George Lucas WISHES he could make a movie like LORD OF THE RINGS, blah blah blah ewoks shot first, etc.” There is a very clear line from point A to point B there, but I guess I don’t have to map it out for you, you freakos obviously know what you’re doing when it comes to still bringing up STAR WARS.

Anyway we’ve seen people go to prison on purpose in other things (the tv show PRISON BREAK and of course HALF PAST DEAD) but this is still a pretty unique revenge concept. He’s determined to get into this Alcatraz type high security prison but he’s new to this crime shit. What he does is first fake his death (always good) then sledge hammer a police car (way to go bud). This gets him into jail. Then he starts beating up prison guards and causing a ruckus, which gets him into prison. But not the right prison. So then he attempts a series of escapes hoping this will get him transferred.

They could maybe get more elaborate with the escapes but it’s still a fun section of the movie, because he gets to try out all these different techniques but with the advantage of not giving a shit if he gets caught. Most people they gotta get it right the first time otherwise they’re fucked. This guy gets the rare opportunity to experiment, find out what he’s good at, dabble in different areas of escape. If he makes it he’ll probaly just turn around and come back and try a different way. Good practice in case he needs to actually escape later, or in case he wants to do a promotion for a radio station where he’s hanging upside down in a straight jacket and they throw snakes on him.

Of course he eventually gets where he wants to and then there’s a little twist and some complications are added to add extra tension. The baby may or may not end up being endangered, it is hard to say. It’s always possible that the baby is an extraneous detail that will not become a plot point in the movie later. Who knows.

Actually the sister-in-law character does bring an extra emotional angle to the picture. She makes you feel a little guilty about enjoying the revenge because it seems to upset her. Andy Serkis makes a pretty good villain, believably evil and not too over the top like you might expect a guy who plays gollums and apes to be. (This was apparently his last pre-LORD OF THE RINGS movie.) It’s well put together but the attraction here is not the actors, or the direction, or even really the script per se. It’s the story, the basic concept. To me there’s something pure and beautiful about a simple concept like this. Guy will stop at nothing to get his money back. Guy will stop at nothing to kill other guy. Not too many subplots or side characters. A movie that just stares straight ahead and keeps walking.

But one thing that helps to fill out a simple movie like this is a bad motherfucker. Jonny Lee Miller does a good job, but if there’s one thing my Badass Cinema studies have taught me its what a strong Badass presence can add to a movie like this. Jonny looks like a regular guy which I’m sure is why they cast him, but almost all of the screen time is devoted to a single-minded quest to kill a motherfucker. And single-minded quests to kill a motherfucker always benefit from a Badass presence. I kept wondering what this would’ve been like if it was Thomas Jane (not because of PUNISHER, even though I kind of liked that one, but because of STANDER). Or maybe Eric Bana (I never seen TROY but I will never forget CHOPPER). Somebody tougher.

But then of course all the boat-riding out to an island prison reminded me of POINT BLANK and Lee Marvin. As it is this is a pretty good movie, but if the exact same thing had been made back in the day with Lee Marvin or Charles Bronson, it might be a classic.

I guess we’ll never know, not unless time travel is invented, and even then only if the owners of the time machine have a weird sense of priorities for what to travel back in time and change. Still, this is a worthwhile low key revenge thriller and I’m surprised it’s been sitting on a shelf for four years. I’m glad somebody accidentally knocked it off when they were reaching for something else on the shelf and then maybe tripped over it or something and then said “hey what’s this?” and mistook it for an Action-Packed Brand-new Feature Film.

Andy Serkis Jonny Lee Miller
This entry was posted on Monday, November 21st, 2005 at 8:06 am and is filed under AICN, Reviews, Thriller. You can follow any responses to this entry through the RSS 2.0 feed. You can skip to the end and leave a response. Pinging is currently not allowed.

One Response to “Vern tracks down Gollum & King Kong in THE ESCAPIST!!!”