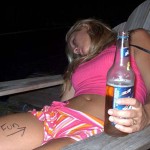 Well somebody loaned me a RUN RONNIE RUN screener and it happens to have THE REAL CANCUN on the same disc. Not sure what happened there but somehow accidentally I dropped the disc into the player and pressed a combination of buttons that caused it to play the movie and then also I watched the whole thing. It was weird.

What the movie is: the producers of The Real World tv show cast a bunch of rich kid morons in their early 20s and then paid them to go drink jagermeister and high five each other in front of cameras. I thought it was funny that they called this a “reality movie” since they apparently are going for an audience that does not know that there is such a thing as documentaries. But after seeing it I realize that it’s actually better not to call this a documentary. A documentary you find real people who are already doing something (pimping, selling bibles, living in subway tunnels, living in a house infested by raccoons, etc.) and you attempt to follow them with minimal interference in their actual life. This is the opposite where you find people and make them go do something. For example I do not believe that these kids, if they had gone to Cancun on their own, would’ve paid money to go bungie jumping and have a dolphin encounter and that type of crap. That was for hollywood. The only major difference from The Real World is that they don’t make them have a job and they use cameras that look more like film. 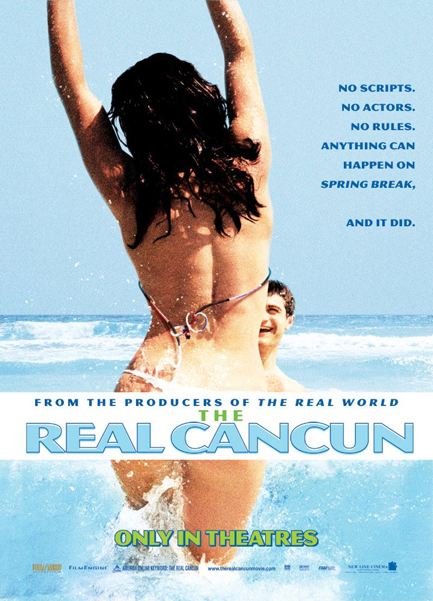 I wouldn’t really recommend this movie but not because I’m embarassed or appalled, just because it’s not all that exciting. If you’re just watching it for titties and what not I definitely would recommend many fine pornographical works over this. But it does have some interest as a horrifying cultural artifact. Not of authentic american culture as far as I can tell but of that bizarre virtual culture that only exists in the matrix of cable television.

Let me put it this way. If it weren’t for MTV and the teen movies of the 1980s I don’t think I would know that you’re supposed to go to an exotic beach somewhere on spring break to try to get drunk and laid. Of course I’ve seen this a million times on tv but I can’t think of anyone I know who has actually done this before or even considered doing it. Maybe it’s a regional thing, I don’t know. But that seems like something you have to be especially rich and stupid to do. When I was that age and younger everybody knew how to get ahold of cheap wine and if they didn’t have a car to fuck in there was always such a thing as the bushes. Maybe if we wanted to get REAL fancy we would save up for a shitty hotel room for a night. Nobody ever dreamed of flying to another country AND being able to afford a hotel.

Harry Knowles of The Ain’t It Cool News made some good points about this picture and that “the real cancun” is something you have to work for. You don’t get free travel and hotel and unlimited drinks and bungie jumps and dolphins and assigned roommates. I mean maybe some of these kids would (there is one guy who talks about how he doesn’t go to college because his mom supports him in doing what he wants to do with his life, which is shopping) but even then they would have to produce cash or credit cards sometimes and worry about if they were going to overdraw for the day and get shut off by the bank. Not these kids.

Also to my surprise that nutball from tv Richard Roeper made an interesting point that apparently this was taped at the same time the US was invading Iraq. So while these little fucks were watching wet t-shirt contests and drinking liquor out of girl’s bellybuttons their peers were off being freedom fried by depleted uranium and dropping bomblets on innocent people. Now it’s a couple months later, the Cancun kids are back home sad that they have to work for a living and waiting nervously for the release of the dvd. And some of those peers of theirs are still in Iraq, guarding nuclear waste, getting picked off in the night one at a time, wondering why the fuck they can’t go home yet and getting more and more impatient with the growing chaos and anger around them.

The reason why this is interesting is because there is no mention of the war or the outside world in the movie. That in itself could’ve been an interesting subject for a documentary if there had been at some point a tv on showing coverage of the invasion. Would the kids be interested? Would it interfere with their enjoyment of watching girls shaking their asses? Or would it not bother them? Since it’s not mentioned we have no idea whether the kids even know what’s going on or whether the filmatists purposely erased the deaths of thousands from their titties and jagermeister epic, but I guess either one is pretty emblematic of something or other.

It’s hard to be specific about the movie because, in the tradition of ALIEN 3, I can’t tell any of these people apart. It tells their names at the beginning, but how the fuck you expect me to remember that. You don’t get much about their personalities, their backgrounds or their hobbies. I know one guy plays guitar and sings wacky songs. There is a girl who says she has a boyfriend back home. That’s about it.

There are attempts to discuss many issues. For example, should you be faithful to your boyfriend? What size of dick do you like? Should you wear your bandana on your head or on your wrist? They also use the term “hook up” alot.

The closest thing to a main storyline involves the evolution of one kid, who knows what his name is so I’ll call him Timmy. Timmy is the outsider to the Spring Break world, like us. Because he is from the Real Generation he is a postmodernist, and keeps referring to himself as “the good kid.” He is very self-conscious of his role as the one guy who doesn’t have giant muscles and a bandana. When he tells the other kids that he doesn’t drink, they look at him like he just told them he masturbates to pictures of spiders. Completely bewildered. While trying to process this they don’t say “Not even a beer?” or “Not even a wine cooler?” but “Not even one shot?” Because it’s all about shots to them.

Of course, they immediately have bets about who can get him to drink a shot, and when they humiliate him into it, liquor suddenly becomes spinach to his Popeye. Or liquor to his Drunken Master. Literally seconds after he puts the shot glass down he announces that he needs titty. Suddenly he is more confident and has lots of fun. Women let him lick their cleavage and suck shots off their bellybuttons. When he didn’t drink he got stood up and more than once punctuated a conversation with the awkward pronouncement “I want to see some booty!” Now that he’s binging he’s turning women down. He falls in love with a cute french girl and even wins “the hot bod contest” despite his skinny frame.

(To be fair, it kind of seemed like he won the contest in the same sense that Carrie won prom queen. So there should be an asterisk next to that. Also, when you see how sad Timmy is to leave it’s hard to not imagine a painful return to the actual real world now that he knows the excitement of hard drinking. Welcome to the club, kid.)

There’s another story about a blonde gal who bungie jumps into the water and gets stung by a tourist-hating jellyfish. This was a great move on the part of the subversive jellyfish because according to the local doctor the only cure is for the girl to pee on her own leg. But she doesn’t have to pee so in the most romantic moment of the picture, one of the bandana guys sees his big opening, he pees in a cup and pours it on her leg.

Well of course they become close friends and the guy obviously has ideas. I hope he at least cleaned off her leg first. Actually they are just friends because she has a boyfriend at home and she wants to be faithful. But he keeps saying things like “I hope your boyfriend knows he has a great, great woman here.” But on the next to last day of the vacation, she catches him fucking some chick in the shower and gets angry like she just caught him cheating. She yells “You had 24 hours!”

Maybe I’m just old but for me that brought up more questions than it answered. Was she testing him, and if he could go for one week with just being a friend then they would drop the boyfriend, clean off the pee and start fucking like dogs? Or was she just saying that if he had fucked a girl in the shower 24 hours later then it would’ve been okay because it would’ve been the last day? I don’t get it.

At any rate he yelled back that he was hanging out with her all week and he couldn’t wait any longer. Because god knows no kid can go more than 5 days without sex or their dick will explode. It happens every day.

Whenever there is fucking in this movie, it is under the covers. Whenever somebody says something, there is a high five. In one of the greatest moments in documentary film ever, a couple gets out of bed and high fives each other. Good game. Way to hustle.

You know the more I think about it maybe I actually did like this movie.

MTV
This entry was posted on Tuesday, June 17th, 2003 at 9:33 am and is filed under Documentary, Reviews. You can follow any responses to this entry through the RSS 2.0 feed. You can skip to the end and leave a response. Pinging is currently not allowed.

One Response to “The Real Cancun”