If a horror movie is a big hit, and it doesn’t look totally stupid, and especially if it ends up getting theatrically released sequels, I usually watch it at some point, just to give it a shot, or to understand it. For example after a while I sat down and watched all the SAW movies they had made up to that point, even though it was not something I had followed before. As a subscriber to Fangoria Magazine it is my duty. They got those “Chainsaw Awards” you can vote on every year, you want to take that shit seriously. But I always avoided JEEPERS CREEPERS.

Maybe you can guess why. The director is Victor Salva. I remember his movie CLOWNHOUSE being pretty creepy in the ’80s, but years later I read that he was convicted of molesting the kid who starred in it. Salva served his time, I’m not trying to say he doesn’t have the right to make movies. And I don’t want to be that weirdo in the Ain’t It Cool talkbacks who seems to sit around waiting for opportunities to accuse Harry of being a sicko for the rare crime of acknowledging that Roman Polanski is a great filmmaker even though he did something terrible also. Sometimes people can be bad (or have bad things in their past) but make good art, and it’s okay to watch it. Duh.

But I don’t know, man. I read something about Salva’s movie POWDER that said it had pedophilic subtext in it, that it idealizes and camera-ogles hairless male bodies in uncomfortable ways. I haven’t seen the movie, so I’m not saying that’s a fair criticism, I have no idea. But it kept me away. I see even commercial movies as an expression of the personalities and the world views of the people who made them. I guess I just wasn’t up for a peek into the mind of this guy who was lucky enough to have Francis Ford Coppola bankrolling his first movie, still found time for his child porn side project.

But here I am doing this summer of 2001 study, and Salva’s JEEPERS CREEPERS was the last big movie of the summer, released on the last day of August. Genre-wise it’s a little different from the “big summer popcorn movie” I’m trying to focus on, but I consider late August horror movies to be an under-recognized part of the summer tradition. Almost all of the intervening summers have had horror releases in the last half of August, giving us movies like FEARDOTCOM, JEEPERS CREEPERS II, EXORCIST: THE BEGINNING, HALLOWEEN REMAKE, HALLOWEEN REMAKE II, THE FINAL DESTINATION, PIRANHA 3D and THE LAST EXORCISM just in time for people to ask “Why didn’t they wait for Halloween?” This year FINAL DESTINATION 5, FRIGHT NIGHT REMAKE and DON’T BE AFRAID OF THE DARK REMAKE all came out in August.

So I decided to finally break my boycott and watch JEEPERS CREEPERS. Stayed away from the director commentary, though, because those don’t represent the views and opinions of United Artists, who knows what that perv is gonna start talking about? 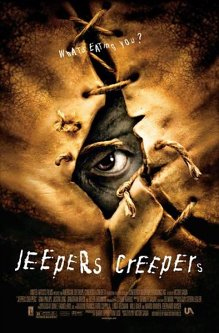 Okay, all that out of the way I’m happy to report that JEEPERS CREEPERS is a solid, clever, original horror movie. I can see why it caught on. It might’ve influenced that movie I like HIGHWAYMEN in its great pacing, its scary use of roads out in the middle of nowhere, and most importantly its escalating weirdness.

The story begins with a bickering brother and sister (Justin Long and Gina Philips) driving the scenic route back from college to their mom’s house in a beat up Impala. After taking some time to show the dynamic between the two, to set up some things about their lives and to get a feel for the open road, the two have a DUEL or ROAD GAMES or beginning of TEXAS CHAINSAW MASSACRE 2 type road incident where a crazy looking old van almost drives them off the road. Okay, that was scary, but everybody’s okay, let’s get on with our lives. Then they drive by an old church and notice the same van parked there. And the driver is out of the van. Dumping something into a big pipe. And the something is a bloody sheet tied around a body-shaped object. Possibly a body. Oh, and he sees them seeing him.

I love how this movie just keeps moving along and revealing more and more oddness. It keeps setting up things in the dialogue that you expect to turn into standard horror movie plotting, but it’s mostly just tricks to fuck with your head. Every time it seems ready to settle into a standard horror movie type some other unexpected thing is ready to come along and change everything. At first it seems like it could be a road-stalker movie like DUEL, ROAD GAMES, THE HITCHER or JOYRIDE. But they go back to look into the pipe, and it becomes a finding-the-evidence-before-the-killer-gets-back, Hansel and Gretel type deal. And they go to the diner and try to get help, so you think it’s gonna be a they’re-telling-the-truth-but-nobody-believes-them. But not long after the cops have heard their crazy story everybody witnesses some guy breaking into their car and sniffing Justin Long’s dirty laundry. “And liking it, from the looks of it.” That’s not something I have seen a Freddy or a Jason or even a Leatherface do before.

Convinced that something weird really is going on here the cops head back to the old church where young Mr. Long has promised a stash of hundreds of corpses, and we’re ready for the ol’ I-swear-they-were-right-here, what-the-hell-is-going-on, you’ve-got-to-believe-me. But again, it’s not going where it seems like it’s going. I’m being free with the spoilers now because this is ten years old, so if you’ve been saving it you might want to stop reading.

I wish I woulda seen this back then because I knew from the magazines that the killer was some kinda monster. That must’ve been a hell of a reveal. It’s still a great moment when the kids are driving toward the church with the cops right behind them and through the back window we can see that motherfucker drop down and land on top of the police car. He punches through the roof, grabs one cop by the top of the head and yanks it off like he’s picking fruit. And then they watch him, you know, kinda… make out with the severed head, and then eat its tongue. You know. One of those type of movies.

I sort of had mixed feelings about the Philips character. She reacts more with anger than with fear, and yells at people too much, making her hard to like. But I sort of appreciate that it makes her different from a standard modern horror gal. She’s got the required cut-off jeans and sleeveless blouse, but not the screaming. When her brother wants to look into the pipe and she says “See, this is why boys are stupid” it seems like a legitimate expression of her bitter personality and not a self-conscious attempt at post-SCREAM horror screenwriting. They both get grating at times, though. Maybe people would be quicker to help them if they wouldn’t yell at everybody.

The IMDb bulletin boards actually led me to some interesting information about this movie. That’s extremely rare, so it’s worth acknowledging. The beginning of the movie has a very urban legend type of feel, but it turns out it comes from a real incident where a brother and sister (older than in the movie) saw a guy driving crazy in a van and later saw the same guy dumping some bloody sheets. The clear connection between the real incident and the movie is that the brother and sister play a game where they make words based on the letters in license plates, and therefore remembered the maniac’s plates.

Specifically the movie must’ve been inspired by an Unsolved Mysteries episode about the case. Instead of starting with the main story of an agitated dude who killed his ex-wife the episode brings us into the story from the perspective of the brother and sister in the van incident. In fact the JEEPERS scene where they see him dumping the body is staged pretty much the same as the sheet-dumping in the episode. Check it out:

As far as they say there is no human-eating demon-man involved, but of course it was an unsolved mystery at the time so maybe more information came out later. So they really shoulda called this “based on a true story.”

So, being partly an adaptation of a real murder, and being written and directed by a convicted child molester, and now that I think about it having a guy enjoy smelling Justin Long’s dirty laundry, it is hard for me to recommend this as a really fun horror movie. But that’s exactly what it is if you look at the movie on its own. Definitely one of the best movies of summer of 2001.

legacy: there is a JEEPERS CREEPERS 2 and they’re supposedly working on a part 3. Salva directed the sequel and a weird inspirational 2006 movie called PEACEFUL WARRIOR. Justin Long has gone on to become a much bigger star, mostly in comedy, but was in another good horror movie, DRAG ME TO HELL.

datedness: I don’t think it’s as stuck in a specific time period as many teen horror movies are. The cars are already retro, the kids look and dress similar to the kids in the later Michael Bay produced shitty horror remakes, they don’t have a bunch of pop culture references in the dialogue or anything like that.

would they make this now? Yeah, they would do a remake because the name sounds familiar.

Gina Philips Justin Long Summer of 2001 Victor Salva
This entry was posted on Wednesday, August 31st, 2011 at 12:56 pm and is filed under Horror, Reviews. You can follow any responses to this entry through the RSS 2.0 feed. You can skip to the end and leave a response. Pinging is currently not allowed.