I know what you’re thinking: if I had remembered that there was a STREET KINGS 1 I think I would be surprised to find out that there’s a STREET KINGS 2. Well, this is a new movement of unexpected DTV franchises along with S.W.A.T. and SMOKIN’ ACES. To my surprise it also fits with the current trend of increasingly high quality DTV sequels.

STREET KINGS 2 doesn’t connect to the characters or events of the first one. It’s just another story about a cop whose former, possibly dirty partner gets killed, and the investigation that ensues. There’s another unlikely partnership, an internal affairs investigation, etc. But it is its own thing, it’s not like one of those WILD THINGS sequels we’re all familiar with and understand what it means when I make reference to them because it’s such a universal touchstone for “DTV sequel that is just a rehash of the plot of the first one but with different characters and not done as well.”

The original STREET KINGS was a very L.A. story, born out of the legendary corruption of the LAPD and the gangster mentality of the anti-gang CRASH squad. So the sequel tells another one of these uncovering-secrets-and-grey-areas cop stories, but one that comes very specifically out of the unique history and culture of Detroit.

Just kidding. It was originally written for L.A. but they moved it to Detroit for the tax credit. They use the locations really well though, and show some cool cars. 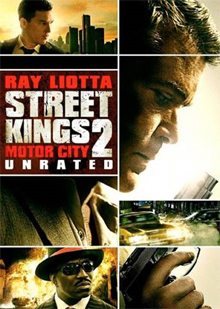 Ray Liotta plays a cop who got shot during an undercover drug buy three years ago, now he walks with a limp so he’s gone from supercop to guy-who-speaks-at-schools-dressed-as-McGruff-like-crime-dog. (If he was the real McGruff at least there would be some dignity in that.) His glory days are seemingly behind him, but when his partner from the old days turns up dead he wants in on the investigation, and sure enough his boss forces him on the hot-headed young lead detective Marty, played by Shawn Hatosy.

The script plays it a little lighter than the original (which was written by James Ellroy and Kurt Wimmer). These cops explore the grey areas, but they don’t wake up puking or carry airplane bottles of vodka for drinking during shootouts. The script doesn’t use racial slurs for instant grittiness. The n-word shows up but only on the lips of the characters that are supposed to say it in movies: black men and white men with swastika tattoos.

I can’t deny that it’s mostly a blend of standard cop movie tropes: the cop who figures out he can’t trust other cops, the loving family put in danger, the surprise reveal of important information, the clean cop who starts to question maybe he shouldn’t go after the dirty cops because maybe what they’re doing is right in the grand scheme of things, etc. But I think the writing (by Ed Gonzalez and Jeremy Haft, who I bet wrote it as a good cop/bad cop team) is still pretty solid, it’s pretty effective. Shortly after it had me theorizing about who is the mysterious covered-in-shadows shooter it already said “okay, you got me,” revealed who the bad guy was and switched from whodunit to whydunit.

Not to be controversial, but in my opinion (and I speak only for myself) I believe that an argument COULD be made that in some ways Ray Liotta is a better fit for gritty cop roles than Keanu Reeves. Just my two cents. Freedom of speech. He’s really good in this, a multi-layered character with alot of problems but somewhat sympathetic even at his worst. I also really liked Clifton Powell in a much smaller role as a really menacing character, a cop that doesn’t mind dressing and acting more like a pimp. He has a foul mouth that just drips with cruelty. He refers to Hatosy as “a newbie like you, fresh out of his mama’s pussy.” He’s nasty enough to get away with using internet slang in real life and make it sound cold-blooded.

The director is Chris Fisher, mostly a TV guy but he’s done a couple other DTVs including DIRTY (somebody said it was good but I haven’t seen it because it stars Cuba Gooding Jr.) and S. DARKO (not that bad really). I also want to give credit to cinematographer Marvin V. Rush, because this is a good looking movie, something unusual even in today’s improved DTV action. They especially seem to know how to shoot dynamic angles on muscle cars and people inside cars. The opening credits are really cool, it’s a POV shot inside a car driving around Detroit and the names are reflected off the hood of the car. My one cinematographical complaint is that there are 3 shootouts done in the dark. The first one makes sense because it’s in a dark brothel and the identity of one of the shooters needs to be hidden, but the other two are repetitive and unclear. But for the most part the filmatism is good with nice clear editing and good music too.

For me, STREET KINGS 2 was able to overcome its mostly cliche elements partly through this style but mostly by having Shawn Hatosy in the lead role. Remember this guy? I forgot about him. When he was young enough to play a teen he was in THE FACULTY and OUTSIDE PROVIDENCE. I guess he’s been in a ton of other things since then, including playing a cop on the show SOUTHLAND. Mostly supporting roles, he’s a character actor. What I like is that he doesn’t have your typical leading man looks, but he’s a good actor. So he seems like a cop and not like a guy who would be hired to play a cop. At first he’s the young guy that Ray Liotta has to work with, seemingly the Chris Evans role from part 1. You look at his face, you don’t think that guy’s gonna be the lead, he’s gonna be the sidekick or something, right? Well he quickly takes over and it’s what makes the movie.

Or maybe it’s him and Liotta both. There’s a scene where their families spend a day together, just getting to know each other, and it adds a real weight and believable life for these characters that there’s not usually time for in a movie like this. It’s the old vet who’s been through the shit and trying to cash in, the young guy right at the point in his life where he feels like he has a career and a pretty new marriage and he’s having a kid. They’re so different but they realize they’re both cops and they start to relate as peers and buddies. They seem like real people, they do this shitty job so they can have days like this being out in the sun with family and friends, not worrying about getting shot at in the dark.

Chris Fisher Clifton Powell DTV DTV sequels Ray Liotta Shawn Hatosy
This entry was posted on Friday, May 6th, 2011 at 3:02 pm and is filed under Crime, Reviews. You can follow any responses to this entry through the RSS 2.0 feed. You can skip to the end and leave a response. Pinging is currently not allowed.