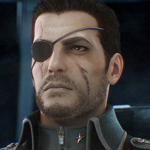 Remember how they made two DTV sequels to STARSHIP TROOPERS? Now there’s a new one, but I think the world will be sharply divided over whether we consider this part 4 or not. It does continue the futuristic bug war star trooping of Captain Carmen Ibanez (originally Denise Richards, now Luci Christian), master psychic Carl “It’s afraid!” Jenkins (originally Neil Patrick Harris, now Justin Doran) and Johnny Rico (now promoted to General). But one thing they did different, they gave it to the Japanese animation director Shinji Aramaki (APPLESEED) to computer it up. Now instead of deliberately white bread humans it’s creepy Real Doll type animated characters sort of along the lines of FINAL FANTASY and those types of computer animated pictures.

Casper Van Dien, who returned as Rico in part 3, is credited as an executive producer (as is Ed Neumeier, sitting out writing duties for the first time in the series). And I was convinced that Van Dien was doing the voice for Rico, the only character made to sort of look like the original actor (though upgraded with badass eyepatch and facial scars). I didn’t notice a name on the credits, but all other sources claim it’s a prolific anime dubber named David Matranga. Still, I choose to believe! To me, General Johnny Rico is played by Casper Van Dien 2.0.

But he doesn’t come in until later. It starts with this team of elite troopers on a starship that have to troop over to another starship to troop against a bunch of giant star bugs, or whatever. It’s like a space station that got infested with those bugs. I don’t know if you remember this, but it used to be that fans of the Robert A. Heinlein book could not appreciate the great movie that was made out of their book because it didn’t have flying robot suit things that were apparently in the book. Well I think now they might be wearing the robot suits, because they all got this bulky metal armor and sometimes it makes them jump high. So congratulations fellas, here is a not nearly as good movie that you will like better because of the clothes they wear.

One thing I noticed about the robot suits: special emphasis on the metal butt cheeks. 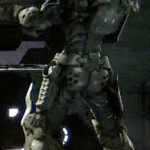 The troopers all have nicknames like “Ice Blond” and “Ratzass” that are stenciled onto the front of their helmets so that we can try to tell them apart. I noticed one guy had kind of a monster face painted onto his helmet, but if they all had flair like that I didn’t spot it. Luckily one girl, Trig (Emily Neves), likes to take off the armor and just wear a sleek sleeveless thing. Also Captain Ibanez shows up and she’s doesn’t wear the armor, she has a pretty stylish uniform that shows off her (computer generated) womanly attributes and looks like it’s made out of foam rubber.

I gotta tell you that during the first 10-15 minutes I was kinda thinking I wasn’t gonna watch the whole thing. So it’s a compliment to say that by the end I was kinda into it. The script by Flint Dille (Garbage Pail Kids cartoon, Mr. T cartoon, video games) does a couple fun things. There’s a guy who practices kung fu, so then we know it’s him when one of the metal suits starts doing kung fu. Carl – who’s now Minister of Paranormal Warfare – looks, sounds and behaves way more blatantly evil than in live action, but at the end they all have to treat him like he’s their buddy, since they are on the same side and did grow up with him.

The best new character is Trig. She bravely crawls through a vent to kill a queen bug or something, and tells a dude he can’t go with her because he wouldn’t fit (he probly doesn’t know he could take the armor off). Trig is a great marskwoman and she counts off each bug she kills as she tries to reach a certain number for revenge purposes. (SPOILER: I was actually kinda touched when she was killed and the other guy picked up her gun and continued the count for her).

They play a little bit with the prosthetic limbs introduced in Verhoeven’s movie. There’s a scene where two troopers bond over one giving the other guy arm-replacement surgery. It turns out the surgeon had never really done it before. The robot arm is pretty shitty, because the military is cheap, but the guy doesn’t mind.

Other than that though there’s not many hints of Verhoeven’s satire, and that’s clearly a bigger mistake than switching over to computery animation. If Verhoeven had made the straight forward star war movie that sci-fi readers wanted back in 1997 it might have been pretty cool (he is a good director, after all), but I doubt most of us would give a shit now. The reason why we remember it so well is that it’s was pulpy, audaciously-violent-for-its-time sci-fi fun that also is completely sarcastic, gleefully throwing propaganda in our faces to make us realize that maybe we shouldn’t be rooting for these young people to lose their body parts and lives in the name of avenging a giant space bug that the government says farted a meteor at us. It’s awesome and it’s funny and it’s one-of-a-kind, and then you take that out of it and it’s guys shooting at giant bugs. Not as special, in my opinion.

The live action DTV sequels tried to keep a little bit of that edge, especially part 3 (directed by Neumeier), where one of the characters was a celebrity for singing a propaganda anthem. This one only pays homage to it by having a character say “Would you like to know more?” As foreplay.

There’s at least an attempt to be a little Verhoevian. Early on there’s a bunch of CGI tits and ass. They still have the co-ed showers, and we learn that one guy uses his psychic powers to know when one of his co-troopers is in there and he can take a look. Ibanez gets a private shower away from the leering eyes of psychic dudes… but not away from us, because there’s totally gratuitous butt and boob shots as she grimaces and thinks while showering. (In a PG-13 movie she would’ve just been staring dramatically out the window.)

One bit I liked is when they show up at a space station after a massacre. Parts of chopped up bodies, intestines and shit hanging out, and globs of blood are floating around weightlessly. I wish there was more like that.

Another detail I liked, there was a “lens” used mostly for the exterior space shots that looked like it had some condensation on it. A subtle simulated equipment flaw that adds subconscious realism. They also had different times where bug blood gets splattered on the lenses, but we’ve seen that before (including in BLADE II).

There’s obviously an incredible amount of designing and rendering that goes into making a movie like this, but it’s similar enough to various video games and Japanese comput-ime that there’s still sort of a been-there-done-that weighing it down. For a while it seems like they switched to computering without taking advantage of it, like they were gonna still use the same bugs and ships and limited settings as they would in a live action DTV, but with bulkier armor and creepier faces. But eventually it really kicks into gear, they make it onto a huge ship, Johnny Rico starts bringing in different weapons and vehicles. There are some drop ship things that are animated to look like upside down NASA rocket footage. Rico has the best vehicle, a robot suit like those things in THE MATRIX REVOLUTIONS except with wheels on the feet so it can drive around fast and chainsaws for hands (which he makes good use of). It gets pretty exciting when he runs up the tongue of a giant bug and stabs it in the eyeball. (I noticed it wasn’t the same eyeball that he himself lost. But I still bet it has some special significance to him.)

Unfortunately I think the movie needs way more of that over-the-top-ness, and it needs to go way further with it than it does. The lack of humans has a distancing effect that demands it. Hell, even if it was live action it’s been 15 years since the first one. It needed to be pretty fuckin extreme to get a rise out of us, to keep making us think I can’t believe I’m really seeing this. If it had been completely balls to the wall – no, actually we need balls through the wall – it might’ve been something special. Instead it’s something passable. But sometimes that’s better than nothing.

I don’t know that comput-ime is the way to go with these DTV sequels to studio movies, but my they should try doing some for ROAD HOUSE, CRUEL INTENTIONS, WILD THINGS, WALKING TALL, etc.

Casper Van Dien DTV DTV sequels Ed Neumeier
This entry was posted on Wednesday, August 29th, 2012 at 2:03 am and is filed under Cartoons and Shit, Reviews, Science Fiction and Space Shit. You can follow any responses to this entry through the RSS 2.0 feed. You can skip to the end and leave a response. Pinging is currently not allowed.