SOURCE CODE is a fun thriller with a clever sci-fi premise: what if for some reason they remade GROUNDHOG’S DAY as a DE JA VU type thriller, and instead of Bill Murray it’s the guy who looks like the guy who used to play Spider-man and instead of having one day to cover the weather he has 8 minutes to figure out who planted a bomb on a train? That would be kinda cool, right?

Jake Gyllenhaal plays the guy, an army helicopter pilot in Afghanistan who suddenly finds himself in another dude’s body on a train in Chicago talking to a gal (Michelle Monaghan) he never met. Some minor incidents happen (guy knocks over papers, other guy forgets wallet, etc.), the train blows up, he finds himself disoriented in some kind of cockpit talking to Vera Farmiga (ORPHAN) and Jeffrey Wright (SHAFT remake) on a monitor.

They’re avoiding telling him the details, but somehow he’s being sent into this simulation of a real incident from earlier in the day and they need him to figure out who this bomber is before the motherfucker (or motherfuckette) detonates a dirty bomb in Chicago. If he could do it by switching faces with John Travolta I’m sure he’d do it but in this case it’s the reliving 8 minutes approach that’s gonna work. So Jake keeps getting sent back in to relive and relive those 8 minutes, doing it different each time, questioning people, snooping around for clues. 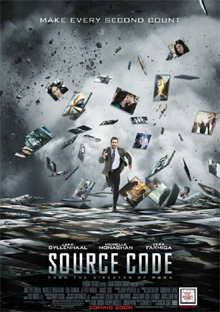 Since there’s no real consequences other than having to start over he doesn’t mind punching dudes out, throwing their shit on the ground and yelling at them, fun stuff like that. He does not use it for a ZAPPED type scenario of looking at boobs or anything like that. And he doesn’t climb on top of the train to re-enact scenes from UNDER SIEGE 2: DARK TERRITORY. I guess Gyllenhaal looks more like a Bogosian than a Seagal anyway.

The director is Duncan Jones, the guy who did MOON. This is sort of like his bigger budget Hollywood payin’ the bills movie that probly made more money just during the time I was sitting watching it than MOON has made to date. I wonder if INCEPTION has made it easy to sell this kind of crazy thriller concepts like this? People will say “it’s like GROUNDHOG DAY meets such-and-such” and mean it as a bad thing, but it’s a good premise I think. It’s got the ratcheting tension as he goes through it each time adding new information, trying a new thing – can he really get off the train? What happens if he doesn’t blow up? Isn’t it obvious that this dark-skinned guy he’s harassing is innocent? etc.

The repetitious story is what makes it fun. It becomes kind of a game or a puzzle that you play along with him, thinking what you would try to do or who on the train you think it might be. Also it has kind of a cool structural trick that his missions lead to a goal of figuring out who the bomber is, but that’s not the climax of the movie. When he reaches that goal he then chooses his own ultimate goal, and that’s what the end of the movie’s about.

I mean yeah, it’s like GROUNDHOG DAY but in this version of the story he doesn’t get the Sonny and Cher song, he doesn’t meet Ned Ryerson, he gets coffee spilled on his shoe instead of stepping in a puddle, he does get to fall in love but man it’s more difficult when you only got 8 minutes. Sometimes taking a shit takes longer than that. This is a cool idea for a suspense thriller.

But if you expect Mr. Jones to bring a MOON level of artistry to his Tony Scott movie I’m afraid it’s not gonna happen. MOON was a movie with a real strong mood and atmosphere, this is well made but the feel of it is just your standard slick movie, nothing more or less. That’s not the worst crime in the world but SOURCE CODE does seem to be headed toward a brick wall from the very beginning, and if you got a lot of faith in the director you think “wow, he knows he’s headed for that brick wall, but he’s not slowing down, in fact he just did a side-wheelie for no reason, I wonder what kind of ingenious trick he has up his sleeve to land this thing!?”

I mean after all this is a guy who’s falling in love with an 8 minute memory of a woman that died earlier today. This is going nowhere happy, right? Unless they kinda cheat or something. Hmmm.

Well, let’s just say in my opinion it’s not the most satisfying or convincing solution to this caper. It didn’t kill the movie for me, but it at least stabbed it in the thigh a couple times. This is not an outsider filmatist elevating a mainstream movie, it’s a mainstream movie elevating an outsider filmatist’s career. But that could be a good thing too. He’s got some chops, he’s got some smarts, although maybe less than we thought. It’s not as stupid-preposterous as THE HAPPENING, but then again it’s not as ballsy-preposterous as KNOWING. It’s just clever with sprinklings of questionable. Not too shabby, not the exact right amount of shabbiness, but somewhere around there, you know. Medium shabbiness.
The End. Unless you’ve already seen it, in that case I got a little more for you down here.
.
.

Yeah, I thought the ending was stretching it too much. I guess in retrospect I can see what they were going for, and they deliberately left the details of the technology unexplained, but I don’t know if I can buy that a computer creates an alternate dimension that your consciousness can go to when you die. I mean does this computer have to keep running? What if the power goes out, where does his ghost go then? Doesn’t seem to make much sense to me.

The one positive thing about where it ends up is that it kind of retro-actively fixed some earlier problems I had with the movie. It bothered me that he kept trying to do shit like make phone calls and things outside of the train, as if that would mean anything. I kept thinking come on buddy, do you not understand what you’re doing here? Because they explained it to you at the same time they explained it to me. But I guess in the end it turns out he was right, he is living in a new alternate dimension so he does have a Bizarro dad he can call. It does have meaning and consequences. So when he seemed like he was being an idiot he was actually being a pioneer.

The real problem with comparing SOURCE CODE to GROUNDHOG DAY though is that that’s a really fuckin good movie and although I enjoyed this one it doesn’t have as much substance. See, SOURCE CODE has a cute feel-good type deal where he wants to make everybody on the train happy because he realizes, or has a religious faith in the idea that what happens in these 8 minutes actually does have consequences on a larger world. This is actually the opposite of what I found so moving last time I watched GROUNDHOG DAY, the part where he starts dedicating his day to trying to save the life of a sick homeless guy. In SOURCE CODE you’re good to people because you know it will have an effect on your life and other people’s lives. In GROUNDHOG DAY you know that being good to people makes no difference, and you do it anyway, because that’s what you want to do. In SOURCE CODE you’re being nice, in GROUNDHOG DAY you’re truly a good person. It’s subtle but if you think about it it’s a totally different philosophy. You can’t knock what Jake is doing there, but compared to what Bill is doing you could argue there is a selfish motivation there, or a guilt motivation, that’s not there at all for Bill.

Oh shit, I think I might be turning Buddhist!

Duncan Jones Jake Gyllenhaal Jeffrey Wright Michelle Monoghan trains Vera Farmiga
This entry was posted on Monday, April 4th, 2011 at 2:33 am and is filed under Reviews, Science Fiction and Space Shit, Thriller. You can follow any responses to this entry through the RSS 2.0 feed. You can skip to the end and leave a response. Pinging is currently not allowed.