Remember SUNSHINE? Well now we have MOON. It’s not really at all like SUNSHINE, because it’s about being on the moon, not going to the sun. But it’s another serious, thoughtful sci-fi movie, which is kind of like a bald eagle these days. They still exist but you don’t see them too often (and sometimes their beaks are deformed [not sure if that last part is a criticism of SUNSHINE’s last act or just me not knowing when to end the analogy]). 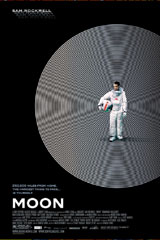 MOON is another loneliness in space movie like SUNSHINE, 2001 and DARK STAR. And come to think of it it’s working class in space like DARK STAR or ALIEN. Sam Rockwell plays Sam Bell (the name suggests this is possibly an autobiography in my opinion), the one person on a moonbase watching over the equipment a corporation uses to harvest some kind of helium energy. He’s near the end of his 3-year contract and is obviously at the end of his rope. He seems to be kind of like the night watchman, a guy who just hangs out making models and using the gym and every once in a while has to drive out in a rover to jostle something around, load something or check on the equipment.

It might be kind of a cool job for a while. You get to see the moon. I’m sure Earth looks gorgeous from up there. And sometimes isolation can be nice. I’d probaly get more writing done up there. Figure out how to fix that novel.

On the other hand the loneliness and boredom are gonna eat at your soul. The craziest part is this guy has a family he left behind. Apparently there was some kind of marital strife, so maybe that’s his dramatic gesture of separation – living alone on the moon. But he gets recorded messages from his wife, and it’s obviously tough. Shouldn’t have signed up for 3 years. That’s a little long.

Like THE HURT LOCKER he just has to wait out the 2 weeks and he’s home free. But he’s losing it, both mentally and physically. He’s seeing things. There’s an accident and a major error in the base’s operations that the movie is about, I won’t say what it is. But, you know, moon stuff happens. Can he make it? Is the company trying to screw him? Is it time to unionize?

The ship’s computer is a great cinematic creation. His name is GERTY, his voice is Kevin Spacey, and his physical body is a box of machinery that moves inside the base suspended from a ceiling track, like track lighting or the Peter Pan ride at Disneyland. He also has – separate from his body – one of those robot arms that used to play chess. And he has a screen that roughly illustrates his moods as different smiley or frowny face icons. It’s amazing how much personality they get out of him within those limitations.

Of course you’re not gonna trust a machine like this. It’s not human. It’s programmed for a corporation to maximize productivity and profits. But the ingenious part is that GERTY isn’t evil. It does what it can to protect Sam. It even seems to lie to the corporate overlords at one point. I’m not saying it’s Wall-E, but compared to HAL 9000 or Mother this is a lovable computer. And I think it’s just an accident. It’s not taking on humanity or anything, learning to have emotions. I think it just happens to fall within its programming to help Sam in these situations. And to try to be nice to him. I like seeing a computer trying to do things like break bad news lightly or answer touchy questions honestly. Their relationship, or simulated relationship, is my favorite part of the movie.

I figured this movie was fairly low budget, later read that it was VERY low budget. But it looks like exactly the right amount of money was spent. A good set, and I think they use models for the exteriors. Looks good. But of course the movie belongs to Rockwell’s performance. He’s funny and crazy and more sympathetic than in many of his roles, with a touch of Giamatti shlubbiness.

It’s a solid movie from first-time director David Bowie’s Son. Not gonna replace the iconic sci-fi classics, but will remind you that they don’t make ’em like this too often. But they’re out there, flying high and proud, like our nation’s symbol the bald eagle. the end.

Most people I’ve talked to who have seen the movie seem to immediately bring up the matter of a specific thing that turns out to be going on, and it being easy to see coming. I must be slow because I definitely don’t think I was ahead of the movie, and possibly a little behind where I was supposed to be. But I didn’t see this as a plot twist movie and wouldn’t want to make a big deal out of “figuring it out” or not.  It doesn’t matter. There’s a bit of a mystery at first and then it resolves itself and the joy is in watching it unfold, not trying to be the best puzzle solver.

Duncan Jones Sam Rockwell smart sci-fi space loneliness working class in space
This entry was posted on Friday, August 28th, 2009 at 9:57 pm and is filed under Reviews, Science Fiction and Space Shit. You can follow any responses to this entry through the RSS 2.0 feed. You can skip to the end and leave a response. Pinging is currently not allowed.