My man Clint’s new directorial work HEREAFTER hit the home video this week, and it’s some creepy timing. The movie opens with vacationing TV reporter Cecile de France (from HIGH TENSION and MESRINE but once again I didn’t recognize her) leaving a Thai beach hotel one beautiful morning to shop for souvenirs in an open air market. Something about the filmatism here reminds me of JAWS, it’s just that heightened sense of sight and sound, you can hear voices and tones from every direction and almost feel the warm breeze on your neck. It’s so beautiful and peaceful but you know something horrifying is rumbling in the distance. 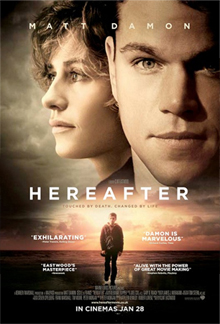 Yep, it’s a tsunami, and her ordeal is depicted with terrifying realism. You might remember the movie was nominated for a visual effects Oscar. This movie isn’t for everybody, but the opening will knock everybody on their ass. It’s not going for thrills and what not, just a Force of Nature, an Act of God, something powerful that she has no choice but to be swept up in.

She washes up and some people try to help her, but her heart has stopped. And she has one of those experiences you hear about, where she sees the light, and she sees silhouettes of the departed (not the movie). It’s Hereaftervision. She survives, but she remembers what she saw, and it completely changes her life.

There are no more disaster sequences after that. Or car chases or parkour or even exorcisms. I think I read this described as Clint’s “supernatural thriller,” but that’s a terrible description. It’s barely about the supernatural and not at all about thrills. The movie jumps between three stories: de France’s character dealing with life now that she thinks she had a glimpse of the beyond (not the movie); Matt Damon as a guy who made alot of money helping people communicate with their deceased loved ones but was so haunted by it he quit to work at the C&H Pure Cane Sugar factory; a shy British boy stuck dealing with the death of his twin brother while being taken away from his alcoholic/junkie mom.

I guess I like this more than most people. I like its deliberate pace (in other words, you’ll probly think it’s too fuckin slow) and its serious tone (not alot of laughs in this sucker). Actually, this picture here gives a pretty good description of what the movie is like: 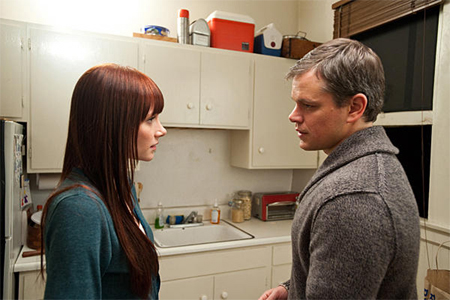 Yep. They’re in the kitchen. They’re talking at regular volume. This goes on for some time.

It’s a sad movie. You want the ol’ poignancy, Clint’s got it. De France was this big time reporter and author, she got to go on a nice vacation, she had a boyfriend that she seemed to like, things were good, but this experience will not leave her head and she can’t deal with her old life anymore. She can’t do her job so they give her a book deal but she can’t even write the book her publishers agreed to, she turns in something about the afterlife. It’s like if I was supposed to write a book about Dolph Lundgren and I turned in one about how to build a time machine. But obviously if I was gonna do that I would just build the time machine and go back and tell them it was gonna be a time machine book so they wouldn’t be disappointed not to get the Dolph one. But this character does not have that luxury.

Then there’s Damon, who plays a little frumpier than usual in this one, and with his hair starting to gray. Like Jonah Hex he almost died and afterwards seemed to have this ability to communicate with the dead. He could bump into you and have a DEAD ZONE moment, he can apparently see your loved ones and dictate their messages to you. But he gave that up a long time ago and only does it now under pressure. This is not a real new idea but the approach is unusual: he doesn’t get drawn into some big case or something. He just doesn’t like to do it, but his brother’s always sort of suckering into doing it for friends and stuff, and it bums him out.

He says it’s not a gift, it’s a curse. In the same way that having a truck is, because then everybody calls you when they need help moving. But of course it’s worse, in my opinion, than helping people move. Probly takes up less of your afternoon, but nobody wants to deal with that intense of emotion on a daily basis. Helping people with their grieving.

Anyway, you see what trouble it is when he meets Bryce Dallas Howard in a cooking class and gets a date with her. He tries to avoid the subject, but eventually you gotta deal with the ghostly powers when you’re in a relationship. Poor guy.

Then the twin, that kid gets it the worst. As a team those twins were so capable, they were able to cover for their fucked up mom so they wouldn’t get taken away from her. But his brother was kind of the mastermind and the talker. Now he’s alone and doesn’t know how to express the pain he’s feeling. All he has is his dead brother’s hat, and the damn teacher makes him take it off in class. In the background there’s another student wearing not a burqa but whatever the headress is that doesn’t cover the face. Everybody knows that has meaning to her, so she gets to wear it, but nobody knows what this hat means to him.

There’s alot of themes in here I noticed. One of them is the the idea of randomness and coincidence and one thing leading to another. De France realizes that her publisher is mad at her because she wrote this book because she couldn’t deal with the questions she had from the near-death experience she had because she got swept up by a wave because she went outside because her boyfriend didn’t buy gifts for his kids. What she doesn’t realize is that a similar chain of events will move her from France and Damon from America both to London, where their lives will intersect in a good way.

When you’re always worrying about your death, your fate, you get stuck wondering what it all means, why it all happens. If only you could talk to the loved ones you’ve lost, maybe you could cap it off right, tell them what you should’ve, find out from them what you need to. But it ain’t gonna happen, not in this movie. Even when the spiritual or supernatural gets involved, the events in our lives aren’t given a convenient level of meaning. At one point (SPOILER) it seems like the dead twin blew his brother’s hat off to stop him from getting on a subway that he would’ve died on. Turns out, when Damon apparently communicates with him, that he wasn’t trying to save his brother’s life or anything, he just didn’t want him wearing his hat. Even ghosts don’t know what the fuck to make of all this. Shit happens.

It starts with a tidal wave, it ends with a question mark. That’s how you know Clint is the Motherfuckin Man, when he has the resources and the balls to make a slow-paced, intimate character drama about death and loss and facing one’s mortality, but to open it with an incredibly realistic and intense disaster sequence. I mean he could’ve had the poor lady survive a car crash or a heart attack, he didn’t need to get epic on us, but that was what he wanted. And those tools happened to be available to him.

In fact it’s kind of a reverse disaster movie. A disaster movie shows us the stories of a bunch of ordinary people from different walks of life during a seemingly mundane day, it pretends we give a shit about them when really we don’t, we’re just waiting to see them get tormented and in some cases killed by the big awesome disaster sequence, and during that the character’s lives will intersect and they’ll learn about themselves through surviving the destruction. HEREAFTER has the disaster at the beginning, only then does it tell us about the characters, and I actually do give a shit about them, and instead of finding their inner hero while deep in the shit they quietly search for closure on some shit that happened to them a while ago. It doesn’t build to a climax, it slows down to a stop.

Maybe it’s ’cause I never saw a Clint-directed movie on blu-ray before this, but to me it seemed slicker than his other movies, a little more vivid in its colors and bold in its camera moves and such. It’s all his usual collaborators, nobody new on the team except the script is by Peter Morgan (the guy that did THE QUEEN and FROST NIXON).

From looking at it I don’t think I would’ve known it was Clint. But its restraint, its confidence, its smarts, those are all his. The one dead giveaway is the music, once again composed by Clint. You know that sound. He’s got his simple, gentle tinkering throughout, and at the end it turns into some light jazz. ‘Cause Clint is telling this story so he’s gonna tell it the way Clint does.

Enjoy the jazz. Don’t worry about no ghosts. Nobody knows if there’s an afterlife, even people from beyond the grave. Just appreciate your life while you can.

Bryce Dallas Howard Cecile De France Clint Clint Eastwood Jay Mohr Matt Damon
This entry was posted on Wednesday, March 16th, 2011 at 1:34 am and is filed under Drama, Reviews. You can follow any responses to this entry through the RSS 2.0 feed. You can skip to the end and leave a response. Pinging is currently not allowed.