CHOKE is an early mixed martial arts documentary, released in ’99 and directed by one Rob Goodman. They don’t call it “mixed martial arts” or “MMA,” they seem to like “no rules fighting,” even though the movie makes it clear that there are rules, and even shows people arguing over what the rules should be. It focuses on the 1995 Vale Tudo tournament, a Japanese freestyle fighting competition similar to Ultimate Fighting Championship except in a ring instead of an octagon. It has ropes instead of walls and is a totally different shape although the number 8 is divisible by 4, in my opinion. 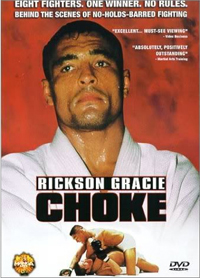 The main focus is returning champ Rickson (pronounced Hickson) Gracie, who is kind of bummed because he keeps getting trophies and he’d rather have belts. They don’t explain all of this in the movie, but the Gracie family are sort of the founding fathers of MMA. Rickson’s dad Helio and uncle Carlos created “Gracie Jiujitsu” aka “Brazilian Jiujitsu” 65 years earlier, combining the Japanese martial art with wrestling and creating the style that killed the flying kick. When Rickson’s older brother Rorion started the UFC I’m sure some people hoped it would be like BLOODSPORT or some shit, but then his younger brother Royce was the champion of the first two UFCs and it quickly became obvious that a kick is just an invitation to be pulled down to the ground and choked or arm-barred into submission.

We see Rickson play-wrestling with his little sons, training with his students, secluding himself in nature before the tournament, doing crazy KICKBOXER type training methods like walking forward with a giant slingshot around his forehead. I wish they showed how he gets out of that thing. Seems potentially dangerous. That could be important information for somebody that’s gonna try that shit at home. And it doesn’t specifically say not to try it at home, so obviously that means that you are supposed to try it. Otherwise they would say.

One thing I thought was real interesting was seeing his wife and imagining what it’s like for her. I’m not trying to be judgmental, but it seems the Gracie family is very male dominated. You look up Helio on wikipedia and it lists his seven sons, all black belts, and two daughters, no mention of belts for them. Why wouldn’t he teach them too? Isn’t the whole point of the martial art to use leverage to overcome disadvantages in size and strength? Logically he oughta be teaching his daughters before his sons. But tradition dictates otherwise, I guess.

Anyway, this lady’s married into this family of brothers who dedicate their lives to this martial art. They’ve taken turns being the best fighter in the world, and at this time the best is her husband. In one scene he talks about how Gracies don’t have sex before a fight because it “wastes energy,” and she’s in the background making a salad, not disagreeing about what a waste it would be. I’m not saying it’s a real problem, but it must be tough for her sometimes. The uncomfortable part is when she’s talking about her “behavior” being good and he seems mad until he realizes she just means she’s not distracting him with the sex. I think for a second he’s thinking “Wait a minute, what bad behavior do you usually have?”

There’s a funny editing joke there where he says he’s “about to explode” from the not-wasting-energy regime and it cuts to him moaning in pain from being submerged in an ice cold river, the Gracie version of taking a cold shower. (That’s another one of his pre-fight rituals.)

They also follow some of the other fighters in the tournament. There’s a little bit with the Japanese fighter Koichiro Kimura, including a funny scene where his parents seem to learn from the camera crew what type of fighting he does, get worried and start quizzing him about it. He has kind of a “Mom, it’s not a big deal!” attitude, like a teenager arguing for a later curfew.

But the movie is almost stolen by Todd Hays, a young Texan who claims to be a veteran of hundreds of street fights, including at a bar where they lock you in a parking garage until one fighter can’t continue. There’s a scene where they give him the gloves he has to wear in the Vale Tudo and he’s upset at the amount of padding. He laughs, “It’s a slumber party and we’re gonna have a pillow fight.”

He seems a little hesitant about entering the tournament, not because it’s intimidating to have so few rules, but because it’s too many rules. He’s used to those parking lot fights. But he does it because his real dream is not fighting. He wants to be an Olympic bobsledder, and just entering, even if he loses in the first round, will at least fund his sled.

Gracie and Hays never fight, but the movie kind of plays it like these two characters are facing off, the disciplined champion against the scrappy bar-fighting bobsledder.

In a way it’s about two other men, Rickson’s father Helio Gracie and Todd’s trainer Dale “Appollo” Cook, fighting through them like Rock ’em Sock ’em Robots. Both of them say as much. The elder Gracie, after bragging about his sons being unbeatable, says it’s really his system that’s winning, not his sons themselves. In a kung fu movie I’d probly love that he was boasting like that, but in a documentary it makes me feel bad for his sons working so hard and seemingly not getting the credit and respect they obviously want from him. And Cook comes right out and says that he’s fighting vicariously through Todd, he’s the brain fighting with Todd’s body. Like Master and Blaster, I guess. (I’m not sure who’s the brains behind his bobsledding.)

Cook is a really funny character, because Todd doesn’t talk much and Cook doesn’t stop talking much. There’s a pre-tournament meeting where they go over the rules and we see Cook arguing against a rule change that he thinks favors grapplers over strikers, making it unfair. Todd, Rickson and the other fighters are shown sitting around, their heads down, either uncomfortable with the debate or bored with it. During the fights Cook’s always gotta say his opinion about what they’re doing wrong, what the mistake was that made them lose, what they should’ve done. He always fuckin knows everything, the way he tells it.

There’s some laughs on the Gracie side of things too. Rickson’s young son Rockson says some funny shit backstage, telling him “you were like Superman!” and calling his opponent “this little guy” and “poor guy” as if it’s a foregone conclusion that his dad will win, and he’s trying to show sympathy.

Sadly, the internet tells me that Rockson has since died in a motorcycle accident (rumored to be something more nefarious). On the positive side, Todd Hays really used the fights as a springboard to bobsledding. He was in the Olympics four times and won a silver medal in 2002. When you look him up on wikipedia it doesn’t call him a mixed martial artist, it says he “is an American bobsledder.”

This is the type of documentary I like, where the topic is interesting but it’s mainly the characters and the scenes that you remember, the odd things that happen and that people say. And I took a little bit of helpful philosophy out of it too. Rickson claims that he doesn’t worry too much about winning, because on one hand he wants to remain the champion, on the other hand he knows it would be nice to lose all the pressure of being the champion, not having to constantly worry about keeping that status. So he just doesn’t think about it. I think that’s a good way to approach things. Every once in a while I have some opportunity come up, I gotta talk to some guy about some gig I might get or a big article about one of my books or something. And I hate dealing with that shit and always think I’m gonna blow it. But if I think about Rickson Gracie I can just think you know what Vern, just be yourself, and if it works out you get to do the thing and if you fuck it up it’s good because you don’t have to do the thing. Either way you win.

I’m not jumping in a cold river though.

MMA
This entry was posted on Monday, October 11th, 2010 at 10:10 pm and is filed under Documentary, Martial Arts, Reviews, Sport. You can follow any responses to this entry through the RSS 2.0 feed. You can skip to the end and leave a response. Pinging is currently not allowed.