While THE SOCIAL NETWORK seems to still be the conversation topic-of-choice among movie buffs I know, there’s one obscure side-issue buried in there that I haven’t seen discussed: the evidence that George Miller did know what he was doing with that JUSTICE LEAGUE super hero movie that he wasted years of his life doing only to have it cancelled. The reasons it never happened I’m sure had to do with budget and studio politics and disagreements about the best ways to utilize the corporation’s valuable licensed properties and many other factors. But I’m sure epic negativity and whining from every single comic book fan plugged into a computer didn’t help.

You guys know better than I do, but if I understand correctly The Justice League is the team-up of the DC Comics characters which is Superman, Batman, Green Lantern, Wonder Woman, somebody else. While comic book “geeks” have had a constant erection since the Marvel Comics announced their plans to do separate Hulk, Captain America and Thor movies to set up for a later THE AVENGERS joint where for sure the same cast members will all definitely return and the fans will all have loved every one of their separate movies and the actors will have great chemistry and the movie will perfectly combine the mythologies of each of theirs into a perfectly satisfying and balanced team adventure, DC was planning a different approach. They would do a movie unrelated to their other ones, with different actors cast as Batman and Superman, and under the direction of the genius director of the MAD MAX trilogy.

The conventional wisdom online was that this was a travesty, that Miller should be stoned to death, and that the only way this movie could possibly work would be if Christian Bale reprised his realistic Batman in a magical world where the teenager from the TV Superman in high school soap opera was Superman and there’s a green guy with a magic ring from space that is afraid of the color yellow, and a girl who wears no pants even though people can see right through her plane and get a good look at her crotch. I disagreed. I don’t see why they can’t keep making the awesome Nolan quasi-realistic Batman movies while a totally different Batman sometimes shows up as a supporting character in a completely different movie. I’m pretty sure we can keep track. I never got confused when they had different guys playing Dracula or Bruce Lee, Jet Li and Donnie Yen all playing Chen Zhen.

The online backlash exploded when Miller’s cast of mostly unknowns was announced. Admittedly they were pretty young. I would’ve gone with Dolph Lundgren as Batman, but Miller chose a 22 year old named Armie Hammer. This really went over terribly because of the common superstition that if somebody has a goofy name they can’t do a good job at things, and must be made fun of, and they probly haven’t heard that one before, so it’s a good one.

But I remember looking up Hammer on IMDb and learning that he was named after his great grandfather Armand Hammer, industrialist, art collector and philanthropist. The trivia said that Armie was a trained magician, and that he collected hunting knives. And I thought shit, it sounds like this kid is Bruce Wayne. What do we know? Miller has met the guy, he thinks he’s gonna work, I feel like he might know what he’s doing. But the movie was never made, so we never found out, and life went on. 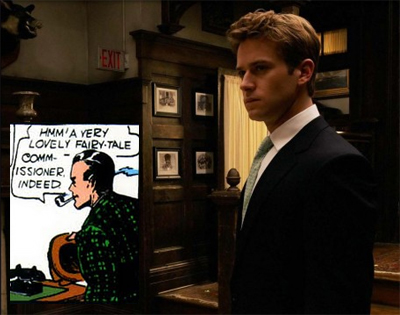 Then THE SOCIAL NETWORK came out, and in it you can’t help but notice that Hammer is great playing the Winklevoss twins, who sue Mark Zuckerberg for ripping off their websight idea. And a feeling starts to sink in that wait a minute, George Miller did know what he was doing. Armie Hammer is a comic book drawing come to life. He’s 6’5″ with broad shoulders. He has a deep voice, but (unlike many actors of his body type) sounds very intelligent when he talks. He looks nothing like any of the previous Batman actors, but probly more like a super hero than any of them.

Yes, he is young (and would’ve been a couple years younger when JUSTICE LEAGUE would’ve filmed), but wasn’t Bruce Wayne also young once? That was the idea I got from some of those movies. I don’t think he started real old like Colonel Sanders when he invented his technique for frying chicken. Supposedly Miller wanted the cast to grow into the roles over a few movies, like the Harry Potter kids.

What I’m saying is he would’ve made a good Batman. It’s obvious. I think a few nerds owe a certain world class director an apology.

So now that it’s much too late, a few details have leaked out about what Miller was gonna do. According to Quint’s interview with Hammer, Peter Jackson’s company Weta had made all the costumes. The entire movie was storyboarded. The actors had come to Australia to train.

The crazy part is how method Miller was getting about psychologically grooming them for their roles. According to Hammer:

“We had a brain surgeon, a psychiatrist, a Joseph Campbell expert, and all of these people in every single table meeting we had for a month and a half. And then all of the characters were also training as their characters, so The Flash, Adam Brody, was training as The Flash with rubber bands, so he’d be fast and twitchy. Aquaman, Santiago Cabrera, was swimming a lot and Miller would send him to go swim with dolphins in northern California for hours so he would be used to being around sea creatures. Batman, being the only human of the Justice League and having to really prove himself there, he had to be the consummate martial artist, as well as the ultimate detective, so he was playing psychological games with all of us. He would leave me out of things, like intentionally, but I wouldn’t know this until months later when I would just get the feeling of like “What is going on? Why is everybody– ?” Because he wanted me to constantly be getting into that paranoid mind frame of The Batman.”

He goes on to explain that the actor playing Superman was brought in a month earlier than the rest of the cast so he would know everyone on the crew and be popular and looked up to, like Superman.

I thought Miller would’ve done a great job because of his incredible filmatism. In the MAD MAXs he created some of the great car chases and badass personas of all time. In ROAD WARRIOR and BEYOND THUNDERDOME he created perfect sci-fi worlds. In BABE 2 he used digital effects combined with live action and puppets in ways that nobody has matched. In both BABE 2 and HAPPY FEET he somehow used talking animal characters to create chase scenes better than most everybody else is doing with humans in the last decade. I wouldn’t really want to watch a movie teaming up those characters, but then you say “George Miller” and it all makes sense. That’s the guy who could do it without it being stupid. That’s the one guy who could make it amazing.

And then you read this stuff and it sounds like he was going further into it than I even imagined. I’m thinking “jesus, what’s he gonna do with the dude who runs fast!?” and he’s thinking “how do I make this rich kid paranoid enough to be the real Batman?” This thing would’ve been incredible. And they decided it would be better to spend millions of dollars on it and not make it than to have the super-balls pull the trigger. They’d rather have it sitting on the invisible DVD shelf next to Jodorowsky’s DUNE.

But it’s okay. It wasn’t meant to be. Miller has moved on to the even more exciting one, the fourth Mad Max film, FURY ROAD. Like JUSTICE LEAGUE he’s had the movie written and storyboarded for years, he’s cast INCEPTION’s Tom Hardy as Max, he’s built 130 cars and motorcycles and shipped them in to the locations in Australia, hired stunt teams and has them rehearsing for 298 stunts, and they developed new 3-D cameras just for this movie, so I think this one is–

Ah shit, they postponed filming until 2012? If ever?

God damn it, Universe. What the fuck are you trying to pull? Give George Miller a break. Give the world a break. The world needs more George Miller movies. We are not Charlie Brown, and you are not Lucy. For once let us kick the fucking football. It’s the right thing to do.

Armie Hammer George Miller
This entry was posted on Tuesday, October 12th, 2010 at 12:01 am and is filed under Blog Post (short for weblog). You can follow any responses to this entry through the RSS 2.0 feed. You can skip to the end and leave a response. Pinging is currently not allowed.

147 Responses to “The fake twin who could’ve been Batman”