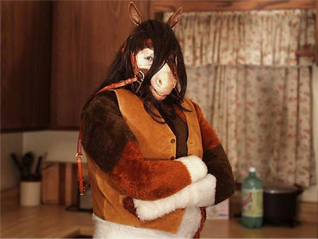 He’s disguised with his pest control gear, so I guess his victims aren’t creeps or punks in this one, they’re pests. Too bad THE EXTERMINATOR was already taken, that would’ve been a more fitting title than THE HORSEMAN. Since he doesn’t ride a horse, wear a horse-themed super hero costume, work with horses or train them to fuck these guys to death Enumclaw style I assume the title must be a Four Horsemen of the Apocalypse thing, or Australian slang for an overprotective father. If it’s the first one it’s a little pretentious.

This movie didn’t make me think about the morality of revenge so much as it made me think about the morality of enjoying revenge movies. I mean, I liked the DEATH WISH movies, all five of them. I liked THE EXECUTIONER and THE EXTERMINATOR. I even liked the revenge part of I SPIT ON YOUR GRAVE after enduring the first, less likable part. But somehow some of these modern ones like this, HARRY BROWN and DEAD MAN’S SHOES seem a little too sadistic to me. A little too self righteous. I kind of feel like I’m supposed to feel happy about these guys being tortured and dying, but I just feel kind of depressed.

I think maybe it comes down to how seriously I take the movies. DEATH WISH 3 may be meant every bit as seriously as THE HORSEMAN. I doubt it, but let’s say it is. Well, I don’t take it as seriously. It’s a cartoon. Larger than life villains getting blown through the side of a building with a bazooka, because they murdered his loved ones. But the pests in THE HORSEMAN aren’t exaggerated villains, they’re these regular seeming guys who don’t think they did anything wrong (some of them did no more than be in a porn video) crying and begging for their lives. DEATH WISH is based on westerns, with chases and shootouts staged for suspense and thrills. THE HORSEMAN is shakycam sloppy, staged to seem real. The fights are messy and brutal, not cool. 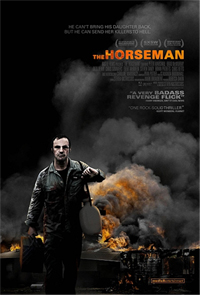 This brings up the question of whether an ugly, unpleasant revenge movie is better than a cool, enjoyable one, because it’s not cleaning up and glamourizing vigilante murder. It’s not Hollywooding it up. It may or may not side with the avenging horseman, but it doesn’t make him look Charles Bronson awesome. Well, I think that’s a legit point of view morally, but a weak one cinematically. Because I don’t know about you guys, but I already got the message that revenge lowers you to their level a long time ago. I got it from the first DEATH WISH. I got it from two of Wes Craven’s movies and one of their remakes. I got it from DEATH SENTENCE. But most of these were able to get the message across while feeling more like an entertaining story and less like a punishment for something I didn’t even do yet. Not that THE HORSEMAN seems preachy at all. I’m just giving it the benefit of the doubt, assuming this stuff is supposed to be disturbing and not cool. Because if it’s supposed to be fun escapism somebody fucked up.

In fact it makes me reconsider that question about whether or not Bronson was miscast in DEATH WISH. Of course Bronson as a liberal architect is a bit of a stretch, and in the book he’s supposed to be the last guy you’d expect to kill a motherfucker. Bronson is definitely not the last one. He would be in the top three guys you’d expect, I think. And there’s that story about how Sidney Lumet almost did DEATH WISH as a black and white art movie starring Jack Lemmon. Could’ve been amazing. Brian Garfield, the author of the book, thought Bronson was horribly miscast, not believable.

But as I’m watching these gloomy no-fun-allowed, rubbing-your-nose-in-it vigilante/revenge pictures I’m thinking shit, maybe the unbelievability is part of what I like about it. Maybe if it was a weakling feeling empowered by murder it would only emphasize the ickiness of the concept and play down the awesomeness. Kevin Bacon was more fitting as a regular dad getting pushed into murder in DEATH SENTENCE, but his victims were as far-fetched as in any DEATH WISH. Cartoon punks with silly tattoos and John Goodman with a ridiculous accent. I don’t know, I’m thinking maybe I need that for it to work.

But after an hour in THE HORSEMAN gets away from the revenge formula, mixes it up a little. That’s when it gets more interesting. Most of the movie has been told in flashback while he gives a ride to this teenage runaway. (SPOILERS comin up.) I started worrying he was using this girl as bait for the porn guys or that her friend she’s going to meet is somebody he’s after. Instead he just has a sweet moment giving her advice. It seems to help her, and that seems to help him. He seems to decide to end his revenge spree. He’s gotten a reasonable amount of revenge and doesn’t want to overindulge. And then he gets pulled over.

This is a good moment because for a minute anyway it destroys any illusion of him being a righteous horseman. No, he’s a maniac wanted for six murders. You see him through the girl’s eyes now as she’s hearing this. After that it goes off in other directions that are arguably less interesting, but at least the setup changes. Now instead of avenging someone who died he’s protecting someone who’s alive. Also something ambiguous happens that makes it seem like it’s gonna turn into DEATH WISH 2 before it’s even finished with part 1.

So it’s a pretty interesting movie and it’s a well made one by a young rookie director. But you Australians do me a favor and keep your youngster directors in line. You have a grand tradition of powerful filmatism. You make movies with energy but without spazzing out. You got your George Miller of course, your Richard Franklin, your transplanted Brian Trenchard-Smith when he’s on good behavior, your early Russell Mulcahy. Their lessons have passed on to newer directors like Greg McLean and probly Andrew Dominik, but maybe not this Steven Kastrissios. Believe me Australia, you don’t need to go down our road and have a bunch of young dudes with handheld cameras fucking it all up for everybody with this “it’s not important to use the art and language of cinema because it’s more realistic if the camera wobbles around and nobody can tell what the fuck is going on.” Fuck realism. Make movies. If you can’t do that I’m sending you to the outback to make you beat up a kangaroo and get fondled by Donald Pleasance.

Nobody needs to suffer that fate. The choice is yours. I believe in you, Australia.

Australian cinema post-action revenge vigilantes
This entry was posted on Tuesday, June 15th, 2010 at 1:08 am and is filed under Crime, Reviews. You can follow any responses to this entry through the RSS 2.0 feed. You can skip to the end and leave a response. Pinging is currently not allowed.

73 Responses to “The Horseman”