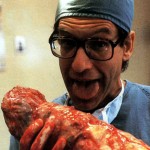 Well, they’re not technically zombies. It’s about a sexually transmitted disease. I didn’t do this on purpose, but this is yet another apartment complex based horror. It takes place at this upscale complex called Starliner Estates, which is actually on an island so it’s isolated and has its own medical facilities and armed security. The lead is not your typical horror movie lead. He’s a middle aged doctor, head of the Starliner Medical Department, and he has some of the mannerisms of Gary Shandling. When the movie starts the infection in the apartments has already began: a former teacher of the doctor is attacking a woman in a school girl outfit. And he kills her and burns her with acid. Not cool. 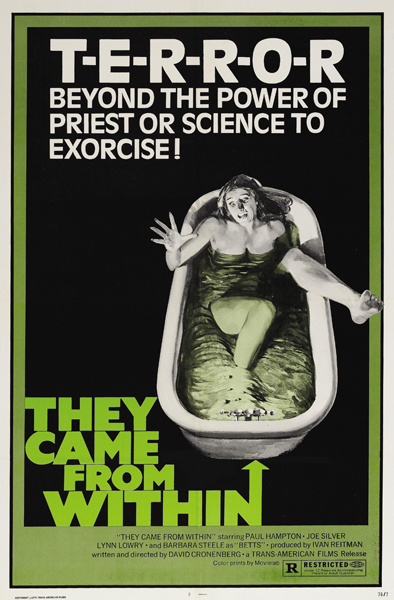 It turns out the killer doctor is being influenced by a weird parasite slug inside him that makes him super horny. Late in the movie an infected character explains the feeling: it makes you see that everything in the world is sexual. “That disease is the love of two alien kinds of creatures for each other. That even dying is an act of eroticism. That talking is sexual. That breathing is sexual. That even to physically exist is sexual.” So you want to stay away from these motherfuckers. If they see you they get a crazed look in their eye and they come after you. And even if you were into them it would be trouble because you would get the disease.

So that’s why I call them zombies. They get into a frenzy and they act like zombies. They mob people but instead of eating their intestines they try to get it on with them. This movie would be the ultimate nightmare for Edward Woodward’s prude character in the original WICKER MAN. Worse than being burned alive by pagan nymphs. Although there are some attractive people in the movie it’s far from erotic. It plays off of not just fear but discomfort and disgust. Everybody likes sex but nobody wants to see all of their neighbors constantly going at it. Well, maybe it depends on the neighbors. But this disease breaks down all the barriers we put around sex. There’s an old man making out with his daughter, for example. Everybody wants to do everybody, all the time. Not hot.

There’s a character in the movie who’s the partner of the first killer doctor. He explains the project the guy was working on which we can assume created the killer fuck slug. The guy was trying to create parasites that would help people. For example if you have a bad kidney they give you this bug which will devour your kidney and then live in its place, but it will do the job of the kidney. It’s no surprise that Cronenberg of 1975 was thinking of ideas like this. It kind of makes sense but it’s creepy as hell. Who wants a parasite for a kidney, even if it doesn’t turn into a killer fuck slug? That’s worse than a baboon heart.

To me the coolest part of the movie is that the hero treats it as a medical emergency, not as a horror movie. There are a few infected people who get shot (they just die like normal people, no supernatural powers) but the drama is about “how do we survive this?” not “how do we kill these things?” It’s also interesting that this was made before DAWN OF THE DEAD. DAWN is about ninety-eight times better, but they do have some similarities the way they strategically combine a zombie sort of story with a very modern, maybe a little satirical ’70s location. Cronenberg’s version is much cruder, but also more surreal. In one part the doctor is running down some stairs when he hears barking. He stops and sees two little girls on leashes barking like dogs. So he runs the other way. That motherfucker is weird, is what I’m saying.

So SHIVERS, like its killer fuck slugs, is a unique specimen, a weird unnatural hybrid up to no good. It was made for the Canadian equivalent of Roger Corman, which is funny because I can’t imagine the American Roger Corman letting somebody make a fucked up movie like this. So we should be glad Cronenberg was born in Canada. If you like David Cronenberg and want to see where he came from it’s worth checking out.

David Cronenberg
This entry was posted on Tuesday, October 30th, 2007 at 6:55 am and is filed under Horror, Reviews, Science Fiction and Space Shit, Thriller. You can follow any responses to this entry through the RSS 2.0 feed. You can skip to the end and leave a response. Pinging is currently not allowed.