In this one Scanner Cop (still Daniel Quinn) has a new Scanner Case. He’s gone from we-behind-the-ears rookie to completely-dry-throughout-the-entire-ear-area cocky veteran with long hair and even – and this is how you understand what he’s all about – a brown leather jacket. 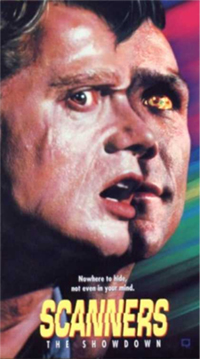 By now people don’t just think he’s a psychic, he’s out in the open about being a scanner. In SCANNERS, scanners were completely underground. By part 3 they were rumored and discussed at parties. At this point they’re common knowledge enough that Scanner Cop can say to a doctor, “You know she’s a scanner, right?” and not have to explain what that means. On the other hand, people always seem surprised and confused when they use their powers.

The science of scanner medication has also improved. You know how in SCANNER COP he had to stay off his pills to use his powers and that was real dangerous because he was guaranteed to go crazy in a couple days? In this one they brush that off by having someone mention it and somebody else says oh no, he has new medication that lets him use his powers.

“The Showdown” of the subtitle is between Scanner Cop and a new Scanner Villain named Karl Volkin (Patrick Kilpatrick, Mercenary #2 from UNDER SIEGE 2). He’s a maniac scanner who escaped from an asylum and is going around scanning other scanners, defeating them and absorbing their powers (“like a vampire”). A girl (Khrystyne Haje) who Scanner Cop wants to date and who also is trying to help him find his birth mother tracks down an obscure case that happened in Canda one time, a case we at home would call “the David Cronenberg movie SCANNERS.” Kind of sad that the earth-shattering events of the original story are now just an old newspaper clipping of something even Scanner Cop never heard of and that doesn’t even affect his case that much. But what this guy Volkin is doing is supposed to be like what happened at the end of SCANNERS, if I understand this right.

So like Michael Ironside he’s got a list of all the scanners, but he’s using it more as a hit list or a list of different snacks he wants to eat than as a recruiting tool. He goes around finding the scanners and causing them to shrivel up like mummies. One poor bastard hears his girlfriend go to answer the door and then has to peel her gooey head off the security caging.

I’d say it’s not as dumb as the case in SCANNER COP, but it’s sure not exciting enough. It’s very repetitive. In slasher movies at least you can imagine they might slip away. This guy is too super-powered. You’re just watching him feed over and over. I mean the effects are cool like usual, but that’s not enough. It’s like I COME IN PEACE without the humor, the action, or the charisma of Dolph Lundgren.

There is one minor thing to make it seem more like a straight up cop movie: Robert Forster plays his commanding officer now. Poor bastard. He doesn’t have alot of screen time and what he has is 100% dedicated to generic cop lines and exposition. But he’s Robert Forster so he still seems to make it a little better than it should be. He has that professionalism.

Also I had no idea while watching it but if you ever watch this keep your eye out in the opening scenes, it turns out that redneck sheriff who first encounters Volkin is the Lone Ranger himself, Clayton Moore. I guess I didn’t recognize him with his mask off.

The funniest part of the movie is definitely the showdown itself, when the Scanner Cop finally faces down Volkin. For some reason the girl keeps telling him that the only way he can defeat Volkin is through illusion. She doesn’t say it like, “I had this idea that you should try using the power of illusion!” She says it very matter of factly that it’s the only possible method of victory. No disrespect to her librarian skills or her scanner heritage, but what the fuck does she know about this? How is she so confident she has the solution? She’s telling Scanner Cop what to do. Who does she think she is? This is Scanner Cop you’re talking to, lady!

Anyway there are these two innocent people that get knocked out by Volkin, then Scanner Cop comes in and they have a scanner fight and Scanner Cop loses and gets torn up… but then it turns out no, it was one of those unconscious guys being controlled by Scanner Cop and made to look like him in Karl’s mind. So Scanner Cop walks in again and says, “Fooled you, didn’t I Karl?” Real proud of himself.

Yeah you fooled him. Fooled him into murdering an innocent man instead of you! Way to protect and serve, asshole. Then he does the exact same thing with the other guy. I don’t know, maybe these guys were supposed to be dead already, and he just horribly desecrated their bodies so that their loved ones will not be able to have the closure of an open casket funeral. But it seemed to me more like he used two injured people as human shields (and puppets).

Anyway, Volkin yells “WRETCHED COP BASTARD!” So it’s a pretty funny scene. And with that David Cronenberg’s original vision of 14 years earlier was finally fulfilled, and there were no more SCANNERS movies.

DTV DTV sequels Robert Forster
This entry was posted on Monday, June 7th, 2010 at 11:45 am and is filed under Horror, Reviews, Thriller. You can follow any responses to this entry through the RSS 2.0 feed. You can skip to the end and leave a response. Pinging is currently not allowed.

55 Responses to “Scanners: The Showdown”