Power Kids aka Force of 5

POWER KIDS is another Thai action movie but for kids. It stars the same two girls from MUAY THAI GIANT plus three boys, and no giant. There’s the Thai Wil Wheaton as sort of the main kid, the Thai Corey Feldman as the slicked back hair charmer guy who thinks he’s hot shit, and the first kid’s little brother who has a weak heart.

The first 35 minutes is just like a cheesy kid’s movie about trying to get the money to buy their brother an RC car for his birthday, trying to stop the bullies at the RC track, also getting in a fight with a big drunk Australian guy (not Nathan Jones sized, but big). Then all the sudden two very bad things happen:

1. the little brother’s heart gives out and he’s gonna need a transplant

2. the hospital where the transplant heart is located gets taken over by rebel terrorists taking an ambassador hostage to make a point

So the kids try to sneak in and get the heart, just like the Goonies, the Explorers or the Hardy Boys or somebody would, but those little weiners would all get shot and killed before they got into the building and it would be a pretty short and depressing movie. Possibly the Little Rascals could’ve pulled it off, but I’m not betting on it. These kids use their youth to take the rebels off guard but also they use their muay thai skills to beat the god damn shit out of them. It’s not HOME ALONE type hit-in-the-balls-with-a-flying-object-and-it’s-hilarious type of kid movie violence, it’s actually pretty bloody. 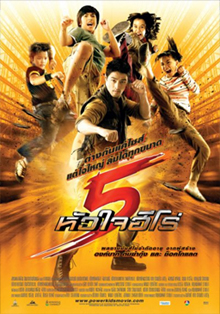 This would probly not be considered a kid’s movie in the U.S. We always complain that our media is violent and there’s a double standard about sex, that people got no problem letting their kids watch the Joker murder a guy with a pencil but would be upset if they brought them to a movie where you see a sideboob. And of course that’s true. But also there’s a line drawn somewhere and I don’t think a movie where little kids have brutal, bloody fights with terrorists would fly over here.

But it is definitely a kid’s movie, you can’t really get around that. And I mean that in a derogatory way. But I did enjoy the novelty of seeing kids do insane Thai style stunts. I’m not saying it’s up to the Tony Jaa standard, but it’s past adult level for most countries. These kids do alot of jumping off walls and people, alot of flying knees and kicks. One kid runs and jumps knees first through a window, breaking through glass and hitting a dude. The same kid has a bird’s-eye-view shot of running up a wall, doing a flip and landing both knees on a guy that’s laying on the ground.

Just because it’s kids I assumed there was some kind of special effect involved, some wires or digital enhancements or something. But both shots I just described are shown from other angles on the making-of featurette, and they were done live on set. It’s funny to see these kids beating up the adults and every time the take ends they give a little respectful bow. I assume the adults also do that to each other, unless it’s just a weird etiquette thing they make the Thai stunt youth do, like saying “May I be excused, please?” before leaving the dinner table.

Just to make things seem a little more even they actually have a little girl on the terrorist team. I know it sounds ridiculous but she’s a girl that was orphaned during war so she joined the rebels. She’s an intense-looking little kid and I think they actually get some successful drama out of you wondering if her quest for revenge or her kid-solidarity will win out. It would be sweet if she became friends with them and it would be fucked up if she killed them so either way you’re gonna get some drama.

So yeah, like all the Thai movies I’ve ever seen this has alot of crying and tragedy and melodrama, even though it’s DIE HARD meets muay thai meets little kids.

It’s kinda weird being an adult watching a movie about kids. I’ve learned over the years to appreciate a family film if it’s well made, but usually that’s gonna be about a talking pig or a cartoon character of some kind. But when it’s a human child and you’re supposed to relate to them it feels kind of ridiculous. You can put your sympathies with somebody totally different from you but when it’s a kid sometimes it feels like shit, I been through that before, I don’t want to go back to it. Or jesus these kids today, I lucked out by not being born in their time, I want to take advantage of this and not have to think about what kind of stupid shit they care about. So for example I would rather help somebody move than watch the documentary about that little boy with the bangs that sings on tv, even though it’s from the director of STEP UP 2-3 and even though Drew McWeeny claimed it was an interesting documentary. I just don’t want to look at that kid or hear his music or remember that it’s something that people care about. The modern world just isn’t my bag. I’m a John-McClane-man in a that-kid-from-Twilight-that’s-in-the-John-Singleton-movie-where-it’s-like-Bourne-Identity-with-teens world.

So I get some of that discomfort watching this, I feel out of place with these kids even though they got a tough life and all that. I kinda feel like I’m watching the Disney Channel at first, and not the part with Disney cartoons. But then it turns into what it turns into, which is a movie where gunmen are trying to murder little kids who are throwing around a box with a human heart in it. And bad things happen to the heart.

I mean if the singer kid was gonna get bloodied up and fight for a box with a human organ in it then maybe I would consider watching it, I’m not sure. But that is not something I expect to happen.

winner: the children of Thailand

Thai Thai action
This entry was posted on Friday, November 11th, 2011 at 12:03 pm and is filed under Action, Family, Martial Arts, Reviews. You can follow any responses to this entry through the RSS 2.0 feed. You can skip to the end and leave a response. Pinging is currently not allowed.