The Return of Bruno

My new review collection YIPPEE-KY YAY MOVIEGOER comes out at the end of this month, and since it’s named after Bruce Willis I figured I should celebrate by digging out some of the Bruce movies I’ve never seen or don’t remember much and write reviews of them. And what better place to start than his hour long 1987 HBO music special THE RETURN OF BRUNO? Well, I’m sure there are better places. But this is one possible place.

I believe in something called Karaoke Syndrome. It’s something that many famous actors suffer from. Everybody dreams of being a rock star, even if they’re already a movie star, so they try to use their projects as excuses to get on stage and fuck around with a guitar or microphone. One famous victim of KS is Mike Meyers, whose characters in WAYNE’S WORLD, AUSTIN POWERS and THE LOVE GURU all had to be in bands. Dan Aykroyd and John Belushi also suffered from KS (did the Blues Brothers and bee people things on SNL even count as comedy?) but luckily they channeled it into one of the best comedies of all time. 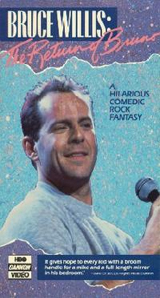 Bruce did not channel his into the best anything, but it looks like he was having fun at least. I know that’s faint praise, but that’s the best you can really do with this thing. Even the cover of the video has a quote that says, “It gives hope to every kid with a broom handle for a mic and a full length mirror in his bedroom.” I hope that was meant as a compliment, but I’d have to see the context.

THE RETURN OF BRUNO special is an extension of the liner notes for the album, which pretend “Bruno” is a major figure in the history of American music. The special is hosted by Dick Clark in the form of a “Rock Legends” show focusing on the story of Bruno Radolini (Bruce), the most legendary singer of legendary singers who inspired every celebrity that they could get to do a fake interview for the special. So Wolfman Jack claims Bruno gave him his nickname, Grace Slick says he had the best set at Woodstock, Ringo Starr says he turned the Beatles psychedelic, etc. etc. You got Paul Stanley, Brian Wilson, the Gibb brothers, others. Some guy on the IMDb says it’s “The rock parody Spinal Tap wishes it were,” but unfortunately there’s nothing that comes across as jokes exactly, just a fake alternate history. I guess it’s kind of funny to see Bruce in fake Woodstock footage. Kind of.

Supposedly Bruno was real rebellious and eccentric and created various trends in popular music. You know the drill. They got Dick Clark there so they do a fake American Bandstand appearance, then they got Don Cornelius doing a show (not Soul Train) where he performs “Under the Boardwalk” with the Temptations. They talk about some incredible album he recorded but then the masters were destroyed in a fire. Same thing happened to all my best books.

But after a chunk of this fakumentary stuff it cuts to modern day Bruce in blue jeans, black t-shirt and white tennis shoes jumping around on stage at a House of Blues type club, playing harmonica and singing and doing his best Mick Jagger moves. He’s pretty good at harmonica and the band is very slick and professional, but let’s just say this is not the sort of music I would ever want to listen to. This is the type of music made by white people who are worshipful of old blues singers and shit but don’t have an ounce of soul in their bodies. I mean even back then you couldn’t get a horn section to sound much whiter than these guys.

I was happy when Bruce changed into the white pants, labcoat and sunglasses. Then it seemed like he was trying to put on a show more than just hanging out. To be fair, he’s not just standing motionless on stage, he’s trying to keep people interested. And it’s true, Bruce does kind of look like a kid singing into a broom handle. He’s not a great singer but he sure knows how to run around and jump and stuff. And there were many people in the front happy to get a high five from the guy from Moonlighting.

I guess the best part is the end credits, when Bruce is hanging out backstage riffing about how and why he created Gumby and Pokey. When you see him talking at this point you realize it’s the only part where he got to really act, the rest of the time he was just singing and posing in different period costumes.

THE RETURN OF BRUNO is from the director of DOUBLE DRAGON and Michael Jackson’s “Liberian Girl” video and the writer of NEIL DIAMOND: HELLO AGAIN. Mysteriously it has a logo at the end for “Hudson Hawk Productions,” even though this was 4 years before that movie. I guess while he was doing this little in-joke pet project he must’ve already been cooking up the next one.

Bruce Bruce Willis fakumentary
This entry was posted on Friday, April 2nd, 2010 at 6:54 pm and is filed under Bruce, Music, Reviews. You can follow any responses to this entry through the RSS 2.0 feed. You can skip to the end and leave a response. Pinging is currently not allowed.

49 Responses to “The Return of Bruno”