You know how these things start out. A little kid in some medeivalish village, frolicking in the sunshine, his dad is forging a sword, everything is happy. There could be a whole movie just about this worry-free childhood, or about hobbits jumping on a bed, but instead the band of savage marauders storm in on their horses shooting arrows, lighting shit on fire, throwing women on the ground. The pricks.

And of course they kill the kid’s family and drag him away to become a slave in a mine. Not to sound racist, but it seems like Barbarians are always trying to pull shit like this. I mean, not all Barbarians. There have been many great members of the Barbarian culture throughout their proud history, such as Conan the Barbarian and Theobald Boehm, the inventor of the modern flute. But SOME Barbarians act like a bunch of dicks, doing shit like this. That’s where the stereotype comes from.

Well, after the opening credits it could go through the whole thing where the kid escapes and then tries to run away but he meets some wise individual who trains him and teaches him about his destiny and then he swings a sword around in the air for practice, possibly has two ferret pals, passes a series of tests or trials, gets advice from an old hag oracle, and after some long boring stretches he meets a girl, more boredom, possibly fighting a monster or ogre of some kind, perhaps has to solve a riddle, then at the very end tries to get revenge. Not WOLFHOUND. This one skips right to the kid, now fully grown, long-haired, scarred and badass, laying siege to the fortress of the Man-Eater (one of the two dicks responsible for the massacre of his family and Grey Dog clan), killing that asshole and taking back the sword his father made right before his death. Also he has a pet bat. 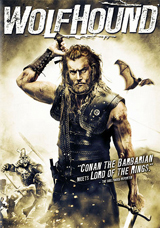 Man, I really liked this movie. It’s a Russian picture, based on a Russian fantasy novel. The Russian title translates to “Wolfhound of the Grey Dog Clan.” The Weinsteins released it here, but I don’t think they cut it and although it defaults to a dubbed version you can switch it to Russian with English subtitles. And it’s even a rare case of the American poster being better than the original one. Wolfhound is such a badass the Weinsteins don’t even know how to ruin him.

I gotta compare the appeal to CONAN THE BARBARIAN and BEASTMASTER. But just by way of being filmed in Russia it gets a really different feel to its fantasy world. Cold and grey, mountains and forest trails, and everything’s dirty. Maybe there’s a little FLESH AND BLOOD in there. It definitely reminds me more of the old ’80s sword and sorcery movies than of the post LORD OF THE RINGS era, but it’s more entertaining than most of them. Digital effects are very subdued until the climax, and then the style of the effects reminds me of the stop motion monsters that would be in the old school ones.

Anyway, the plot is not about his quest for revenge, it’s mostly about the consequences of having already achieved his revenge. Killing a motherfucker nicknamed “the Man-Eater” sounds real good on paper (such as a scroll), but this time it throws off the whole balance of power in the area. Turns out Man-Eater was always bickering with Zhadoba, the other guy involved with the Grey Dog massacre, and that’s the only reason they never bothered to conquer the kingdom of Galirad. The king figures the only way to be safe is to send his daughter to Man-Eater Jr. in exchange for making sure Zhadoba (who now wears a scary skull-faced mask like the guy in WILLOW) doesn’t fuck with them.

So our boy Wolfhound proves himself to the princess so he can be one of her guards on the journey.

There are many reasons why Wolfhound is a great badass character. First of all he just looks cool, a grizzled, mangy bastard. Unlike, say, BEASTMASTER (sorry Beastmaster) there’s no thought in the back of your head that he might be kind of a weiner. You just look at his mug and know not to cross him. His long hair is era-appropriate, he looks like a scummy mercenary, not a Rob Zombie character. Kind of Rutger Hauer-esque, actually. And whenever he ties his hair back it means the same thing as when Billy Jack takes his boots off.

Second, I believe Wolfhound incorporates an innovative double-back or boomerang form of badass juxtaposition. See, he has this cute, squeaky pet with an injured wing that he’s very protective of, that’s the badass juxtaposition. But at the same time it’s not like it’s a baby duckling or something, it’s a fucking bat, and it’s even commented on early on that you can’t trust somebody who would carry a pet like that. So it works simultaneously as a cute thing to play off of his toughness and a demonic thing to make him seem scarier.

And he doesn’t talk much, that’s always a plus. One of the scenes where he has alot of dialogue is the one where he’s yelling at the gods.

Most importantly he demonstrates it over and over again. It’s not one of those movies that just keeps telling you how valiant he is without him having to prove it. There’s the scene where the princess’s guards don’t take him seriously so he stands in the middle of the path and tells them to get past him. There are the scenes where he seems to almost smell an attack before it happens, like the time he throws a sword to block two throwing knives and impale their thrower, thwarting an assassination. There’s the one where he’s just passing through the Bear Clan’s bridge and ends up rescuing a stranger from execution. Or the one where he summons an army of evil spirits and defeats them with fire.

You know what, here’s how you know who’s bad. Well into the movie, like 90 minutes in, we still don’t really know how he became Wolfhound. The princess and entourage are at a campfire and a lady starts singing a song that everybody likes the tune of. She explains that it’s about this brave guy in the Crystal Mountains who was the only one to escape slavery. Wolfhound stares at the ground, embarrassed, and doesn’t tell anybody that by coincidence they’re sitting with the legendary warrior that the song is glorifying.

The only reason Wolfhound almost gets bested is because of some cold-hearted treachery by the princess’s cousin. He doesn’t mean ill-will, but he’s made a deal with Zhadoba because he’s convinced it’s the only way to save the kingdom. Zhadoba wants to sacrifice the princess for a spell or somesuch, so he makes this bargain with the cousin. He says either way she’s gonna die but if the cousin helps out he gets to become king of Galirad instead of the Man-Eater’s kid. He’s not initiating a plot, he’s just allowing himself to be convinced of the moral correctness of going along with a plan where he’ll become king. So you see, he’s not evil. He’s just Jay Leno.

Wolfhound is the best kind of hero. Never preachy, scares the shit out of everybody, not motivated by doing the right thing, and yet incapable of not doing the right thing. Especially if he sees some kid in trouble, he’s definitely gonna put his quest on pause for a second and go try to help the kid. But then he won’t try to take credit for it or anything, he’ll just move on.

Also, did I mention, he has a pet bat. That’s what makes Wolfhound iconic. Snake Plissken has an eyepatch, Wolfhound has a bat.

The movie is pretty long, as in longer than some movies are, not as in longer than it needs to be. It’s kind of epic, but I’d gladly watch another one. Apparently there’s a lower budget TV mini-series called YOUNG WOLFHOUND starring the same guy (Aleksandr Bukharov), hopefully that will make it to the land of English-subtitles at some point.

I read some complaints from people who didn’t like WOLFHOUND, they seem to think it’s too much generic fantasy stuff. Instead of generic I would say classic. It’s stuff you’ve seen before but with a more interesting hero in the middle, with a higher frequency of exciting events, and a bit of a Russian spin on it to make it fresh. Also Yakov Smirnoff plays a sidekick/narrator character similar to Mako in the CONAN movies. Just kidding. There’s nothing like that.

There have also been complaints about the action scenes, which admittedly are a little choppy in the way the shots are put together, although not real shaky or quick-cutty or nothin. They’re not the clearest but I guess they have enough style and variety that I enjoyed them, they’re not stiff Kevin Sorbo type business.

Man, I really dug this movie. I don’t know if you all will like it, but some of you will. In fact I bet at least one of you will decide to get a pet bat after seeing it. That’s my guarantee. Please send me a picture of you with your pet bat and I will post it here.

adventure Russia
This entry was posted on Sunday, March 14th, 2010 at 11:24 pm and is filed under Fantasy/Swords, Reviews. You can follow any responses to this entry through the RSS 2.0 feed. You can leave a response, or trackback from your own site.