THE COLLECTOR is a new horror picture and although the title does refer to the villain (who collects people – sorry, I was hoping it was gonna be Beanie Babies too, but it’s people) it focuses much more on the other guy. Not that he’s a saint either. He’s there to rob the place.

The opening establishes that this guy is doing repairs on a rich family’s home and his interactions with each family member. But it also shows why he’s so desperate for money that he’d pull an asshole move like robbing their safe. He tells a crime boss (Robert Wisdom) that he’s the only guy that can get into that safe, but I think it’s a lie. He just has a little box he can use to listen to the clicks as he spins the dial – I feel confident that I could figure out how to use that thing if you gave me a couple minutes. But maybe he’s the only guy with one of those boxes, that’s why he said it. And because he knows the code to turn off the alarm. 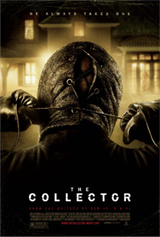 The family’s supposed to be on vacation but he hears something while he’s in there, and it turns out to be The Collector, a guy in kind of a hybrid lucha libre/S&M mask who is currently torturing the family members. Not only that but he set up a bunch of booby traps. Some of them are little things like a needle that pokes our guy in the ear when he tries to use the phone, or razor blades that slice his fingers when he reaches for the window. But also there are tripwires all over the place that set off ridiculously elaborate traps. You know how the FRIDAY THE 13TH sequels established the rule that killers can catch up to their victims without running? I guess SAW set the precedent that killers are engineering geniuses with the ability to foresee and set up for any outcome.

The traps are increasingly ridiculous. By the time I noticed a bunch of bear traps on the floor in the background of a shot I was laughing, well before a guy fell onto about 8 or 9 of them. The silliest one somehow uses a cable to swing a girl across the room and stick her on a bunch of wall spikes like she’s one of those velcro balls you throw against a target.

Meanwhile The Collector has people tied up so he can pull out tongues and teeth and what not. As you know I don’t really like the torture movies, not for moral reasons but because I think it’s uncinematic. The thrill of the slasher movie is in the chase, in just barely getting away. The “kills” are enjoyable exclamation points on the end of some of the sentences. A torture scene is a long, dragged out exclamation point. An elipses. It can serve its purpose but in this case it doesn’t, it’s not really a scene you dread getting to. You just don’t enjoy getting through it.

The predicament that the safecracker is in is interesting – the family members see him there and he says “It’s okay, it’s just me!”, but of course they gotta be wondering what the hell he’s doing in their house. He’s gonna get himself in trouble, but he’s a good enough person that he stays and tries to help them. And when the dad tells him the combination to the safe so he can get the handgun he says, “Okay” and not”I don’t need the combo, I have a special box for listening to the clicks,” so you know he’s a sophisticated criminal.

I like the setup , the character is developed enough to root for and we can all related to a safecracker in trouble. An everyman. But this Collector guy is a different story. That guy’s just lame.

SPOILERS? I’m not sure if this even counts as a spoiler, because it doesn’t really matter who the killer turns out to be, it has no consequences. But as you suspect early on he’s a pest control guy working on the property. It’s kind of cool that the killer knew the alarm code for the same reason our protagonist did – he works there. But the director uses his profession as an excuse to linger on CGI spiders and wasps on the outskirts of events, which is laughable whenever it happens. At one point it shows a spider watching, and moving his mandibles. Somebody oughta dub in a “CHAOS REIGNS!”

I liked in BATMAN BEGINS and THE DARK KNIGHT how the title came up at the very end. It’s kind of cocky to do it that way, like fuck you, I put the title on the end, I don’t care what anybody else does, but it’s an earned cockiness. Also, in both cases you realize the meaning of the title when it appears. Ah ha, so we’ve been through all this, now BATMAN BEGINS. Or okay, “Gotham’s White Knight” has slipped up, Batman’s gonna take the fall, only now is he THE DARK KNIGHT. With THE COLLECTOR what you realize as the title comes up is “Oh, they’re trying to do a series of these, like SAW.” They’ve shown us a killer and an M.O., they’ve even left the protagonist alive. I still think it’s novel that the SAW movies keep different characters alive and expect you to remember what’s going on from sequel to sequel, but I don’t want to see another series like that. Come on. It seems a little presumptuous to end that way.

Well, it turns out this was originally written as a SAW prequel, but then even the people who make the SAW movies didn’t want to see a fucking SAW prequel, so they rejiggered it into this. Man, I hope there aren’t a dozen rejected SAW sequel scripts that are gonna be turned into separate movies the way so many rejected DIE HARDs and LETHAL WEAPONs and stuff did. The people responsible for this one apparently did the FEAST movies and some of the SAW sequels, if that tells you anything.

Anyway, a semi-valiant attempt I guess. At least it had a good setup and a couple laughs. But I don’t recommend it. If you must, I guess it’s available exclusively at Blockbuster now (man, what a coup) and everywhere else April 6th.

This entry was posted on Thursday, March 11th, 2010 at 2:46 pm and is filed under Horror, Reviews. You can follow any responses to this entry through the RSS 2.0 feed. You can skip to the end and leave a response. Pinging is currently not allowed.

102 Responses to “The Collector”