I have to admit I don’t really get the Boondock Saints. Haven’t seen it since it first hit video, but I remember it just being kind of a shitty Guy Ritchie/post-Tarantino wannabe tough guy movie. It just seemed delusionally confident about how cool it was. It probly had some good bits here or possibly there, but it mostly seemed to me like some guys saying unconvincing macho lines and then some techno music comes on and the camera rotates around. It’s like an applause sign lights up that just says “AWESOME!” on it and you’re supposed to take its word for it. 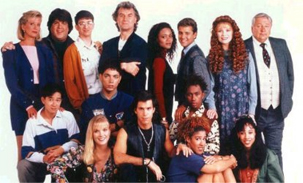 Okay, I know, that’s strictly an American point of view. In his homeland Billy Connolly’s not known for the declining year of a cheesy ’80s sitcom, he’s known as a standup comedian. So it’s totally different. He’s not a sitcom teacher, he’s this guy: 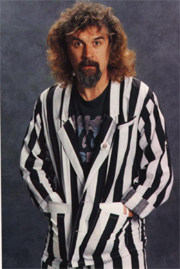 See, he’s not Howard Hesseman. He’s Howie Mandel. Now he’s old and grey and bearded, he looks like a homeless guy dressed up as Neo, and that’s what the movie has to offer as the ultimate badass. Also, he has a huge tattoo of a butterfly on his hand. (or is that supposed to be a re-entry stamp?)

I don’t get it. Nothing against Connolly, he’s a likable actor, and maybe his standup is good. But this character is a good metaphor for the movie. He clearly thinks he looks cool as hell. He must know something we don’t?

I’ve seen worse action/crime movies than BOONDOCK SAINTS, but mostly I’ve seen better. So it almost seemed like some kind of vindication when I saw that documentary OVERNIGHT and found out BOONDOCK writer/director Troy Duffy is a Guinness Book of World Records worthy asshole. The Weinsteins bought his screenplay and plucked him from bartending to become their new wonderboy, and he decided the next day that he was Francis Ford Coppolla multiplied by Stanley Kubrick divided by all of the Rolling Stones. He was such an impossibly arrogant shitbag that even the Weinsteins had to disavow him like a CIA assassin that blew his cover overseas.

Not only is OVERNIGHT a good cautionary tale, it’s also a hilarious movie full of some of the greatest poser tough guy talk ever captured on film. If anything that’s the beloved character I’m excited to have back on screen: that hilarious asshole Troy Duffy. So I was pleased to see he has a couple gems on the behind the scenes featurettes for part 2. I wish I had time to listen to his 2 (two) commentary tracks. 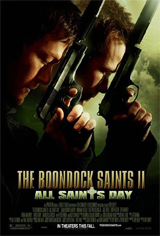 Honestly I have no clue. It’s hard to say because I saw the movie about ten years ago and since then have experienced these characters and stories only through the medium of hoodie. 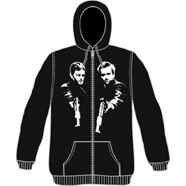 The point is they now have American Taliban beards and live in a quaint little cottage in Ireland with their dad (Billy Connolly, who I thought was Scottish). But back in Boston some dude killed a priest and put pennies on his eyes, so everybody thinks the Boondock Saints did it (were they priest murderers in the first one? I don’t remember that). They know it’s a trap but they go back anyway and kill the people involved while saying prayers and stuff.

(anybody know what this Catholic assassin business is all about? Is it supposed to be a critique of perceived hypocrisy on Catholic theology? or is it just supposed to make it aaaaweeeesome for Catholics to watch? I don’t really get this part either.)

Judd Nelson, imitating Al Pacino, plays a crime boss who mostly hides inside a panic room and talks over closed circuit TV (kind of a cool idea). I liked when he was yelling at everybody and used the word “reconnoiter.” Julie Benz from RAMBO and PUNISHER: WAR ZONE replaces Willem Dafoe as an FBI agent on their tail. She does a Southern accent ten times worse than their Irish accents, and I don’t understand why. The only time it seems relevant that she’s from the South is one part where she says some folksy thing about a pig. (You know how Southern people are, they say cute things like “y’all are as clumsy as a cow playin marbles” or “He’s like a sheep confusing Dale Earnhardt, Jr. for Hank Williams, Sr.”) But I figure if she has to do the accent then you get a different actress; if it has to be this actress then you don’t make her do the accent. Should be pretty easy. If he just picked one of those two things it would’ve worked.

Poor Clifton Collins Jr. becomes the comic relief sidekick. Apparently he’s friends with Duffy, so I’m sure he wanted to do it and had fun. But I still feel sorry for him being in this and CRANK 2 in the same year. And those were probly seen by ten times as many people as saw him in EXTRACT. But oh well, he generally rises above the movies, he’s pretty likable.

Meanwhile the dad sits home in the little cottage staring at various objects that can segue into flashbacks about his old timey GODFATHER PART II childhood. Since the filmatist is an egomaniac making a movie for worshipful fans I knew there was a very good chance that this would not turn out to have any significance at all, it could just be that he figures everybody loves this character and wants to know some background. Fortunately it turns out to be leading to the climax of the movie (where the dad leaves the house) but along the way Duffy manages to show us the making of the leather vest with the holsters on the front that he looked so “cool” wearing in the first movie. Because that was important to know.

Then there is a HUGE surprise where the FBI agent admits she’s assigned to help them, not catch them (SPOILER). But these other cops who I guess were in the first one who I guess are also helping them get away with their murders don’t know that she knows that they’re in on it so they all go to a bar and squirt water on each other and laugh and say “You mean you knew all along?” I don’t really get this part either, why we watched the whole section of the story before this which is now meaningless. Whoops.

Okay, the story makes no sense (just wait until you get to the “mindblowing” cliffhanger ending) but it’s supposed to be a goofy action movie, let’s just look at the action scenes. The good news is Duffy’s stuck in the ’90s, so there’s none of the shakycam or Michael Bay/Tony Scott editing. The bad news is that the Boondock Saints have some kind of magic gun powers where almost all of the gun battles go exactly the same: Boondock Saints stand stationary next to each other firing in one direction, 5-10 bad guys stand across the room firing back at them, Boondock Saints hit all of the bad guys, bad guys do not hit any of the Boondock Saints. Sometimes they play a little trick to set up the bad guys (they make a guy strip to his bikini and shit his pants and then leave him on a cart with a message painted on his back) just so they can then say “You’re fucked!” and wait for them to turn around and aim all of their weapons and then they use their magic gun powers to defeat them. (I’d skip the pants-shitting part and just sneak up behind them. But I’m not Catholic.)

Another thing is it actually has a couple bullet-time-esque camera rotations. In the year 2009. So adorable.

At the end poor Peter Fonda shows up, apparently having burned through his check from GHOST RIDER. By this time I had lost track/interest of who he was supposed to be, but I learned from the DVD extras that he’s called “The Roman” and that Duffy thinks the audience will be “filled with righteous anger” toward him when he shows up but then when he starts talking we’re almost won over by him. So yes, if you were wondering, Troy Duffy has seen KILL BILL VOLUME 2.

I guess the heart of this movie would be the dream sequence where a character who apparently was their sidekick who died in the first one, although he doesn’t look familiar to me at all, appears to them in a dream to make a big speech about how they are not being macho enough. He appears in a hockey rink and on a roof talking about how “these are hard men, doing hard things, and it gives me a hard on.” It made me a little embarrassed to have a dick, but Duffy explains on the featurette that “in my opinion it became a manifesto” for blue collar men who have never had a chance to be represented in movies before, not even in the movie BLUE COLLAR. Or PAUL BLART IS: MALL COP. In the manifesto the longhair talks about how real men don’t cry, so it’s ironic that Duffy wipes a tear away while talking about what a powerful and important scene he created.

So no, I would not consider this to be any better than part 1, although I guess I got a little more of a kick out of it because it’s even further off the mark. On the other hand, it tries to be more nudge-nudge, wink-wink, with the characters talking about being “the sidekick,” coming up with catch phrases, trying to think of “creative” ways to attack, and in that sense it’s kind of more tedious. Unfortunately I can’t give Boondock Saintheads any advice because I have no clue if this will seem good to them or not. The only evidence I have is: one guy I never heard of gave it a positive review and gave away tickets to two screenings of it on Ain’t It Cool (and is quoted on the ad). Otherwise I’ve heard that fans were disappointed.

So you can’t learn much from this review, but maybe I can learn something from it. Here is a summary of a few of the things I don’t get:

Clifton Collins Jr. Judd Nelson Peter Fonda Troy Duffy
This entry was posted on Wednesday, March 10th, 2010 at 12:42 am and is filed under Action, Reviews. You can follow any responses to this entry through the RSS 2.0 feed. You can skip to the end and leave a response. Pinging is currently not allowed.