I have to admit I don’t really get the Boondock Saints. Haven’t seen it since it first hit video, but I remember it just being kind of a shitty Guy Ritchie/post-Tarantino wannabe tough guy movie. It just seemed delusionally confident about how cool it was. It probly had some good bits here or possibly there, but it mostly seemed to me like some guys saying unconvincing macho lines and then some techno music comes on and the camera rotates around. It’s like an applause sign lights up that just says “AWESOME!” on it and you’re supposed to take its word for it. END_OF_DOCUMENT_TOKEN_TO_BE_REPLACED 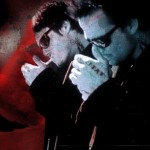 (or DUFFY: A PRICK AND HIS DREAM)

A few years back I used to always hear about this movie THE BOONDOCK SAINTS. Some kid told me his brother saw it in Boston and it was the shit, he was trying to find it on video but it wasn’t out yet. People kept mentioning it, and after it came out pretty much straight to video (it played in 5 theaters apparently) a couple people e-mailed me and recommended it.

I felt bad though because here these people are trying to be nice and recommend this movie they think I will like, and I hated the fuckin thing. Maybe there was one or two clever sequences, I can’t remember much, but my main impression was that it was another corny showoff movie with no heart or soul, just a bunch of unconvincing tough guy bullshit and show-offy camera moves. Looks like the general consensus was it was a Tarantino wannabe but I remember I was definitely leaning toward Guy Ritchie. More of that hollow and forced nonsense that wafted off the ass of LOCK, STOCK AND TWO SMOKING BARRELS during its short window of popularity. END_OF_DOCUMENT_TOKEN_TO_BE_REPLACED