To tell you the truth it was the Lee Marvin/Don Siegel version of this Ernest Hemingway story that I was interested in, but Criterion released the two versions together, so I watched this Robert Siodmak/Burt Lancaster one first. Way to go, Criterion – expanding my ignorant horizons.

This is one of those movies I wasn’t sure about watching but then the opening was so great it could’ve turned into a round table discussion of agriculture subsidies and I probly would’ve kept with it. It starts with two out of town assholes walking into a diner and giving the proprietor a bunch of shit. They sit there in their coats and fedoras, ridiculing the menu, the policies, the customers, keep calling everybody “bright boy” and ask them condescending questions. It soon comes out that they’re not there for the steak sandwiches, they’re hired killers waiting for “the Swede” (Lancaster) who works at the gas station across the street to come in for lunch so they can ply their trade on him. (That means kill him. They are killers.)

He doesn’t show up, though, so the killers leave, and the “bright boy” customer who happens to work with Swede races to his house to warn him. But the Swede already knows, and he just lays in bed, resigned to his fate. So they show up and kill him. 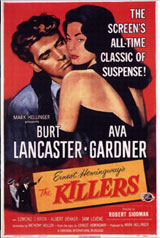 So there’s your hook, there’s your mystery. Who had him killed, and why? We would ask the Swede, he obviously knew the answer, but the whole thing is he’s dead, so that doesn’t work. The movie follows a smart insurance investigator named Jim Reardon (Edmond O’Brien) who figures out there’s some unrecovered job money involved in this and won’t let go of the case. He talks to the Swede’s co-workers, the old woman he left his insurance money to (a chambermaid he barely knew), the officer who arrested him once (also a childhood friend), one of his old girlfriends (the officer’s wife), his cellmate. They all tell stories about Swede and a picture starts to come together of a boxer who couldn’t fight anymore and fell into crime. Then Reardon starts to find clues about the Swede’s last heist, who was involved and what might’ve gone wrong. And he goes after the money.

Ava Gardner plays the girl whose charms Swede can’t resist, makes him put his brain on standby and switch over to “dick” mode. She doesn’t seem like a terrible person, but I guess technically she’s still a femme fatale, because she’s laying on a bed as bait while the men convince Swede to come in on a payroll robbery. She’s kicking her pantyhosed feet around like a kitten pawing at a ball of yarn. She knows what she’s doing.

She’s actually pretty smart about finding excuses to just be laying around all the time, so men don’t have to imagine what she looks like horizontally. It’s pretty over the top but at least she’s not bending over to pick things up or doing the Sharon Stone leg-spread or anything like that. I wonder if she had to do any furniture re-arranging though?

“Well, see you later Kitty, we have that hat factory payroll robbery to plan.” 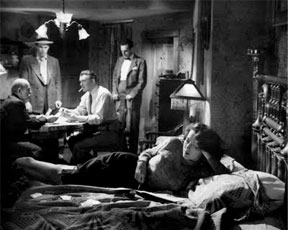 “No, stay here, you guys can meet in my bedroom.”

“Well, that would be weird. Not enough room in there. Besides, we were gonna go play cards at Colfax’s, that’s a good place.”

“Well, is there a bed I can move into the living room?”

Come to think of it, the Swede chooses to face his maker laying in bed, it might be an homage to Kitty. Or this might just be a movie about beautiful lazy people.

The cinematography is real good, very film noir. One of the extras on the DVD says it just looks like TV, but man I didn’t think so. Subtle things like when they’re at the coroner’s office and the room is bright so there’s a light background, but the light’s not on the people so they’re a dark grey. It looks good and very moody, not your usual shine-a-light-on-the-actors-and-shoot-them approach.

Apparently Richard Brooks and John Huston worked on the script, but it’s credited to this guy Anthony Veiller. I guess the opening 20 minutes comes straight from Hemingway’s story and the rest is made up. It’s a good mystery, even if it never matches the strong mood of that opening scene, with those guys talking down to everyone because they know nobody’s gonna mess with The Killers.

But it ends on a fun note. I like how it’s not a cop or private eye on the case, or even a guy who needs to solve the mystery. In fact, Reardon’s boss doesn’t care what happened and tries to move him on to something else. He just becomes obsessed, it’s like a puzzle to him and he doesn’t want to give up on solving it. When he finally has it all figured out, having gone far beyond the call of duty, he goes home for the weekend. Then he’ll be back Monday for some other case.

Ava Gardner Burt Lancaster Edmond O'Brien Ernest Hemingway film noir Robert Siodmak
This entry was posted on Monday, November 23rd, 2009 at 12:59 pm and is filed under Crime, Mystery, Reviews. You can follow any responses to this entry through the RSS 2.0 feed. You can skip to the end and leave a response. Pinging is currently not allowed.