Class room discussions usually have some bearing on the horror that’s gonna happen later, either in explaining the mythology or setting up some kind of ironic parallel (see the works of Wes Craven for examples). Here the professor (who’s wearing a big crucifix like 50 Cent) gets the students talking about what’s missing in their lives, how they’ve lost track of their “roots,” and debating whether that means they need to

a) find religion or

b) get in touch with the earth or whatever.

The girl actually brings up the letter she got from her friend and how he lives in the woods and it’s awesome, which pisses off her boyfriend and they get in a big fight. The fight continues at a party and next thing you know she’s broken up with her boyfriend and heading to the friend’s Unabomber shack with her friend who newly-ex-boyfriend thinks is trying to get down her pants. They drive all night and stop in a small town and then stop at one of these small town general stores that you stop at in a movie before you go off into the woods and get yourself into trouble. The nice old guy that runs the store (Rudy Vallee, credited as “Special Guest Star” on the opening credits and “The Proprietor” on the end credits) sings them a song, tells them he’s a radio pioneer, gives them his favorite licorice from Culver City, begs them to not go into the woods and when they won’t listen tries to sell them a hunting knife for protection ($14.95). Definitely the best scene in the movie. 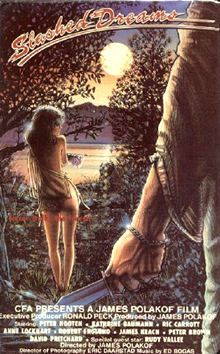 Okay, let’s stop here a moment and gather our thoughts. This is all pretty generic post FRIDAY THE 13TH slasher business. One thing that’s unusual is that The Proprietor plays the role of the crazy guy that warns the kids, like the drunk in the cemetery in TEXAS CHAIN SAW or Crazy Ralph in FRIDAY THE 13TH. But he’s not crazy or drunk, he’s just a nice old guy, so that’s a refreshing change. Another one is all that hippie dippie talk at the beginning. In most slasher movies the kids are going out to the woods to fuck around and have good time, drink beer and smoke weed, etc. Or at best they’re going there for a summer job, but will also try to fit in that other stuff. This is the only one I know of where they go up to the woods “looking for meaning.” It’s the part of the ’70s that still remembers the ’60s instead of the part that looks forward to the ’80s.

So there’s a couple good tweaks and we can see where the ol’ slasher formula is going: somebody’s gonna attack her in the woods, and there are a half dozen suspects:

1. the asshole ex-boyfriend
2. the old friend who lives in the woods, maybe he’s gone crazy from the isolation out there, or maybe he was crazy in the first place and that’s why he went out there and also why he lured her there with his letter. This theory seems especially plausible once we see him and realize he’s played by Robert Englund
3. this Bradley Cooper looking friend of hers, maybe the ex was right and he has ulterior motives and more
4. some other person that Rudy Vallee was trying to warn them about
5. Rudy Vallee, ’cause he went crazy after the age of radio ended
6. the bear that was snooping around their camp site

So this should be good, I’m up for this, this is the kind of thing I’m looking for. Kind of odd, though. There doesn’t seem to be much foreshadowing here, much tension being set up. For the first half of the movie there’s just lots of frolicking in the sun, hiking, skinnydipping, giggling. Which is normal for a slasher movie ’cause they have somebody get killed at the beginning so you know there’s a threat out there, and then there’s ominous music ironically undercutting the happy imagery. And some tension with the locals, who obviously don’t think they belong, and the kids trespass or offend them in some way. And if they don’t show a mysterious person spying on them from afar then they at least have shots from far away that seem like P.O.V. shots of somebody spying on them. A visual implication that they’re not alone.

But this movie has none of those things. Just kids having fun, and some pretty folk music. That’s weird, that’s not very FRIDAY THE 13TH.

You know what else is weird, this came out in 1975, that’s 5 years before FRIDAY THE 13TH, 3 years before HALLOWEEN, the next year after TEXAS CHAIN SAW. So come to think of it there wasn’t really a slasher movie formula existing at that time for this movie to be messing with.

Oh shit, why didn’t I see this before? There was something else odd about 2 seconds in, when the title came onscreen in a weird rectangle: 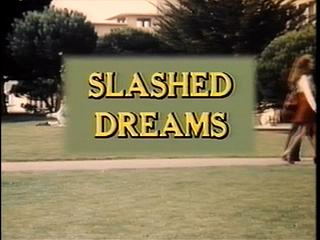 That’s ’cause it had to cover up the original title, which was SUNBURST. And SUNBURST doesn’t sound like a slasher movie because this isn’t a slasher movie. The cover looks like a great FRIDAY THE 13TH ripoff, but that must’ve been made much later to lure in suckers like me. If the actual movie was trying to rip anything off it was DELIVERANCE. Halfway through our couple are briefly menaced by two rednecks who run in and pin them down but chicken out before raping the girl. The next day the rednecks are arguing about whether or not to come back and try again when the one guy finds them and has a little scuffle with his small ax vs. the headband-wearing guy’s knife.

That’s about it. The girl cries for a long time. Robert Englund shows up and tries to comfort her by making tea out of some leaves he picked. He basically tells her to just get over it (but does not resort to “Come on lady, they didn’t even actually rape you, and your boyfriend here got way more of a beating and you don’t see him moping around.”)

Weirdly he lives out here in the middle of nowhere, miles away from any human life, these two rednecks seem to think they own the area because they talk about “poachers,” but he doesn’t know them and vice versa. He knows how they think though because when they run away he confidently states “They’re gone now. They won’t come back.”

I would not recommend this one to anybody. Whatever type of soul-searching philosophical romance it was supposed to be I don’t think it succeeds, and it’s even worse as a slasher movie. The one big thrill is when they wake up and a bear is there. I mean, nothing happens, but they filmed a real bear a few feet away from the real actors. That’s production value.

I’d like to think there’s some kind of subtext about race going on here, because Rudy Vallee talks about Amos ‘n Andy, and later the boy tells the girl “you look like you’re Al Jolson” when she gets berries on her face. I mean, it’s weird to have two separate references to blackface performers, isn’t it? But I don’t see any context where it could mean anything.

I didn’t notice that the girl’s friend was Anne Lockhart, who was also in YOUNG WARRIORS. One of the rednecks is played by James Keach, co-writer of the movie, brother of Stacy Keach and husband of Jane Seymour. Director James Polakof later directed BALBOA starring Tony Curtis. But not ROCKY BALBOA, he had nothing to do with that one.

rednecks Robert Englund Rudy Vallee Slasher Search
This entry was posted on Wednesday, October 12th, 2011 at 1:00 am and is filed under Drama, Reviews. You can follow any responses to this entry through the RSS 2.0 feed. You can skip to the end and leave a response. Pinging is currently not allowed.