I gave CRANK two tries. I really wanted to like the movie, but I sort of hated it. I had a hard time getting past the hyperactive editing and camerawork – Jason Statham would do these things that should be exciting but the directors, “Neveldine/Taylor,” were hammering me over the head so hard with all their visual tricks that it just seemed boring. I honestly fell asleep the first time I saw it and missed that charming moment where he causes an innocent cab driver to be lynched by pointing at him and yelling “Al Quaeda!” on a crowded street.

And that’s maybe a bigger problem I had: the overall douchebaggy attitude of it, the Marilyn Manson going door-to-door trying to shock people approach to humor. Ha ha, he said something racist, you’re not supposed to do that. Oooh, he raped his girlfriend in front of a bus of Japanese school girls and they took pictures, what a fun time at the movies. (NOTE: I have been informed it’s not rape because she eventually liked it, like in STRAW DOGS.)

But I mean, beneath all that bullshit I can’t deny that there’s some kind of charm to it. I like how absurd it is, the premise of this guy who was poisoned and he has to run around kicking ass to keep his heart rate up so he can live long enough to get revenge.

And it’s full of funny ideas, like him strangling a guy as they fall out of a helicopter, and also leaving a voicemail for his girlfriend while he plummets to his death. The Ain’t It Cool talkbackers kept trying to convince me it was good, so I watched it again, hoping I would change my mind. I even made this dumb “Vern’s Appeals Process” logo and I was gonna try to watch popular movies that I didn’t like years ago, like this and maybe NATURAL BORN KILLERS or something, and I’d see if they would grow on me. But CRANK didn’t.

Now in certain circles they’re talking up CRANK: HIGH VOLTAGE even more. I was real curious but I wasn’t about to pay to see it in a theater. But today it came out on the DVD. 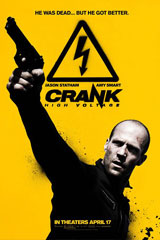 I guess I would say it’s a little better, and more enlightened. This time the public sex with his girfriend is consensual. A step in the right direction, although he does ass rape some guy with a shotgun. (Get it? Ass rape.) And as far as I could tell it wasn’t even a real bad guy, just a dude he needed information out of. But to be fair I thought it was hilarious in PUNISHER WAR ZONE that he actually fired missiles at mere drug couriers, so I guess I can’t be too hard on Statham’s character, who by the way has one of those stupid sounding character names, like Desolation Williams in GHOSTS OF MARS, that I can only assume were put into the script as a placeholder or ‘find and replace’ typo mishap and then actually put on film by some kind of impossible-to-predict chain of  coincidence and incompetence. So I won’t say the name in this review. To me he’s Detective John Crank.

The camera is still spinning around too much (and this time shot on handheld consumer level camcorders like your nephew’s birthday video) but somehow I was okay with the style this time. Don’t know if it’s more coherent or if I’m just getting used to it. The hyperactive music by Mike Patton really fits the movie well and maybe helped get me into the mood for it, I don’t know.

There are several amusing gimmicks, like a talk show/childhood flashback and a scene where Statham and some guy he’s fighting wear rubber suits of themselves so they can fight like Gargantuas. There’s a shootout in a strip club that causes a stripper’s implants to leak. And the bad guy puts cigarette ashes on Chev’s heart while he’s getting surgery. And spits a loogie on it. That kind of stuff.

Instead of a poison this time his problem is that his heart has been stolen and replaced with a shitty artificial one with a battery that keeps running out or getting stolen. So he has to tase himself or touch a high voltage box to stay alive. It’s an even more absurd premise than the first one, and I can get behind that. Even aside from the whole artificial heart thing I think it’s funny that his heart is so powerful and legendary that the villains treat it like the Lost Ark. Also they’re planning to steal his dick but fortunately that doesn’t get mentioned much.

Even though I don’t really like these movies I gotta give Statham some credit for them. He doesn’t get to do elaborate fights like in the TRANSPORTERs, but it’s a very physical performance, even his posture is impressive, and he’s running around doing all kinds of crazy shit. I’m pretty sure in this one they really dragged him off the back of a speed boat, that was a good scene. I also like that he plays it 100% serious. That’s one thing it’s got over a Michael Bay movie – even though it’s trying too hard to be funny at least he’s not cracking a bunch of fuckin jokes. He acts like he thinks he’s still in THE BANK JOB or something.

I don’t think this means Nevildine/Taylor are racist, I think this is one of those things where it’s “ha ha ha, it’s so racist, can you believe we put that in there? ha ha, it’s so terrible!” which is in a way is worse because that means they know better.

There’s a making-of thing on the DVD where they keep talking about how they couldn’t believe they “got away with it” and that’s why it was so great because the studio must not have read the script because there was no way they would want to make that movie, etc. You could say something like that if you made a really subversive movie that would challenge the way people think, but in this case it just means they made a movie where a guy dry humps an old lady and farts when some gay guys shock him with an electric dog collar and then at the end he catches on CGI fire and flips off the camera. Whooooahhhh, I cannot believe we got away with that. Fighting the system from the inside, dude.

I don’t know if it’s fair, but I get a bad impression of these Nevildine/Taylor jokers. Let me explain how I see them. I saw a quote on the Wikipedia page for Dave Chappelle, attributed to an article from the Sacramento Bee. Apparently Chappelle was doing standup in 2004 and dipshits in the audience kept yelling “I’m Rick James, bitch!” and shit like that from his TV show. He got so annoyed he left the stage for a while, but when he came back out he said, “You know why my show is good? Because the network officials say you’re not smart enough to get what I’m doing, and every day I fight for you. I tell them how smart you are. Turns out, I was wrong. You people are stupid.”

What does that have to do with CRANK: HIGH VOLTAGE? Let me point you to the scene where Dwight Yoakam tells his black girlfriend/assistant/ho to go do something for him and when she asks why he says, “Is Doc Miles gonna have to choke a bitch?” It’s a reference to the great Chappelle’s Show sketch where Wayne Brady asked the same question. The joke in the sketch is sort of a riff on TRAINING DAY. The laugh comes from this clean cut day time talk show host turning out to actually be a fuckin psycho, and from the discomfort of Chappelle being stuck in a car with him and not knowing how to get out of the situation. It’s not supposed to be cool that Wayne Brady is a pimp, it’s supposed to be fucked up. The joke is oh shit, the guy I’m getting a ride from is threatening to strangle a whore. In CRANK 2 the joke is ha ha, pimps are funny, Chappelle’s Show is funny. I’m Rick James bitch! I’m Rick James bitch! L’il Jon. Hwhhhuuuttt? Ha ha ha ha. It’s funny when you say bitch. Stupid bitch. Ha ha. Choke a bitch. Hwhhhuuuuttt?

What I am proposing is that Neveldine/Taylor are personally responsible for Dave Chappelle quitting his show, running off to South Africa for a while and going into semi-retirement.

But you know what, I’m not gonna go out on some negativity. Just as I give Statham credit for his performance as John Crank I will give some credit to these two bozos. It’s not illegal to be a douche, and they are a couple of somewhat talented douches. These two movies do stand out from the pack, they are their own thing, and I feel like I get why somebody would like them. 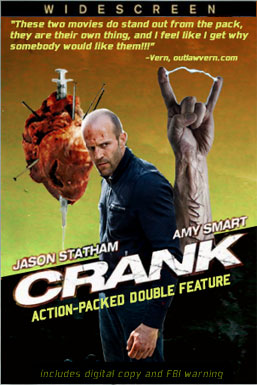 Jason Statham Neveldine/Taylor
This entry was posted on Tuesday, September 8th, 2009 at 7:07 pm and is filed under Action, Reviews. You can follow any responses to this entry through the RSS 2.0 feed. You can skip to the end and leave a response. Pinging is currently not allowed.