I mean seriously.  Look at that picture. Squint. Take your glasses off. Stand across the room. Is there any way that would fool you? Would you even notice he was supposed to be black? I don’t get it, man. If anything he looks like an Indian guy with a perm. I mean, he could pass for not white, but I don’t think he could passing for black. He couldn’t pass for passing black, in other words. You really gotta suspend the ol’ disbelief on this one. 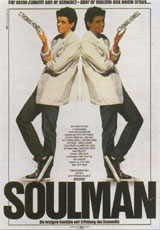 But it’s not as offensive as I thought it would be. Clueless, yes, but well meaning at least. Here is a numbered list of items:

1. They don’t pull some shit where you’re supposed to think he deserves the scholarship and that it’s not fair to be only available to black students. He’s clearly a dumbass. His rich dad decided not to pay his way, he had been bad about paying bills, so he had no money and came up with this stupid scheme.

2. He mostly doesn’t try to imitate any stereotypes. No accent, no juive talk, no jokes about rhythm. He’s just a sweater-wearing suburban dork like himself, except “black.”

3. To be extra safe they make sure you don’t think it’s blackface. He supposedly uses an overdose of experimental tanning pills. The hair is never addressed and you never see him maintaining the look. He also doesn’t wear terrifying hell contacts like the Wayans brothers when they played WHITE CHICKS.

Most of the racial humor actually comes out of white people being dumb. There are jokes about a white girl using black men for sex and basketball team captains (one played by Ron Reagan) fighting over who gets C. Thomas on their team (big mistake). In one of the few scenes really dealing with stereotypes the white girl’s dad (Leslie Nielsen) imagines Mark as a cursing, watermelon-eating pimp. It’s clear that only a real asshole would think this, even if it’s played for laughs. Nielsen’s son fantasizes about Mark as Purple Rain-era Prince, the idea maybe being that the younger generation are becoming more comfortable with black people because of music. An accurate point, it turns out.

And at the end it definitely comes out in favor of affirmative action. He realizes how worthy Rae Dawn would be of that scholarship. He tries to atone for his lies partly by giving a percentage of all future earnings to a scholarship for African-Americans. The movie also comes out clearly in favor of interracial relationships. So in that sense it’s more progressive than JUNGLE FEVER. The soundtrack’s not as good, though.

Despite all that, it’s hard to take. His dorky best friend (who I mistook for the dorky best friend from TEEN WOLF) makes a smarmy trial speech arguing that society made Mark do it. He talks about him being a victim and the class are supposed to picture this poor black dude and then he walks in and it’s regular lilly-white C. Thomas Howell and they go “wh-wh-WHUT!?” It’s the most unintentionally racially insensitive summation speech until A TIME TO KILL. Maybe that’s where they got the idea.

And then it’s pretty painful how much he gets away with it. I mean, he obviously feels bad. He tries to make reparations, even using the word reparations. He makes it very clear that he knows this hasn’t really shown him how it feels to be black (although he did experience racial profiling, some dicks in preppy sweaters making racist jokes and Leslie Nielsen punching him in the stomach, all things African-Americans have to contend with on a dialy basis). But still, I just can’t buy Rae Dawn and James Earl forgiving him so quick.

I mean, if this guy wears a disguise to trick you about his race, that’s pretty fuckin bizarre. And if he did it to steal a scholarship? I mean, I don’t think you would talk to that guy again. That would be too uncomfortable. James Earl seems almost impressed by it, and Rae Dawn gets over it in a day or less. I don’t think it fits their characters. I’m not saying they would kill him when they found out, like Brandon Teena, but they would think he was a real bastard.

I guess it would go down better if the movie gave him more of a race struggle. It’s obviously supposed to have kind of an eye opening effect for him, in the tradition of BLACK LIKE ME, WATERMELON MAN, etc. But it ends up being more like JUST ONE OF THE GUYS, it’s just about him sneaking around and trying to not get caught. The worst part is the forced climax where his parents, the girl who wants to sleep with him and Rae Dawn Chong all show up at the same time and he has to run back and forth between them trying to make sure they don’t know about each other. He wears a ski mask so his parents won’t see his disguise, then when they see him without it they think he’s a black guy trying to rob them. (A black guy who looks like an Indian with a perm.) So he uses ebonics and runs away. All kinds of THREE’S COMPANY style misunderstandings.

I think if people really for some reason believed he was black he would have a little more to deal with. Like what would have happened if he got into a debate about affirmative action? That would be pretty uncomfortable, him having to defend it even though he got the scholarship unfairly. And that’s the kind of thing people were really debating on campus back then, I bet. They could also deal with white people being overly nice to him. Fortunately Scorsese later dealt with that in the extended cut of the Michael Jackson “Bad” video.

I wouldn’t suggest watching SOUL MAN. It’s not as offensive as I expected, but it’s not good either. Not insightful enough to be a good drama or satire, and not funny enough to be a good comedy. Although I admit it was kind of funny to watch such a long slow motion montage of C. Thomas Howell sucking at basketball.

You know, Barack Obama went to Harvard Law School starting in ’88, so assuming Mark continued his education as planned they may have crossed paths. As a former member of the black community I’m sure Mark was very proud to see Obama become the first African-American president of the Harvard Law Review.

C. Thomas Howell cheesy '80s comedies questionable racial politics Steve Miner
This entry was posted on Wednesday, August 26th, 2009 at 2:48 am and is filed under Comedy/Laffs, Reviews. You can follow any responses to this entry through the RSS 2.0 feed. You can leave a response, or trackback from your own site.