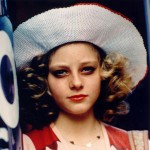 Since the director is Neil Jordan, and especially since it stars Jodie Foster, I kind of thought it was gonna be a pretentious “serious” take on the vigilante genre, maybe even condescending toward it, looking down on these types of movies and trying to do the respectable version of them. But thankfully the movie doesn’t have that feel, and if you check the publicity interviews on the DVD they all check out. Foster states that it is in fact a genre movie, and Neil Jordan drops names like Don Siegel and Sam Fuller. I guess I forgot Joel Silver was the producer, he’s not gonna get all fancy pants on us.

So what’s the twist, besides Charles Bronson is a lady? Well, I’m sure this must’ve been done before but I can’t off the top of my head think of a vigilante movie where the vigilante feels this bad about it. For example in DEATH WISH Charles Bronson’s character Paul Kersey feels so good about shooting people that he spruces up his apartment and listens to happy music and it freaks out his son-in-law who wonders “what do you have to be so high about?” Usually it takes a while to push them but the movie will stack the deck so that the bad guys are so bad and the system is so broken that you gotta applaud the Brave One’s brave activities. Here you definitely get the feeling she might be going too far. One incident in particular, some kids are bullying people on a subway, stealing iPods. One of them does pull a knife on her, but does she really need to kill them? Both of them? And does race play a role in it? It’s obviously meant to remind you of Bernard Goetz, and also of DEATH WISH, where Kersey sits in the same place on a subway, also gets a knife pulled on him by two African-Americans, and also shoots them both. But Kersey doesn’t feel bad about it. The Brave One does and admits that she could’ve just shown them the gun and they would’ve left.

There’s even a scene where she tries to turn herself in, but the police don’t know what she’s babbling about so she leaves. In a big city like New York and all the crazies they must deal with there I thought this was believable and kind of a scary thing to think about.

The movie does a good job of pushing her into this situation. Alot of times, like VIGILANTE or DEATH SENTENCE, the justice system is a failure so the hero immediately goes out to get a gun and kick ass. I guess they figure that’s not as natural for a woman to do so she falls into it partly by coincidence. After the hospital she’s traumatized, afraid to leave her apartment. When she does she’s terrified, thinks everyone is following her (another thing straight out of DEATH WISH). So she decides to get a gun, but without a license they won’t sell it to her. Another customer hears her conversation and outside offers to hook her up with an illegal gun. Later she’s in a convenience store when the clerk’s pissed off husband comes in and shoots her. So The Brave One ends up shooting this guy in legitimate self defense, but because the gun is unlicensed she takes the security tape and leaves. After that she doesn’t necessarily go looking for trouble like Paul Kersey does, but she makes no effort to avoid it. And if somebody fucks with her, even a little, they’re dead.

Jodie also develops a relationship with Terence Howard as a cop investigating the vigilante murders. But he thinks she’s just interviewing him for her show. She could take advantage of their friendship to try to avoid getting caught – instead she finds out about a rich asshole he hasn’t been able to bust and decides to show him some Brave One Justice. So that’s the DIRTY HARRY angle where the system makes a dangerous guy untouchable so the only thing to do is go outside the system.

For me the aspect that pushed it the most was her radio show. I liked the idea that she’s in love with NYC, and wanders its streets with a mic recording sounds. But when she’s on the air it’s pretty corny, especially when she takes callers. None of them sound real and it’s a clunky way to show the public response to the Brave One’s shenanigans.

After the shooting on the subway she lays on her bed and listens to a recording of it. Kind of a creepy thing to do. I figured this was heading to a Brian De Palma type situation where the recordings would become important. Most likely she would put together a crazy radio show about her murder spree, maybe get it played on the air as a confession, maybe after death. Even without that type of ending I figure it should be called N.P.R. – NATION PUBLIC REVENGE.

Between this one and DEATH SENTENCE, personally I’m more of a DEATH SENTENCE man. It’s more ridiculous and therefore more fun. It has some good action sequences. Neither one taught me anything I didn’t know about vigilantism, but I sorta dug the whole family vs. family theme of DEATH SENTENCE. And even though the bad guys are trying to be more real in THE BRAVE ONE they still feel like stereotypes. So you might as well have cartoons like in DEATH SENTENCE. Also I loved DEATH SENTENCE’s visual depiction of the vigilante and the criminal being the same at the end.

But THE BRAVE ONE is a pretty good take on the subject, a little more confined to the real world, so if that’s your style you might like it better. I think maybe its best point is about guns. Her decision to get that gun leads to everything else that happens in the movie. That’s not necessarily an anti-gun statement, because if she didn’t have the gun that guy in the convenience store probaly woulda killed her. But it shows that owning a gun also comes with the burden that you will have to live with yourself after you use it on someone.

On the other hand, if her cell phone didn’t ring that psycho wouldn’t have known she was there in the convenience store. So maybe it’s an anti-cell phone movie. I wonder who was calling her anyway? Probaly that friend of hers who she kind of abandons after these life changing events. I wonder if she ever told her? “You know, I don’t know if you remember this, but one time you called me and I didn’t answer? Well, I didn’t answer because I was hiding from a psychopath. So you kind of got me into some trouble there. Don’t worry, you didn’t get me killed, I killed the guy. You turned me into a killer. And it really changed my life, started this whole killing spree for me, fucked me up pretty bad. Anyway, I just want you to know I don’t blame you.”

vigilantes
This entry was posted on Saturday, February 23rd, 2008 at 10:30 am and is filed under Reviews, Thriller. You can follow any responses to this entry through the RSS 2.0 feed. You can leave a response, or trackback from your own site.