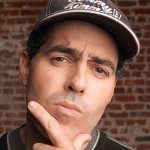 THE HAMMER is an independent comedy about boxing. It stars the talk radio host Adam Corolla as Jerry Ferro, a carpenter who on his fortieth birthday gets fired from his job and dumped by his girlfriend. He still has a job as a part time boxing instructor at a gym so he tries to pick up some more work there. Without trying he ends up catching the eye of a veteran trainer who gives him a longshot chance to take part in Olympic trials, something he failed at 20 years ago through his own laziness.

So you got your basic underdog story, a guy who has made nothing of his life taking a late shot at some kind of glory. A good inspirational tale for all us losers. If you only know Carolla from that show “The Man Show” he used to do you might think the premise is laughable, but in fact he was a boxing trainer (he met his partner Jimmy Kimmel because he was his coach). So yes there are jokes about him looking like a slob (one character asks him how he can be so skinny and so fat at the same time) but his skills appear authentic. It’s a comedy, it’s not at all a serious movie, but it’s the kind of comedy that takes place in something like the real world, not the cartoony kind like a Will Ferrell or Adam Sandler movie.

And to me I think that layer of authenticity is what makes it rise above the many other comedies that cover similar material. Carolla didn’t just say “What can we make a movie about? Boxing?” He made a movie based in what he knows, and he knows boxing. He also really was a carpenter so, weirdly enough, alot of the humor is based in his knowledge of carpentry. For example he gets himself into trouble when a big-shot boxer punches a heavy bag so hard it tears out of the ceiling. While the guy’s entourage kiss his ass Jerry points out that the bag was poorly attached, that toggle bolts should be used for things like humming bird feeders or wind chimes. Maybe he should’ve kept that to himself.

I was expecting filmatism on the cheesy side, but it’s not bad. The photography is kind of raw looking, it works well for the story. It does have the standard comedy mediocre rock soundtrack, but oh well. The conversations in the movie are obviously based around random things that Corolla likes to riff on (the La Brea tar pits, novelty candles, slow drivers, “going Dutch”) but that trick almost always works because he has alot of funny observations about those topics. It rarely feels forced.

If you look at the credits the movie is as much of an underdog as the character. The director is the guy who did KISSING JESSICA STEIN which I’m sure some people liked, but other than that his credits are things like LEGALLY BLONDE (tv pilot and sequel) and 2001’s THE FACTS OF LIFE REUNION. The story is by Carolla but the screenplay is by some guy who produces and appears on various sports shows. And then of course there’s the fact that it stars a talk radio guy, and it’s not even about talk radio. How many talk radio guys are gonna make good movie stars?

Well, for this movie it works perfectly. You don’t want to see a movie star in this role, not even a comedian. Carolla is this character, you believe him driving a shitty pickup truck with a hole from a pick axe making it hard to open the passenger side door. And the humor comes out of the character, the things he talks about, his smartass comebacks to people, and his universally relatable apathy and laziness. On the radio Carolla can say stupid shit sometimes but you don’t care because he’s funny, likable and self-deprecating enough to win you back. The character is the same way, he’s easy to root for.

I should mention that I only have one foot into the world of radio listening. In Seattle Howard Stern has never been the cultural phenomenon that he seems to be in other parts of the country, so I never got into him. We’re supposed to be a big radio town, but that’s because the traffic is terrible, so all those people who live out in the suburbs and work somewhere else need something to do during the percentage of their life they choose to spend on commuting. If you live in the city and ride the bus that’s just not a part of your life, you spend that time reading a book or staring out the window.

I do have a clock radio though so shit happens. I used to listen to Air America when we were hip deep in the Bush years and getting to experience this liberal media you hear so much about was kind of a lifeline. But I can’t listen to that anymore since they dumped or lost all their shows that had a sense of humor. The guy in the morning was very knowledgeable and I learned from listening to him, but getting disgusted about politics every morning when you wake up is bad for the soul. And I’m trying to lower my blood pressure. I remembered Adam Carolla from when he was on Loveline, so when I found out he had a morning show I set my radio to that.

I bring this up only to say that I am somewhat familiar with the things he talks about on his show, and with Oswaldo Castillo, his Nicaraguan buddy from the construction days who “reviews” movies on the show and is very funny playing his sidekick in the movie. It seems like people who listen to someone like Carolla start to feel like he’s their actual friend, so if you listen to that show alot I’m sure you’ll love the movie. But honestly I think maybe it will work better if you’ve never heard the show because his shtick will be brand new to you. Don’t worry, there’s no in-jokes, no “babba booey” or any shit like that.

THE HAMMER is a very likable underdog story, with many laughs big and small. Apparently it almost went straight to DVD, but Carolla put up the money himself to strike up prints and promote it. Like Dolemite would’ve done. I don’t know, it will be great on video, you don’t need to see it in Imax or anything. But I had a good time seeing it with a small, appreciative audience. It’s still in limited release, but if you live in California, NYC, Phoenix, Las Vegas, Portland, Salem or Washington state you should consider checking it out.

By the way, THE HAMMER has the following admirable qualities:

* No celebrity cameos, not even Ben Stiller or Will Ferrell
* The only ROCKY reference is a brief use of “Eye of the Tiger”
* The love story never slows the movie down
* It proves that people besides Judd Apatow can still make funny comedies sometimes

In conclusion, THE HAMMER is the best boxing movie since ROCKY BALBOA.

Adam Carolla boxing Charles Herman-Wurmfeld
This entry was posted on Tuesday, April 1st, 2008 at 6:43 am and is filed under AICN, Comedy/Laffs, Reviews, Romance, Sport. You can follow any responses to this entry through the RSS 2.0 feed. You can skip to the end and leave a response. Pinging is currently not allowed.

One Response to “Vern Gives You… THE HAMMER!”