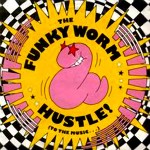 My friends I am here to tell you about a new comedy called SUPERBAD. What this is about is two young gentlemen named Seth and Evan. Seth is a fat guy with curly hair. Evan is taller and skinnier and wears a hoodie. The story begins with a phone call. Evan answers while opening the refrig– ah, fuck it, you guys already know what it is. I just want to agree with the whole world that it’s on the top shelf of comedies in recent years.

I like the down-to-earthness of this movie. It takes place over two days. Nobody’s trying to save the world or prove their innocence or even get married. They’re just trying to buy booze to impress some girls. There’s not a villain. There is a bully but he enters and exits in a grand total of two short scenes. Most of the movie is about two friends yelling at each other, and they do have a bit of a falling out, but there’s no phony misunderstanding or big blowup that separates them so they later have to make a speech to explain themselves and prove their sincerity and make up. They steer clear of most of the usual bullshit. 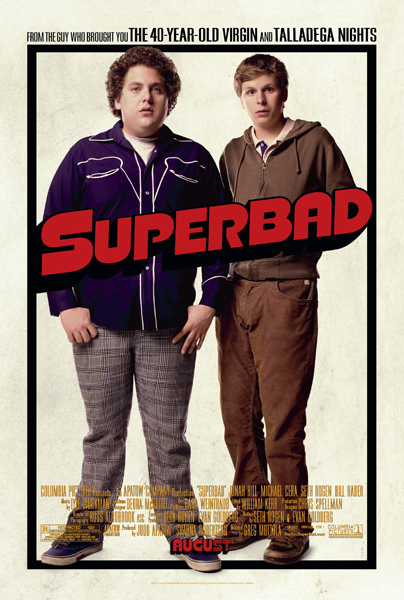 The movie this will be compared to most is DAZED AND CONFUSED, because both are slice of life/coming of age/underage drinking movies. DAZED is a well made movie and if you grew up in Texas in the ’70s I’m sure it would mean more to you than SUPERBAD would. But to me personally this one is better because it has about thirty-five to forty times more laughs. It’s one of those movies where you miss alot of the dialogue because people are laughing so hard. The personalities of the characters are funny in themselves and you can tell they must’ve done multiple takes of just about everything and put together all the stuff that made them laugh the hardest. But made it feel right, it doesn’t have that random stitched-together-skits feel of ANCHOR MAN and those type of movies. Nobody’s gonna get attacked by a bear in this style of comedy, they stay roughly somewhat fairly true to life.

For me the biggest obstacle the movie had was that I’d seen that same trailer ten thousand times in the past couple months. So you know alot of the scenes that are coming and they gave away one of the more emotional parts. I wish I hadn’t seen that thing so many times but the good news is it doesn’t give away all the best jokes, because there are way too many jokes to give away.

Anyway there’s no nudity in the movie (www.bangbus.com) and very little violence (except to cars) but it has some of the foulest conversations you will hear other than in real life actual conversations between humans. Well done.

The cast is good all around but especially the two leads. Michael Cera (Laurel) has a hilariously authentic awkwardness with every line he says and every facial expression he makes. Jonah Hill (Hardy) is the more aggressive and obscene of the two but he is just as vulnerable as the other guy. My favorite line in the whole movie is at the end when he tells Evan he’ll call him later and his way of sounding adult in front of girls is to say “I have your information.” Also you feel sorry for him because he gets spit on, puked on, bled on, hit by two different cars, hit in the head with a baseball bat and attacked by cokeheads. (But not by a bear. Like I said, realistic.)

You know what, picture Charlie Brown with hair and a young John Belushi in thrift store clothes trying to bring liquor to a party because they think it might get them laid. Throw on some funk music and you got SUPERBAD. That’s one thing that probaly hasn’t been covered too much: good ironic use of funk music. Because real ’70s funk is the best way to show that a character is cool and confident it’s also funny to play for some nerds walking in slow motion or dancing bad. Some of the shit is a little disco for my tastes but mostly they did a great job on the soundtrack. They got one of the better Rick James numbers (“Bustin’ Out”) and a great pick from Curtis Mayfield (“P.S. I Love You”). I’m so thankful they didn’t just take something off the SUPERFLY soundtrack or Parliament songs from some cheesy Funk For Rookies compilation they bought off TV. Best of all they got an original end credits theme from Bootsy Collins backed by an all star band of his JB and P-Funk colleagues.

I can’t speak for how teens would relate to this movie, but it definitely connects with human awkwardness in general. So unless you are Shaft or somebody who has never felt the firm grip of humiliation and self doubt on your guts I think you can sympathize with the characters. As an old man I also noticed one thing other people might not get out of it in the scenes where SPOILER (I did the spoiler before the spoiler this time, that was awesome) the girl Evan’s had a crush on turns porno queen on him and talks about giving him “the best blow j ever.” Usually in movies it’s supposed to be funny fantasy fulfillment when a naked girl attacks a nerd like that. (Unless the girl is about to turn into Freddy Krueger.) But for him it’s too much, almost a turn-off, and to me it’s a good commentary on the sexualizing of young women in today’s pop culture. I’m honestly not a prude but it’s sad how many girls today have role models from moronic reality shows, leaked sex tapes and that fucked up cartoon where the girls with giant eyes talk on their cell phones and buy clothes. And I guess with that easy access to porn you kids have there probaly really are girls trying to live up to those type of images. Maybe if Charlie Brown with hair was just trying to get laid like used to happen in the ’80s or in AMERICAN PIE that would be great but this is his little red haired girl, he actually likes her, he’s not trying to bring her on the Bang Bus.

Greg Mottola Jonah Hill Michael Cera Seth Rogen
This entry was posted on Thursday, August 16th, 2007 at 2:13 pm and is filed under AICN, Comedy/Laffs, Reviews. You can follow any responses to this entry through the RSS 2.0 feed. You can skip to the end and leave a response. Pinging is currently not allowed.

One Response to “Vern Gets SUPERBAD!!”