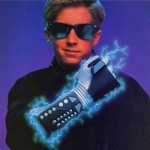 For the batch that comes out this week though I found time to watch them and I was impressed. The one I had the highest hopes for was WHO CAN KILL A CHILD? which is a creepy sun-drenched Spanish horror movie in the vein of VILLAGE OF THE DAMNED. But I already heard that one was good before, so a more impressive find is THE GLOVE, the b-picture in their latest “DRIVE-IN DOUBLE FEATURE” along with SEARCH AND DESTROY.

They’ve been doing this series for a while with basically the same concept as G’HOUSE, they put two old drive-in appropriate movies together as a double feature and they include vintage theater promos and trailers. SEARCH AND DESTROY seemed pretty cool, I didn’t really get into it but I’ll have to go back and pay more attention next time. THE GLOVE, though – this one is a winner.

The movie opens with a black on red graphic of the titular glove, accompanied by a theme song all about this glove and how fearsome it is. Then we see a sleazy prison guard leaving work with his mistress. Suddenly he’s ambushed by THE GLOVE, which happens to be worn by Rosey Grier.

I’d never talked to anybody who knew of this movie before, but I’d admired the VHS cover. If you’ve seen that you sort of know what the Glove looks like, but the cover exaggerates it. On there he looks like some comic book super villain, a guy who could beat Darth Vader in a bar brawl. And he’s got two gloves – in the movie he only has one, like Michael. In that painting it has spikes on it, his chest guard looks like samurai armour and the helmet makes him look like a robot. In the movie it’s riot gear, it’s not from outer space. But it is Rosey Grier wearing it, so it’s pretty menacing.

We learn later that The Glove was designed to replace billy clubs for mean riot squad cops in the ’60s, but later it was outlawed. It’s “5 pounds of lead and steel” but I guess there must be something else in there because the hero jokes that it takes two people to lift it. Whatever the deal is, the combined forces of The Glove and big tough Rosey Grier equals something like super powers. He not only beats the hell out of this prison guard, he literally tears his fuckin car apart, knocking dents into it and pulling pieces off of it. You don’t want to fuck with The Glove.

Next we meet our hero, down on his luck bounty hunter Sam Kellog, played by John Saxon. This is exciting because I’ve always liked John Saxon when I see him in movies like ENTER THE DRAGON, BLACK CHRISTMAS and NIGHTMARE ON ELM STREET, but I’m pretty sure this is the first time I’ve seen him as the lead. The movie is actually much more about his bad luck than it’s about The Glove, which is only one of the bounties he’s after. It’s kind of like an old private eye story so he even gets to do voiceover narration. The guy is divorced and broke. He’s only happy when his daughter visits, but he’s behind on his child support so that could come to an end if he doesn’t dig up some cash quick.

You don’t see too many guys like John Saxon in movies anymore. He’s a tough guy but more of an everyday tough guy than Steve McQueen or somebody. You can see why he plays cops all the time. He looks like a real life cop or a football coach or maybe a fire fighter. Even at this time (he was in his mid ’40s) he had a combover, but because of the way he carries himself he can still be kind of a ladies man, and he almost manages to steal Joanna Cassidy away from her rich husband. But she’s scared off by his dangerous life. On one hand, he lost the girl, on the other hand he’s dangerous. So it’s not too bad a loss.

Sam finds out about this Glove case. Turns out the guy is called Victor Hale, he’s an ex-con who’s been beating down a series of prison guards. And he stole The Glove and the riot gear from the first guard he went after. There’s a $20,000 bounty put on the guy by the prison guard union. Kellog needs that money and that feather in his cap, so he investigates. When he talks to Hale’s grandmother it sounds like Victor’s not all that bad – the reason he went to prison was for getting revenge on the pimp who mutilated his little sister. And then the sadistic screws in the prison tortured him with The Glove. So there’s more revenge in the works.

Meanwhile Sam goes after other smaller bounties to keep afloat moneywise, gets involved in some gambling and in Joanna Cassidy. There are several major scuffles, all worthwhile. The fights are a little slow and stiff but they make up for it with clever moves like when he hooks a guy’s head with a swimming pool net, or when he swings on a meat hook to kick a guy in a meat packing plant, or in the same fight when he and the other guy are beating each other with cow bones. The occasional Glove attacks are good too. When Victor beats up a screw in his bathroom he ends up smashing the toilet, the sink, the shower, and the guy.

The other thing that makes the movie a surprise is the human touches. Kellog is a tough guy and he does some bad things, but his main goal is to be able to visit his daughter (theory of badass juxtaposition). His first bounty turns out to be a gay man, but he doesn’t seem too put off by that and barely comments on it. Later he has to go after an old lady who stole petty cash from her boss. He feels sorry for her so he takes the money and lets her go, then tells the boss she “escaped.” Right after we’ve seen this soft side the movie gives us our first look at Victor Hale’s life outside of attacking prison guards. Up until this point he might as well be a monster. He’s had no dialogue, he’s worn this menacing outfit and he’s been going on a rampage. Most movies of this era would be happy to leave him as that type of villain. But THE GLOVE surprises us by revealing that this guy’s a genuine sweetheart, and not just because he killed that pimp. He finds a little kid vandalizing the stairwell in his apartments. He wants to give the kid a positive influence so he brings him in and gives him a lesson at playing blues guitar. You see that? Not only does he care about kids, he plays pretty music! (theory of badass juxtaposition again)

So now we as viewers have a problem. We love both these guys. We want them both to win. We sure as hell don’t want Victor to get caught, but we also need Sam to get the money. Victor is a no-nonsene guy so when he finds out this bounty hunter has been tracking him he just calls him up and tells him to back off. Sam explains that he needs to do it for the money. “It’s nothing personal. You understand that?”

So when they finally do come face-to-face it’s that perfect intersection between action climax and emotional climax. Earlier Sam got to test out one of those Gloves and seemed to like it. Now Victor actually lets him borrow his to make up for the size difference and have a fair fight. You get alot of fighting in this scene but an equal amount of bonding.

This is a real entertaining and unusual movie. Lots of funny lines, weird uses of music and quirky touches. I like how Kellog bets his friend ten bucks he can smash through a table with the glove in one swing. So when he wins his buddy not only has to give him ten bucks, but he has a broken table and all his shit scattered everywhere. And he just kind of frowns like, fuck, shoulda thought this one through.

The director was a rookie named Ross Hagen. Before directing this he had acted in TV westerns and written a cockfighting movie called SUPERCOCK, aka A FISTFUL OF FEATHERS. His other directorial efforts after this have mostly been savaged on IMDb. He’s directed as recently as 2005 but he seems to spend most of his time as a character actor in low budget movies like ALIENATOR, MIDNIGHT TEASE II, ILLICIT DREAMS 2 and THE ESCORT III.

Anyway, THE GLOVE will grab hold of you. It’s a perfect fit. Five fingers of quality cinema. You gotta hand it to THE GLOVE. If the glove don’t smash, John Saxon got his cash. etc.

Joanna Cassidy John Saxon Rosey Grier
This entry was posted on Saturday, June 23rd, 2007 at 3:55 pm and is filed under Action, Comedy/Laffs, Crime, Drama, Horror, Reviews. You can follow any responses to this entry through the RSS 2.0 feed. You can skip to the end and leave a response. Pinging is currently not allowed.

3 Responses to “The Glove”