Vern’s Got A DVD Review For You! WHO CAN KILL A CHILD? 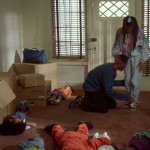 Vern and an obscure horror film I’ve never heard of? Sounds like a great read for a Sunday afternoon to me.

Ever since I reviewed the TEXAS CHAIN SAW MASSACRE ULTIMATE EDITION I’ve been getting screeners in the mail from MPI Home Video. It’s awfully nice of them but I can’t really review all of them, because they’re mostly stuff like THE DORIS DAY SHOW SEASON 4 or a ten hour documentary about the ’70s or COMIC LEGENDS: PHYLLIS DILLER. But they do send me stuff from their Dark Sky label, the same guys who did the CHAIN SAW dvd. And these guys put out good stuff, lots of weird European horror and action movies, mostly things I never heard of. You know, one of these boutique labels that’s like a DJ, always digging to find some weird gem you didn’t know about. I know alot of people have sunk themselves financially by finding and restoring these old obscurities so I have alot of gratitude to the people who do it. Takin one for the team (the team being a metaphor for the human race in this case).

One thing Dark Sky does is a “Drive-In Double Feature” series (SEARCH AND DESTROY and THE GLOVE comes out this Tuesday) that’s the same concept as GRINDHOUSE but for real: two movies with vintage drive-in intros and trailers in between. Good stuff. Another release this week is THE LAST HUNTER which is a 1980 Vietnam War movie made by Italian exploitation director Antonio Margheriti. It’s kind of trying to be like THE DEER HUNTER but it has more explosions, intestines and funky music. And it’s dubbed. So it’s pretty different.

The standout of their new releases is WHO CAN KILL A CHILD?. Now, I know what you’re thinking. “I watch Fox all the time – how come I never seen this show?” But it’s not actually a new reality show, it’s a 1976 Spanish horror film.

I heard of this one before but I didn’t know what it was about. I was always spooked by that title. I like to say it in a quivering voice of outrage, like WHO can kill a CHILD?! WHO?! LOOK AT ME WHEN I’M TALKING TO YOU!

Don’t torture a duckling either, by the way.

From the title and the reputation (the press notes claim it’s “one of the most sought after and controversial horror films of all time”) I figured it was a gruesome slasher movie, but actually it’s more of a creepy CHILDREN OF THE DAMNED riff (which explains why the censored American release was called ISLAND OF THE DAMNED). A vacationing English couple (Lewis Fiander and Prunella Ransome) decide to leave the tourist area for a small island called Almanzora. They arrive in their little boat and see some kids fishing, but when they get into town there’s nobody around. Seems like kind of an OMEGA MAN or QUIET EARTH type of situation, except there were those kids on the shore. And since they find an ice cream cart with melted ice cream still in it it this place can’t have been abandoned for too long.

The horror mostly comes from the mood and the mystery, so it takes it’s time getting to the mayhem. The big turning point is about 50 minutes in when they think they see an old man with a cane standing around a corner. Thank God, an adult! But as they approach a little girl comes up, grabs the old man’s cane and beats the hell out of him. The husband tries to ask her what the fuck she’s doing but the girl just giggles. He tries to carry the old man to safety, but he fails. Next thing you know the island kids have a sickle and an old man on a rope and they’re playing pinata.

This, to an adult like me or the protagonists, is a problem. In our opinion these kids are poorly behaved. Plus, the wife is pregnant, and those little bastards don’t deserve a pinata treat like that. So now that the cat is out of the bag they realize they are dealing with a 28 DAYS LATER BABIES type situation. They drive around in a jeep being chased by crazy little fuckers. And if you want to know the answer to the question in the title, I’ll tell you: Tom, played by Mr. Fiander, he can definitely kill a child. I guess that’s where the movie gets the “controversial” and “shocking” label, it is generally a no-no to fire automatic weapons into a crowd of children in a movie. But come on, dude. It was self defense.

There is kind of a twist at the end, and when things come to a head it gets pretty intense. You learn the importance of child proof scissors, which it turns out would protect more than just the child who is using them. I don’t think I’ve ever seen a movie where a guy stands on a boat swinging at kids like he’s in a batting cage, so I give it points for that. It’s a satisfying conclusion.

I have been accused recently of being a cranky old man who hates the youth of America. It has been alleged that I rant too often about their ringtones, their short attention spans, their giant sunglasses, their vapid media icons, their materialism, their game show tie-in music, their hedonism and appalling lack of giving a shit about any god damn thing in the world, even as their generation is being shipped off and blown up in an endless war and the laws that are supposed to protect their God-given rights are being chiseled away by corporate whore politicians, and it makes me so mad to think about fuck fuck FUCK! Okay, guilty as charged.

This movie is not exactly about that, but it rings true because of that old vs. young tension. To these adults kids are cute, but they don’t understand them. As soon as they talk to the kids and don’t get a response it’s like they’re talking to aliens. We envy youth, we think of ourselves as younger than we are, we fear getting “too old.” Even here in the movie geek community bygone youth is a constant concern, with people trying to “be ten years old again” by willingly watching brainless pap, or fearing that “their childhood” has been cornholed because somebody made a movie they didn’t like that includes a character that they did like when they were young and stupid. Or me, ranting about those ringtone obsessed little sonofabitches talking during movies. I hate it, but I can’t shut up about it. We have a love hate relationship with the children. We like it when they say the darndest things, we don’t like it when they string us up and cut us with sickles as a fun game.

We are the grownups, they are the children, but we know we can’t control them, we secretly fear that they will defeat us. How long can we really keep them off our lawn? And their vulnerability is their secret weapon. If an adult pisses you off you might be able to punch him, with a kid that would be more of a problem both morally and legally. And that’s how these kids got the island. Because WHO CAN KILL A CHILD?

The one aspect of the movie I did think was going too far was the opening credits. There’s a ten minute narrated montage of newsreel footage about children suffering at Auschwitz and in various wars around the world. I don’t want to say that their concern for these children wasn’t sincere, but jesus. I came to see a horror movie, I don’t want to see that. It’s like one of those Save the Children commercials, except it’s a long time ago so you know it’s too late to send money for these kids. What a bummer. But I guess it shows how the attack of the evil children is revenge for all the suffering their peers have had at the hands of adults. To the adults war is natural, to these kids “playing” is natural. So everybody’s fucked. The whole human race. The whole team.

The transfer looks real nice, the colors remind me of photos from the ’70s more than it reminds me of other movies from the ’70s. There’s an interesting interview with the cinematographer where he explains they were influenced by THE BIRDS and NIGHT OF THE LIVING DEAD to shoot it like it was real, not expressionistic like a horror movie. The whole movie takes place in broad daylight, which I always like in a horror movie because you don’t see that too much. There’s also a pretty good interview with the director.

Of course, those same spooky young people I fear would be unlikely to appreciate this movie, because it is a slow build and the violent scenes only happen every once in a while. It’s more about a creepy mood and a sense of impending doom than it is about constant thrills and chills. But for those who appreciate this kind of thing, take a look, it’s worth checking out.

p.s. I don’t actually have a lawn I’m just joking with you kids, don’t worry about it please don’t kill me

This entry was posted on Sunday, June 24th, 2007 at 8:52 pm and is filed under AICN, Horror, Mystery, Reviews. You can follow any responses to this entry through the RSS 2.0 feed. You can skip to the end and leave a response. Pinging is currently not allowed.