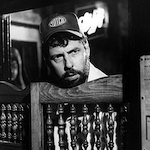 During my recent two-week TEXAS CHAINSAW binge I learned of the existence of this movie I’d never heard of before. It was written by Kim Henkel (co-writer of the original TEXAS CHAIN SAW MASSACRE, writer/director of part 4). It also stars Lou Perryman two years before he played the lovable loogie-spittin’ sidekick L.G. in TCSM part 2. (He was also assistant cameraman on part 1.)

But this is not a horror movie by any stretch of the imagination, in fact if I was gonna compare it to any movie it would have to be CLERKS. Because this is a low budget, 16mm black and white slice of life movie about some regular people hanging out in a bar called The Alamo. It’s the last night before it’s gonna get demolished, and almost the entire movie takes place inside, in the parking lot, or at a house right across the street. (The opening scene is the farthest you get from the Alamo, it shows one of the characters driving to The Alamo in real time.) 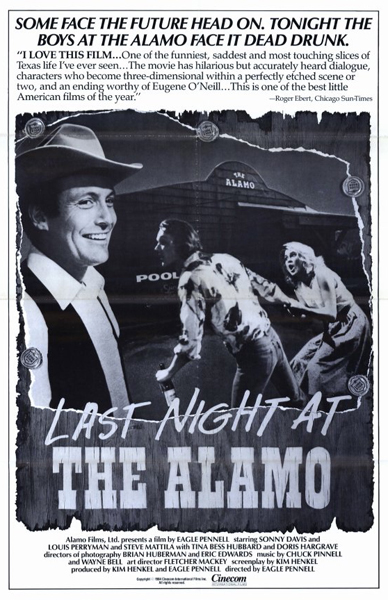 But these characters are regular working class Texans circa 1984, so instead of STAR WARS they complain about their wives and their bosses.

The three main characters are (in order of appearance):

Ichabod (Steven Matilla), a kind of whiny Owen Wilson type. He opens the movie in a huge fight with his girlfriend and ends up in much worse trouble with her after he gets drunk. And he hates being called Ichabod.

Claude (Lou Perryman) comes in swearing about his wife and beating the shit out of his hat. He has just been kicked out of his house and spends about half of the movie on the payphone alternately arguing with and sweet talking his wife. He thinks she cares more about their house and their carpet than about the family, and he worries she’s gonna want a condominium some day. So you can see that the closing of the Alamo sort of represents the constant changes in our culture and the death of these people’s way of life, but it’s never heavy-handed.

Finally you got Cowboy Regan (Sonny Carl Davis, who apparently was in THE THREE BURIALS OF MELQUIADES ESTRADA). He just walked off his job but is the only lead character who’s not pissed off all the time. He’s a smooth talker who brags that he’s going to use his connections to stop the bar from being closed down. Everybody seems to idolize him, so you hear about him long before he shows up. He also talks about moving to California to be a movie star, because he thinks he’s John Wayne. But one guy, Steve (J. Michael Hammond) is jealous of him and when they get in a fight you find out about Cowboy’s insecurities. Steve keeps pointing out that Cowboy is bald beneath the cowboy hat he always wears, but it never gets a reaction out of anybody. Still, Cowboy’s image starts to fall apart as the night goes on, and his schemes for saving the Alamo seem almost childish by the end.

Kim Henkel also has a part as Lionel, a dude with a huge mustache who doesn’t talk much.

The movie is just as small and sentimental as it sounds, but that’s a good thing. These are great characters because they have all the faults of real human beings but are very likable. They feel like your friends who you are still loyal to even when you know they’re being assholes.

The acting is really good, especially Lou Perryman. If you like him in CHAINSAW 2 you gotta try to see this, because he gets to take it further. You’ve never heard any movie character say “got-damnit” so many times or in so many different ways. Of course, he doesn’t get to give anybody a pep talk after having his face cut off, but you can’t do that in every movie. I didn’t realize that he plays the sheriff in BOYS DON’T CRY. But it looks like that’s the most significant role he’s gotten in a while. This movie makes me think he really oughta have a resurgence. Somebody please remind the Tarantino/Rodriguez Austin Movie Cartel about Lou Perryman and this movie.

update from the future: I have no idea why I didn’t name the director in this review. It was Eagle Pennell, who also did a great movie called THE WHOLE SHOOTIN’ MATCH with some of the same cast.

Austin Eagle Pennell Kim Henkel Lou Perryman Sonny Carl Davis
This entry was posted on Wednesday, October 11th, 2006 at 10:35 pm and is filed under Comedy/Laffs, Drama, Reviews. You can follow any responses to this entry through the RSS 2.0 feed. You can skip to the end and leave a response. Pinging is currently not allowed.

2 Responses to “Last Night at the Alamo”