That one still flounders in rare VHS obscurity, but the director, Eagle Pennell, did an earlier movie that has undergone a rediscovery. THE WHOLE SHOOTIN’ MATCH (1978)  is very similar to LAST NIGHT AT THE ALAMO: very episodic and conversational, black and white, working class Texans working out their frustrations and cementing their friendships while shooting the shit. It even has the same star, Sonny Carl Davis, and in this one Perryman is the co-lead. 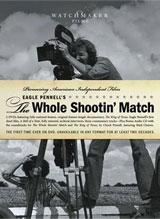 Davis plays Frank, a dick who cheats on his wife and gets in fights, but somehow is kind of a likable character.  Perryman plays Loyd, his tinkerer partner. He’s always in the shed trying to build some contraption they can use to make money – right now they’re trying to be in the polyurethane spraying business, but the sprayer is broken. They’re always dreaming and never achieving. Then they go drink beer and pick up women, sometimes get in fights.

It’s hard to explain exactly the appeal of these movies. Part of it is their simple down-to-earthness. There’s not alot of plot, not alot of big things happening, nobody is the best in the world at something. They’re fuckups but funny guys, people you might hang out with if they were your neighbor or co-worker or cousin. They’re also regular Texans, not actors playing Texan, which is strangely rare in movies. And they’re good ol’ boys but not some redneck stereotype.

The other thing is the cast. Davis and Perryman are a perfect team. They’re so funny and their unbreakable friendship is sweet. They make fun of each other but genuinely look out for each other too. When Loyd invents something that could make him alot of money he calls Frank his partner. The fact that Frank didn’t do anything to help never comes up.

I’ve really liked Perryman in everything I’ve seen him in, but this might be his best performance. Mostly he’s this likable goofball, then when he’s with a woman you can see why she might think he’s handsome, then when he gets ripped off he goes into a belligerent rage that is very authentic. It’s a touching moment when he’s drinking and pissed off and Frank convinces him they should go search for gold. And he’s still pouting but he gets up and goes with him. All his dreams have been crushed and his buddy knows the best thing to do is go chasing after some other ridiculous dream.

Another great scene is when Frank gets in a fight with his cousin Olan (Eric Henshaw), who’s been making moves on his wife. They throw cruel words at each other, it comes to fisticuffs, and Frank almost chokes him to death. And then they feel bad and become friends again. It’s like the ANY WHICH WAY YOU CAN philosophy of friendship.

The others are good too, especially Doris Hargrave as Frank’s put-upon wife Paulette. She seems very real, and while she lets him get away with too much she’s still a very sympathetic character, easy to side with.

The DVD also includes A HELL OF A NOTE, the 28 minute short Pennell made in ’77. Same black and white, same Davis/Perryman team, in the opening they’re roofers who get in an argument with their boss, piss on the roof and get fired. In the end they get in a bar fight. The acting and everything is a little more polished by the time of WHOLE SHOOTIN’ MATCH, but they’re all very enjoyable.

Also included is a documentary called KING OF TEXAS about Pennell’s career and death and how THE WHOLE SHOOTIN’ MATCH changed the world of independent cinema (supposedly Robert Redford was watching it when he decided to start the Sundance Film Festival [without it the Slam Dance and Troma Dance film festivals would have to come up with different names]). They interview all the leads, Pennell’s brother (who does the music on the movies), his producer/writer Lin Sutherland, his parents, even Willie Nelson (although he just talks about Austin at the time). The director/interviewer is Eagle’s nephew, trying to learn about his uncle.

One mystery is about the title of the documentary. They call it that because after SHOOTIN’ MATCH Pennell had one of those periods where he went and lived it up in Hollywood as the next big thing, developing movies that never ended up being made. He worked with Kim Henkel on something called KING OF TEXAS that was supposed to be King Lear set in Dallas. What I can’t figure out is whether this project belonged to the studio and was taken over by other writers, or if it’s just a coincidence that in 2002 there was a TV movie starring Patrick Stewart called KING OF TEXAS and based on King Lear.

I mentioned this before when Lou Perryman died, but I had a short conversation with him a year ago at a small horror convention. He was there along with his TEXAS CHAINSAW MASSACRE 2 cast-mates Bill Johnson (Leatherface) and Bill Moseley (Chop Top). He talked proudly about that movie and his character but when I mentioned LAST NIGHT AT THE ALAMO he just lit up. He said, “Oh, so you know about Eagle Pennell!” who he’d been talking up in the Chainsaw 2 panel earlier in the day. He kept mentioning THE WHOLE SHOOTIN’ MATCH coming out on DVD, talked about Roger Ebert’s review and how it had shown at his Overlooked Film Festival. On the DVD of course he’s all over the commentaries and interviews and talks about it being the thing he’s most proud of.

I went to the same horror convention this year and saw poor Bill Johnson sitting there by himself. To me the horror icon is almost like the veteran wrestler, just a really interesting life that also makes me sad. They have these achievements in their past that bring us all such happiness, and they are able to celebrate those things, but they also have to sit behind a table and wait for some nerd to come up and pay them $25 to sign the poster he bought on ebay. I see those guys and get excited – “Hey, it’s Candyman!” or whatever, but I don’t know what to say to Candyman, and feel like an asshole for looking at him. He’s not a zoo animal. And it’s gotta be even harder when you’re only in part 2 and in Bill Johnson’s case you’re wearing a mask and you’re a guy who’s more interested in poetry and Shakespeare than in Lucio Fulci but you gotta stay all day at this table. I mean it’s gotta be better than digging ditches, but kind of miserable in a way too.

Anyway, looking at that table and realizing that Lou Perryman might’ve been there to keep Bill Johnson company if he hadn’t been killed, and then watching this movie… it really hits you what a loss it is. He seemed like a really cool guy, a funny guy, a character who entertained those poor guys sitting behind those tables. And also a really great and unique actor that should’ve been in more movies and bigger parts. But at the same time it is a little reassuring to know that he was able to see this movie reborn and talk to people about it. It could’ve easily disappeared and been forgotten, only known as a mysterious IMDb entry to obsessive weirdos like me. Or it could’ve been rediscovered too late for him to be there to talk about it.

Anyway, I’m very glad they went through the trouble to dig this stuff up and make it available again.

Doris Hargrave Eagle Pennell Lou Perryman Sonny Carl Davis
This entry was posted on Sunday, June 14th, 2009 at 2:06 pm and is filed under Drama, Reviews. You can follow any responses to this entry through the RSS 2.0 feed. You can skip to the end and leave a response. Pinging is currently not allowed.

4 Responses to “The Whole Shootin’ Match”