PURSUIT OF HAPPYNESS is actually a pretty good drama/shameless inspirational tale based on an actual guy who was profiled on 20/20 one time. Will Smith stars as Chris Gardner, a dude who, while completely broke, struggles through a highly competitive, unpaid stock broker trainee program. There are 20 people in the program and only one will be chosen to stay at the firm, the others are shit out of luck. I won’t give away whether he ends up getting the job at the end. Who knows? Anything could happen. 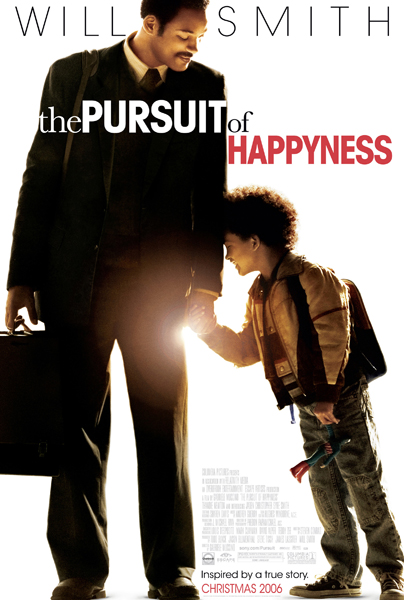 Anyway the hook is that he’s also a single father, and when I said he was completely broke I wasn’t exaggerating. He gets kicked out of his apartment, gets arrested for not paying parking tickets, gets kicked out of a hotel, and there’s not always room at the homeless shelter so he even ends up sleeping in a public bathroom at one point. So the drama comes in how this guy can find shelter for his son, wash his clothes in a sink, then get to the firm on a bus, carrying all of his belongings, and then be the best stock broker trainee in the place. At one point he’s on a break, he gets hit by a car and loses a shoe and then has to go back in and play it cool wearing only one shoe. (I had a similar incident once so it was exciting to be able to identify so closely with the adventures on screen.)

The story would be hard to take if it was completely made up, but since apparently it really happened* it makes for a thrilling story to watch him overcome the odds, and the test screening audience actually applauded his victories. Luckily he doesn’t give too many adorable up-by-the-bootstraps platitudes either. There’s a couple points where I thought it got a little corny though. I hope they cut out the part where he tells his son not to play basketball then suddenly scolds him to “Never let anyone tell you you can’t do something – not even me.” But most of it’s not that bad.

[* Yeah right, like HOSTEL really happened too, huh? I’m giving movies a benefit of the doubt here that they have not earned. But I read up on it and at least according to various media accounts, Chris Gardner did go through adventures fairly similar to what’s depicted in the movie.]

This story could try to be gritty, but they approach it more light-hearted. It seems like Will Smith spends half of the movie frantically chasing after buses or subways. One part of the story I liked was that he sells something called high density bone scanners to hospitals. It’s his only source of income, which is bad news since he’s rarely able to sell one. But there are two different points in the movie where a high density bone scanner gets stolen and he has to chase after it. I thought that was cool because I’ve never seen a movie where people fight over a high density bone scanner. Hell, I’m not sure I’ve seen a movie where people fight over ANY high end piece of medical equipment. But maybe that’s just a genre I haven’t been exposed to enough.

I figure the bone scanner probaly comes from the real guy (I read that he did sell medical equipment), but I will still credit writer Steve Conrad for keeping in a few quirky details like this. He’s the same guy who wrote THE WEATHER MAN with Nicolas Cage, which I thought was pretty good. Both are heavily narrated movies about an unsatisfied fuck-up blowing it with his wife/girlfriend but trying his damndest to be a good father while pursuing his dream job. This guy does better with the fatherhood than the Weather Man does, though.

The girlfriend, by the way, is Thandie Newton, my least favorite part of the movie. I used to think she was exotic and glamorous or something but after THE TRUTH ABOUT CHARLIE and CRASH (not the Cronenberg one) she’s starting to become unbearable. She has this weird Eartha Kitt meets Cruella de Vil vibe going. She’s guilty of a little overacting here but I can’t entirely blame her. All she really gets to do is cry and yell at Will Smith, so it would be hard to come off sympathetic.

She’s not used as a villain though. In fact, there are no bad guys in the movie at all, which is a nice touch. The weird thing is that even everybody at the stock broker joint is incredibly nice. Nobody is mean in the movie, even the people who steal his medical equipment aren’t that bad. In fact some people might think the movie is a republican fantasy where nobody is ever victimized and sure times are tough but if these other homeless people would just show some inititiative like Will Smith they could all be millionaires.

And then if you really start thinking about it it might bother you that this guy’s quest for happiness ends in being a millionaire. (or does it? I won’t give it away. Nobody knows what will happen.) Because there’s more to life than making lots of money. Even if the real Chris Gardner bought a Ferrari from Michael Jordan, owns more than 200 suits and wears two $10,000 watches according to the articles.

There are more noble goals than owning a bunch of fancy, shiny shit. And in the movie, why didn’t he try to get a real job first? Wasn’t it irresponsible for him to work for no pay when he had a son to take care of? A son he insisted on taking with him even though his girlfriend, who had a job waiting for her, wanted to take him? I mean if he wants to sleep in a bathroom to become a stock broker that’s cool but if he hadn’t pulled off the 1 in 20 chance that would be a pretty big fuck you to his son. “Sorry son, I want to have a Ferrari later so we can’t eat food for a while.”

But I don’t think that would be a fair reading of the movie. If it was something everybody could do, or should do, it wouldn’t be a movie. It’s an interesting story because this guy tries something so crazy and pulls it off. Like John McClane, only without violence, and with a son, and not as cool, but still okay.

My favorite scene in the movie (and one that apparently really happened) was where he had to go straight from painting his house to jail, and then in the morning went for his interview for the internship. Wearing a sweaty undershirt and covered in paint. Ain’t that the truth. The difference between this character and the Weather Man, or you and I, is that he is able to get into a situation like that and then make it work for him. The lucky son of a bitch. I wonder if he would loan me some money.

I gotta give Will Smith credit for this one. I mean he was impressive in ALI but at the same time, he was no Muhammad Ali. So it made him look bad. This time he really does pull off a serious role where he never once slips into that horrible Big Willy thing he does in most of his movies. And it was a real good idea to cast his real life son Jaden Smith as his 5-year old kid. He’s a cute kid who perfectly plays a confused kid not sure what exactly is going on, and the genuine bond between the two is obvious.

If the movie catches on, and I think it probaly will, there might even be some awards talk for Mr. Smith. It’s a good performance in an effective feel-good hollywood deal so it seems like the kind of thing those suckers go for. And I don’t really mean that in a bad way. The movie kind of reminded me of ERIN BROCKOVICH a little bit in that I knew it was corny and pulling my strings but I was able to enjoy it anyway. Also like Erin Brockovich I’m pretty sure there’s a cameo by the real guy. At the very end a dude in a suit walks by and Will Smith does a double take and gives him a funny look, so I figure that’s the real guy. If not, I wonder what that guy did that rubbed Will Smith the wrong way. I guess we’ll have to wait until part 2.

By the way, the movie takes place in 1981, and the Rubik’s cube plays an important role in the plot. I guarantee you they end up making promotional movie logo Rubik’s cubes at some point. Mark my words. Also, if you’re wondering why it’s spelled HAPPYNESS, there’s a nice little touch at the beginning where he gets pissed off because “happiness” is spelled wrong on a mural at his son’s daycare. And he has a commitment to excellence. I hope the overseas distributors change the spelling to HAPPINESS to avenge Americans for changing the spelling on THE FERPECT CRIME.

I never went to one of these test screenings before. I’d actually recommend it to all movie fans. When you see the survey that asks you whether the movie drags in parts or if Will Smith was excellent and what age and gender you would recommend the movie to, you have a more complete understanding of how movies become so stupid and homogenized. And there are these guys running down the aisles picking out certain people and asking them what they put for question #1 and then frantically yelling numbers to other people and getting averages. And I mean I’m not gonna pass judgment on my fellow test screeners but I’m pretty sure I spotted a few knuckleheads in that crowd, I’m not so sure anybody should listen to their artistic advice.

I guess they try to narrow it down a little because on the pass it said that you couldn’t come in if you smelled bad or were “dressed inappropriately,” and you had to be between the ages of 21 and 49. But other than that it could be anyone.

Oh well, there’s your heads up on that one. Now it’s back to my true work of watching the Van Damme movies everybody recommended to me last time.

Thanks for the review, Vern! Have fun with the movies — there are so many great ones to chose from…

Gabriele Muccino Jaden Smith Steve Conrad Thandie Newton Will Smith
This entry was posted on Friday, March 17th, 2006 at 11:28 am and is filed under AICN, Drama, Reviews. You can follow any responses to this entry through the RSS 2.0 feed. You can skip to the end and leave a response. Pinging is currently not allowed.