Vern gives a Van Damme in SECOND IN COMMAND!!!

Hey folks, Harry here with another great review from Vern. Like Vern, I too have seen Dolph Lundgren’s directorial debut… who wouldn’t? Fucking He-Man/Ivan Drago’s directorial debut!!! And actually – while funky as fuck and some silly ass kidnapped drug whores in Russian brothels… I dug the sheer joy of bloodletting he let loose. Here’s Vern with Van Damme’s latest…

Most people around here know by now that I’m partial to the Steven Seagal pictures. And with The Steven Seagal Blues Band (who I think oughta be called “Steven Seagal and the Hard to Kill”) coming to Seattle in a couple months I probaly oughta be putting my Seagalogy studies into overdrive to prepare. But my New Year’s resolution for 2006 is STRIVING FOR EXCELLENCE, and I intend to strive all year long. So I’m not gonna stick with what I know, I’m gonna start trying out new things, becoming a more well rounded individual. With that in mind I recently watched Dolph Lundgren’s directorial debut (Read it here!) as well as Jean-Claude Van Damme’s upcoming May 2nd release SECOND IN COMMAND. 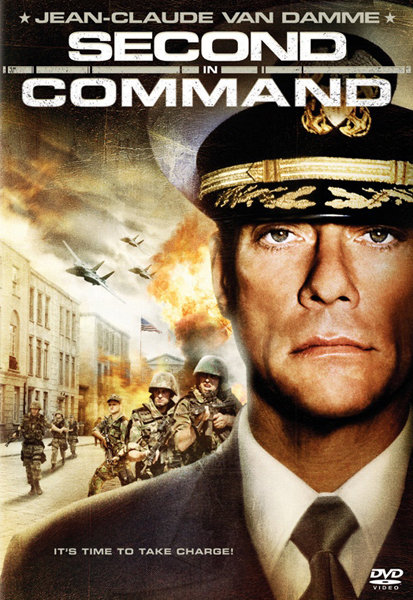 Because of my intense deliberations on Seagal, I’m sorry to say that my Van Damme knowledge is out of date. In fact, the most recent Van Damme picture I’ve managed to watch all the way through was KNOCK OFF. That played in theaters, if that gives you an idea of how long ago we’re talking. So it was interesting to see what Jean-Claude is doing in the DTV medium.

In SECOND IN COMMAND, Van Damme plays the new military attache to the US ambassador in a country called Moldavia or Muldovia or something like that. Let’s just call it Syriana. It’s supposed to be a peaceful country, but he’s literally just off the plane, gets dropped off at the hotel for a quickie with his girlfriend when he hears gunshots in the lobby. I always thought because of DIE HARD’s ingenious detail that Bruce has to fight with no shoes on, it should be tradition for action heroes to get stuck in various stages of undress. This was a perfect setup for Jean-Claude to have to fight communist hardliners while wearing only a hotel bathrobe or towel, but I guess they’re saving that for if there’s ever a SUDDEN DEATH 2. (Which there oughta be.)

The new president of Moldavia/Syriana was elected a week ago, but there’s some angry communist protesters surrounding his pad and his traitorous chief of staff orders the military to shoot a protester, making the president look bad. This could be trouble for democracy so Van Damme, a fan of democracy, swoops in, gets the president, and delivers him to the US embassy. The ambassador gets killed by an RPG, so Van Damme, being SECOND IN COMMAND, suddenly becomes FIRST IN COMMAND. But later it turns out there was a bureaucratic screwup, so he becomes SECOND IN COMMAND again. So the title is safe. Anyway, the embassy has a few soldiers on hand but very few weapons, and the relevant armies are six or more hours away. The place is surrounded by heavily armed militias. So it’s kind of like THE REVOLUTION WILL NOT BE TELEVISED meets ASSAULT ON PRECINCT 13. But with Van Damme. I think I mentioned that already, Van Damme is in this one.

The style of the movie kind of surprised me, it’s more modern than most DTV action. It’s all handheld for a more realistic feel. And until some phoney helicopters come in at the very end, the production values are decent too. There are tanks and helicopters and what not but most impressive for this kind of thing, there are extras. They have enough people to pull off a semi-convincing protest and riot. The battles are real chaotic and it seems like a deliberate, realistic choice instead of just bad staging. I do have to complain though – if anything, alot of the action here is too realistic. When I see Van Damme, I want to see him standing up on moving motorcycles and shit like that. I don’t want to see some messy gunfights where you’re not sure who shot who.

Like Seagal, Van Damme manages to fight alot less than he did in his earlier movies. He spends most of the movie strategizing rather than fighting. But you get the feeling he can still move. When he does get involved in the action, alot of the time it’s just guns. He does do one good gun move where he tricks a bunch of guys into shooting each other. Saving himself bullets. But when you have a movie starring a kickboxer you want to see some damn kicking. The weird thing is, he only fights hand-to-hand with two guys in this movie, and both of them are bald. I don’t know what the deal is. Maybe Van Damme hates bald people, maybe bald people hate Van Damme. Whatever it is, this is what we want in a Van Damme movie. The first Van Damme vs. baldie fight is short but the undisputed highlight of the movie.

At this point there really is no further damage that can be done to the nuts, so he caps it off by grabbing the guy by his bald head and using both thumbs to crush his eyeballs. I believe Seagal did this same move in MARKED FOR DEATH, but I’m not gonna criticize Van Damme for doing the same move, because it’s like a great standard, you want to see everybody’s different version of it.

Speaking of the old classics, now would be a good time to bring up that Van Damme doesn’t ever do the splits in this one. Like I said, I’m out of touch, maybe he quit doing the splits a long time ago. But it was still kind of disappointing. It’s like going to see Prince and he doesn’t sing “Purple Rain.” But due to the excellent destruction of the balls and eyeballs I’m going to forgive it. This time.

The director is a guy named Simon Fellows, who did Wesley Snipes’s 7 SECONDS. Both movies have decent direction, not too bad and fairly watchable, unlike, say, Wesley’s UNSTOPPABLE. But they’re not truly great action movies and they’re not ridiculous enough to transcend the need for greatness. I think maybe they try too hard to not be stupid. Personally I would rather see Van Damme in absurd situations like impersonating a professional hockey goalie while fighting terrorists in SUDDEN DEATH than in a serious thriller about political turmoil in Europe. Watching Dolph and Van Damme reminds me of why I like Seagal so much. His movies have so much more personality. They’re crazier. You notice his weird obsessions and sometimes funny shortcuts that the directors take. They might be dumber movies, they might be less competently executed, but they’re usually more fun to watch.

Still, I got to give Van Damme credit for still going at it and, in fact, striving for excellence. He doesn’t toss them out as fast as Seagal, and he loops his own dialogue. I’ll have to watch his other DTV work, see what he’s about these days. If anybody knows what the best ones are, let me know. (DOUBLE TEAM is my personal favorite Van Damme movie that I’ve seen. Even Seagal can’t top that one for weirdness.)

DTV JCVD Simon Fellows
This entry was posted on Monday, March 13th, 2006 at 6:02 pm and is filed under Action, AICN, Reviews. You can follow any responses to this entry through the RSS 2.0 feed. You can skip to the end and leave a response. Pinging is currently not allowed.

One Response to “Vern gives a Van Damme in SECOND IN COMMAND!!!”