All across the world, in many different nations and cultures, families and individuals have many cherished traditions that they follow every winter holiday season. For some its the eggnog or candy canes, a special angel ornament they pass on through the family to put on top of the christmas tree, or everyone opens one present on christmas eve or who knows, ANYTHING.

Well in my opinion if I had been able to celebrate the holiday outside of the limits of the correctional facilities in recent years i’m PRETTY fucking sure my first tradition would be to read “junkies christmas” from william s. burroughs Interzone. This is the story of a fucking low life like many I know however he is able to learn the spirit of christmas and help others who need his knowledge and posession of certain illegal medicines. if its not already this should be on tv every year like the charlie brown cartoons.

Of course my second and more important tradition would be to watch my all time favorite christmas movie – the one starring Bruce Willis as Mr. John McClane. Bruce singlehandedly takes down a moneygrubbing so called terrorist operation that takes over his estranged wife’s office building on Christmas eve. Although with a strong action movie feel and taking place indoors instead of the snowy wilderness, this picture is fucking PENETRATED with the sounds of christmas, from the run dmc rap tune to i believe handels messiah.

So this year as the holiday season approaches I was able to rewatch Die fucking Hard as some of my buds in the guestbook call it for the first full viewing since the late 80s. 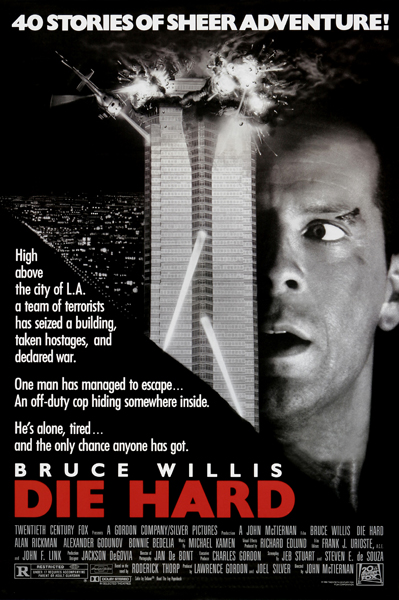 There are some items in life that only grow or blossom while others fade away or die. A man’s passion for a great film such as bruce willis’s die hard can only grow, even while his world view begins to mature. That is why a motherfucker such as myself can take a look and see how die hard no longer reflects his (my) values on the cusp of the millenium 2000, without losing ONE SINGLE ounce of respect for Mr. Bruce Willis, even outside of the tv comedies which he is most known for.

The filmmaking techniquery of the die hard film is established immediately with the scenic photographing of the landing plane, where bruce is told to take off his shoe, reveals his holstered gun and says “don’t worry, I’m a cop.”

Now I’m no fan of cops however i must admit it is good to mention from the get go this dude is carrying a gun which will later be used in the movie, and also will not be wearing shoes.

Bruce is a conflicted type hero very much of the ’80s movie heritage of which he is most definitely a part. Coming to LA to spend christmas with his wife and kid, it is revealed he lives in a different city than his wife and right away gets in an argument with her, knowing all along that he is fucking things up. Before he can even say I’M SORRY three times fast the gal is held hostage by a group of germans who take over the building and plan to steal all the money. Bruce sneaks off with his little cop pistol and the rest of the film tells the story of how one man can kill all of the terrorists by himself using makeshift weapons and detective work – all so he can make up with his wife.

Now especially at christmas time a motherfucker that watches this movie may very well believe it is meant as a jesus type story. The part of Jesus is played of course by Bruce, who sacrifices himself to save the other people in the building. The disciples include the cop Bruce talks to over the walky talky, who follows his teachings even while the commanding officers and fbi don’t believe in Bruce and even hope to get him out of the way. I don’t know maybe the other 11 are the guys he mentions from his squad who are taking bets on Bruce. Also judas is played by the smarmy fucking yuppy cokehead who pretends to be bruce’s friend but turns him in to the evil king Hans Grueber.

This yuppy type character by the way was a popular character in the films of the era such as robotcop. They always wear suits, snort coke, and are more aware of being an asshole than the real guys like this. These fucks are always getting involved in some white collar crime and every once in a while if they happen to end up in maximum security they like take out janey.

“Mickey Deadly? You ordered a janey?”

So back to the jesus. Bruce is crucified when he walks barefoot across the glass. This is when he dies as far as on a symbolic level. at first he seems to have retired to his fate and tells the walky talky cop to apologize to his wife for him. however he changes his mind and comes back to life (again i must point out this is in a metaphorical way) to ascend to the heaven of the upper floor of the building.

When Bruce finally sees his wife again it is a dramatic type lighting as he steps out with his arms raised like on a cross. This is a very christlike portrayal and so what do you think his wife says? That’s right, she says “Jesus!”

Now okay okay, i admit this is a very good argument. BUT i believe that more than that this is a film about RELATIONSHIPS. Bruce climbs an elevator shaft, shoots some guys, wrestles a guy grunting “motherfucker motherfucker”, hangs a dude from the neck by a chain, jumps out the window from an explosion using a fire hose as a bungee cord, kicks through a window with barefeet, blows up the bottom of the building, and of course walks over the glass with barefeet – all so that he gets the chance to apologize to his wife in person.

perhaps this is the type of dedication we all should have to our relationships excluding young gals you pick up, one night stand etc.

The other relationship in this work is the friendship between Bruce and the cop who he first “meets cute” by throwing a dead body on the front of his car and firing machine guns at him. However these two characters never meet face to face until the end of this film, but they develop a bond over the walky talky to discuss the terrorist action, the interference of the fucking feds and their family and career history. I can’t help but reminded of the many of you out there who Write to me in e-mail or in the newsgroups but i don’t know WHO the fuck you are in person. What i’m telling you man is this part of the story plot foresaw the modern age of the internet which in my opinion was not nearly as widespread at that time at least in my experience.

And that brings me to MY relationship with die hard, and how it changed and evolved over the period in which we were separated by a steel fucking cage both literally and mentally. During this period is when i started to get my fucking shit together and go clean, Positive etc. as those of you who read this sight are aware. Well that is why when i come back to die hard I find that in some ways we have grown apart.

I speak in specificness of a part of the story plot about the walky talky cop. Bruce gives the cop some shit about being a desk cop who never fires a gun because when he was a rookie cop he mistook a kid with a toy ray gun for a motherfucker with a real ray gun, and shot the motherfucker. Well at the end of the movie when Bruce and the wife have escaped and everything seems to be over suddenly this blond german comes out ready to kill everybody and the cop lifts up his gun with no trace of fear and blows the motherfucker away. And i’m pretty fucking sure the audience is supposed to get up and cheer and think this dude has redeemed himself.

Now there are two reasons why i wonder if this is really right. Number one. Positivity. In this day if you are a Positive individual such as myself one of the most Negative things to do is to shoot a motherfucker or otherwise kill a motherfucker in some way or method. In my opinion. So although it may be pretty badass and justified to blow this motherfucker away it is only proper to pretend like you didn’t enjoy it. Although i think this sadistic revenge fantasy is a more popularly accepted form of entertainment in 1988 a more naive time before the more socially conscious action films like steven seagal’s on deadly ground, where Mr. Seagal only beats a motherfuckers ass to teach him about the consequences of violence and at the end blows up an oil refinery and makes a speech about the environment.

Secondly. I hate a motherfucking cop. Those of you in seattle during this WTO thing know what i’m talking about. These are not a motherfucker you want to encourage when it comes to the topic of shooting people. Even if this dude did a good job such as in this case you keep a real sober face and don’t look him in the eye. I mean come on if you pat the motherfucker on the back for this he’ll try to shoot somebody every chance he gets. This is the major disagreement i have with die hard.

HOWEVER since this is a film about relationships it teaches me that i can have my disagreements, but i just gotta work them out. We still have a VERY strong bond because we hate this motherfucker hans grueber. This is a dude who SAYS he’s a terrorist but when it comes down to it, he doesn’t even believe in his cause, he just uses it as an excuse to get the scratch. and this is exactly the theme i have been talking about on this sight, these motherfuckers who have no heart, no passion, and they think profit is more important than human rights, nature, or even the artform of the Cinema for fuck’s sake. these motherfuckers are insane and i don’t mind bruce throwing them out a metaphorical window.

Bruce and his wife sure have their differences, such as living in different cities, but they two have a bond because they share that they both are in a building taken over by poser terrorists. ultimately they overcome great odds to come together and it is PRETTY fucking clear in my opinion that due to this dedication these two have a looooooong fucking relationship ahead of them and they will be able to work things out. just as i was able to do with this film.

Keep reading this sight in the coming weeks before christmas as i Write about the other sequels in the die hard trilogy.

Bruce Bruce Willis Christmas John McTiernan
This entry was posted on Thursday, December 2nd, 1999 at 11:40 am and is filed under Action, Bruce, Reviews, Thriller. You can follow any responses to this entry through the RSS 2.0 feed. You can skip to the end and leave a response. Pinging is currently not allowed.